Replimune’s oncolytic virus RP1 is looking like a decent prospect for approval in melanoma following initial data from Ignyte, a mid-stage, though potentially registrational, study.

Even better news for investors is that these data have read-through to another trial, testing RP1 plus Libtayo in a different cancer, with some industry watchers believing Replimune’s asset could be the go-to product when anti-PD-1 therapy has failed. The stock closed up 22% yesterday, allowing the group to launch a $125m fundraising.

Ignyte has multiple tumour type-specific cohorts. Yesterday’s data come from the first 75 patients in the 125 patient-strong melanoma cohort who received RP1, also called vusolimogene oderparepvec, along with Bristol Myers Squibb’s Opdivo.  In this population, the ORR was 36%. Replimune has previously said that an ORR of more than 20% is the approvable threshold in anti-PD-1-failed cutaneous melanoma. 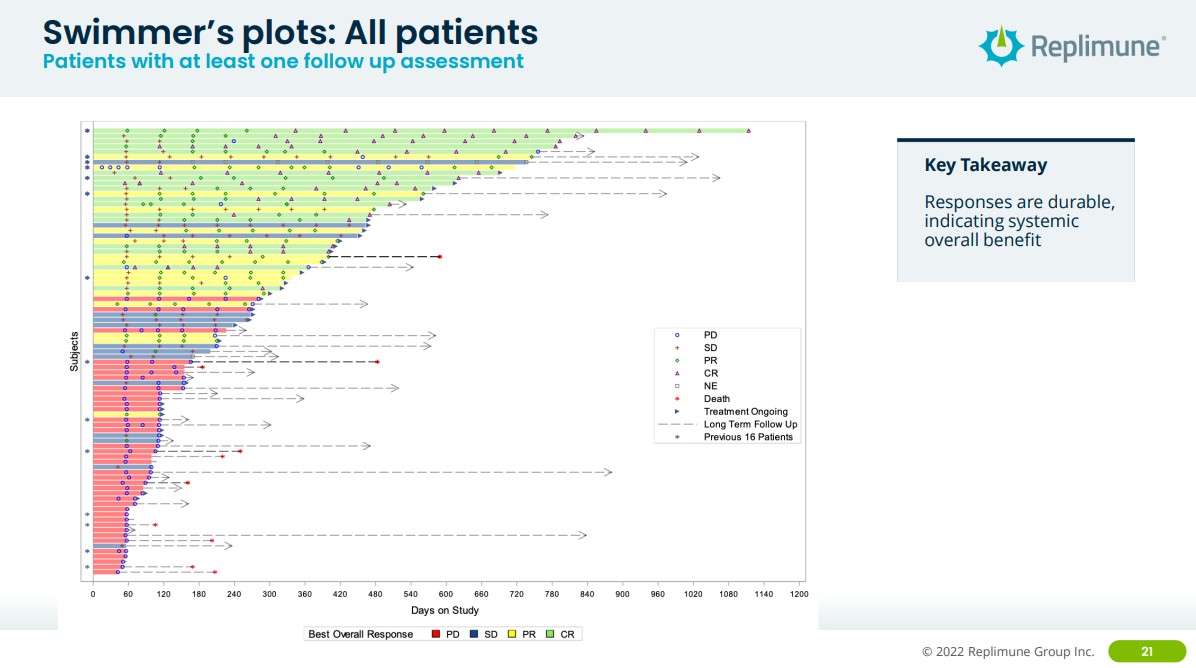 Replimune made much of the drug’s apparent systemic effect, saying that both injected and in un-injected lesions responded, including un-injected visceral disease. Most responses seen were in patients who had not responded to prior anti-PD1 therapy. Median duration of response was not disclosed, but 85% of responses were ongoing with 59% of responders having been treated for at least a year.

The combination was tolerable, with the most common side-effects being consistent with systemic immune activation, likely including fatigue, chills and fever. The only treatment-related adverse events of grade 3 or worse were fatigue (3%) and maculopapular rash (2%).

Full data from Ignyte could come in around a year’s time. The durability of these responses, as well as progression free and overall survival reading, remain crucial to know.

The full data set from this cohort is intended to secure approval for the combo in anti-PD1-failed melanoma patients, and enrolment is intended to be completed this month, with final data due around 12 months after the last patient is treated. The group is hoping to file for accelerated approval, but will need a confirmatory trial underway before applying. What the control arm might look like is the big question.

The Ignyte data should bode well for Cerpass, a randomised and controlled trial described as registrational, testing RP1 as monotherapy and plus Libtayo in cutaneous squamous cell carcinoma. Top-line data are due in the first half of next year and a hit will provide further backing for Replimune's approach.

A clinical collaboration announced with Roche yesterday, over a separate oncolytic project, RP3, suggests that there is already some big pharma interest.

The only possible cloud on the horizon at this point is the means by which Replimune is funded. Two months ago the group arranged a $200m loan from Hercules Capital to extend its cash runway into 2025. Debt financing is fine – until things start to go wrong. All eyes, then, on Cerpass.