A cardiac safety analysis should calm some concerns over Astrazeneca and Fibrogen’s new anaemia pill, though regulators’ views on the hugely complex programme remain pivotal.

All but the most trenchant doubters of roxadustat will today be feeling more comfortable about the future of Astrazeneca and Fibrogen’s new anaemia pill. A major presentation over the weekend threw up few substantial areas of concern with regards to roxadustat’s cardiac safety, and the chances of this project reaching the market look to have increased.

The next hurdle here will be regulatory, and a US advisory panel meeting is virtually assured; the discovery of an unappreciated finding in such a large dataset can never be ruled out. When any final decision might be made is also hard to tell: the roxadustat partners conducted a large and complex clinical programme, and regulators will want to take their time to dig through the data.

Regulatory uncertainty is perhaps why Fibrogen shares opened 8% lower this morning; the possibility of a fund raising on the back of ostensibly positive data is another. The sellside naturally came out in support of the project, though as is often the case in these situations it is what the companies have yet to disclose that is probably most important.

The main thrust of the roxudustat programme was to prove that the project, an oral HIF-PH inhibitor, is safer than erythropoiesis-stimulating agents (ESAs) or epos. These therapies have been widely used for decades to treat anaemia caused by kidney disease, but a black box warning about an increased risk of cardiovascular issues has restricted use to those most in need. Patients not dependent on dialysis, for example, are very rarely given epo.

“The main aim, in terms of us trying to remove the boxed warning, was to show that compared to epo we didn’t further increase the [cardiovascular] risk, compared to the background rate that is already there [for these patients],” John Houghton, Astrazeneca’s global medicines leader, told Vantage. “That is what we believe our results show.” 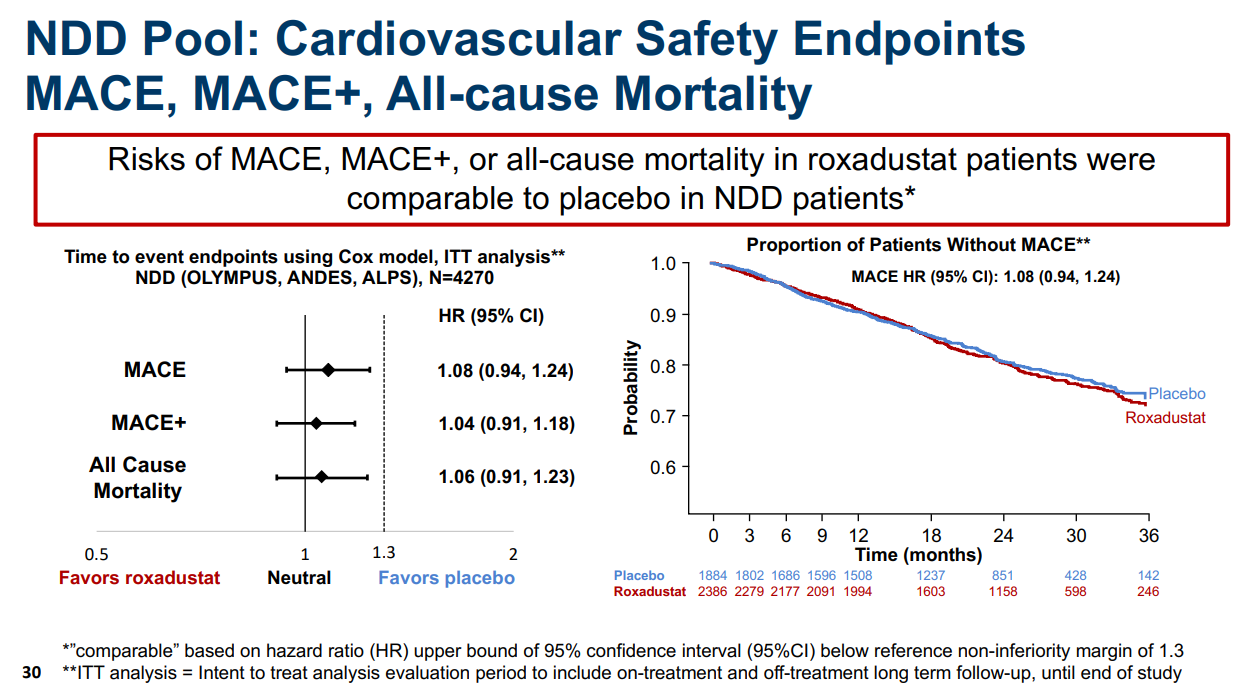 Astra and Fibrogen pooled the data from six phase III studies – three each conducted in non-dialysis dependent (NDD) and dialysis dependent (DD) chronic kidney disease patients – for the cardiac safety analysis. It was this that was presented for the first time over the weekend, at the American Society of Nephrology meeting.

Safety in pre-dialysis patients has always been the pivot point for this project – expanding into this new and very large market would guarantee blockbuster sales, analysts believe, but regulators will need to be supremely comfortable that roxadustat does not harm.

Hazard ratios below the 1.3 level required for non-inferiority on Mace (major adverse cardiovascular events) are encouraging, therefore, particularly when considering that roxa was held up against placebo in these patients. All-cause mortality was virtually identical between the arms; a future issue for regulators here is whether the label should specify particular NDD patients, for example those with worse kidney function.

In DD patients, where roxa was held up against epo, non-inferiority was again shown; a higher than expected rate of patient dropouts in these trials will be another area for an adcom.

Most impressive was the finding in incident dialysis patients – those that have been on dialysis for four months or less – where a significant reduction in risk was found. Again, however, regulators will be taking a close look at this predefined subgroup, particularly as the other side to this story – the remaining dialysis patients, called prevalent dialysis – was not carved out. 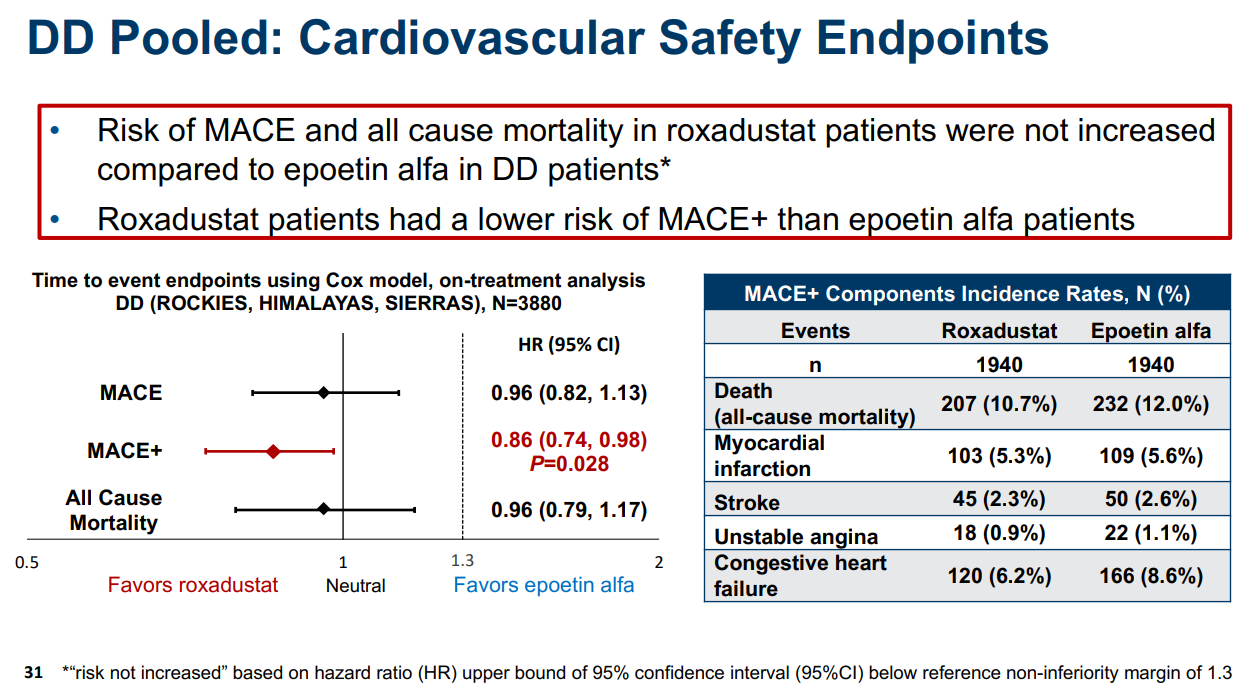 Analysts at Wolfe Research said it could be inferred from the data that roxadustat was doing harm in these patients, though Astrazeneca insisted that any conclusions here were negated by underpowering.

Another point of information absent was a breakdown of the components of Mace for the NDD patients, and this could also highlight areas of roxadustat's weakness.

The final issue to bear in mind here is that the roxadustat partners have a relatively limited time to make the most of this opportunity, in the US at least. On a conference call on Sunday Astrazeneca said generics could arrive as early as 2029 in the world’s biggest drug market; patent data elsewhere suggests arrivals a little later.

This time frame will start to matter a lot more if regulators take their time getting to grips with the dataset or, in a worst-case scenario, ask for confirmatory data in valuable populations like incident diabetes. The hope must be that the dataset is large enough for regulators to find what they want from the results. But it is not implausible that this will take longer than expected. 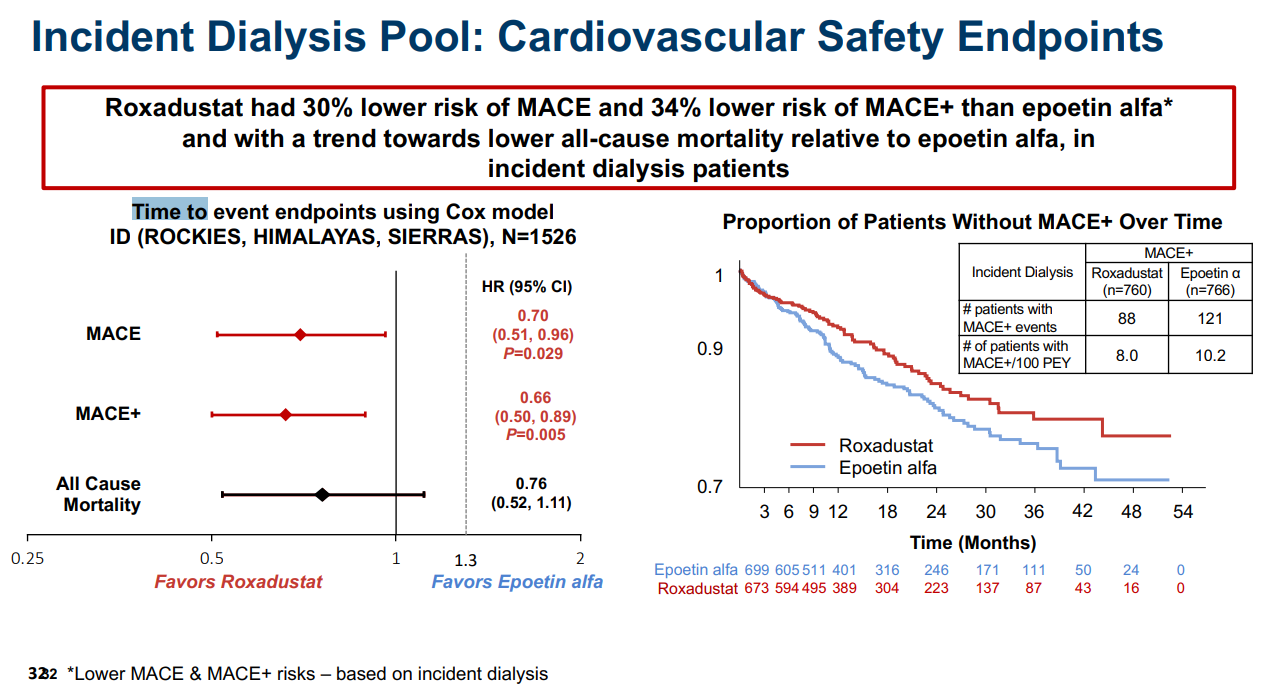