The data were statistically significant, but the market had been hoping for more.

Sage’s zuranolone might have hit in its phase 3 Waterfall trial in major depressive disorder, but the impact was hardly a knockout. The effect demonstrated by the Gaba A modulator was statistically significant but pretty weak, and the company's stock is off 12% so far today.

Zuranolone’s muted showing is particularly disappointing given all Sage did, in the wake of the failed Mountain trial, to maximise Waterfall’s chances of success. The company upped the dose and enrolled patients with more severe depression in an effort to boost responses, and has at least gleaned data it says are good enough for filing. The project’s commercial future also depends on Sage's partner Biogen, and is less clear.

Waterfall tested a 50mg dose rather than the 20mg and 30mg used in Mountain, Sage's earlier phase 3 failure, with the aim of proving a significant benefit on Ham-D-17 score 15 days after dosing. The company had recruited more severely ill patients into Waterfall than Mountain: subjects had to have a baseline Ham-D-17 score of at least 24.

In fact at baseline the patients’ average Ham-D-17 score was closer to 27. The reductions seen at the 15 day point were 1.7 points greater with Waterfall than placebo, a statistically significant difference which the company said on a call today was clinically meaningful. 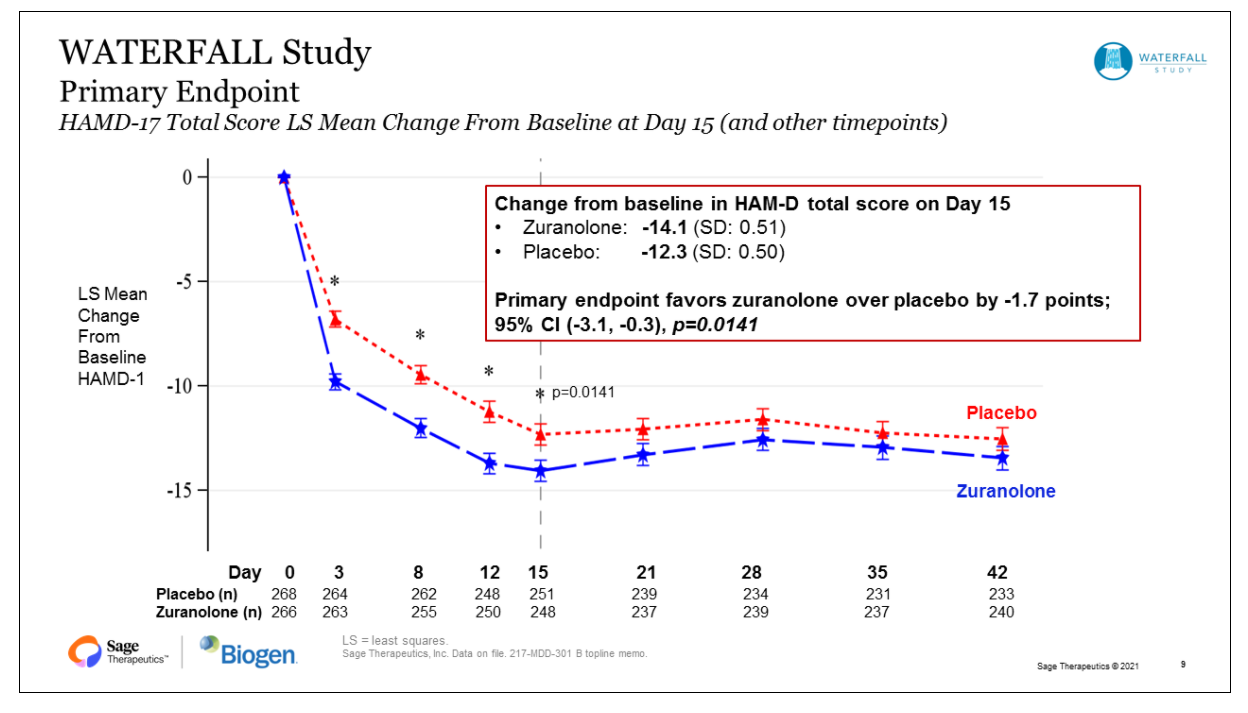 Sage added that the placebo-adjusted reductions in Ham-D-17 seen with standard of care in major depression were 1.3-1.5 points. This makes zura look pretty competitive, but some analysts were hoping for a difference of at least two points, and Mizuho said a reduction of at least three points was "generally seen as necessary for clinically meaningful results”.

Indeed the 1.7-point placebo-adjusted change was only modestly better than the 1.4-point difference seen in Mountain. And, compared with Mountain, the higher dose in Waterfall brought increased levels of somnolence, the rate on drug being 15.3% versus 3% with placebo. The company tried to claim this as a positive on the conference call, saying it meant patients could get a good night’s sleep.

Considering the disappointing efficacy, patients and physicians will presumably not wave away this side effect so easily. A miss on the secondary endpoint, clinical global impression of severity of illness at day 15, will also not help Sage’s case.

Sage management claimed repeatedly that the Waterfall data alone were sufficient for filing. But the group's strategy here is somewhat contradictory: it will in fact wait for another phase 3 study, Coral, testing zura as an add-on to standard antidepressant therapy.

Coral will report later this year, and Sage intends to submit that data along with results from Waterfall and Shoreline, which was an open-label trial in milder major depression patients. Data from postpartum depression trials will also be included.

If Coral fails, of course, the project's application in MDD will rest almost entirely on Waterfall, which would then be zura’s only positive, controlled phase 3 trial. Bearing in mind the FDA’s recent behaviour when faced with drugs with lacklustre phase 3 data, approval, even if Coral fails, cannot be ruled out.

Biogen has clearly been a beneficiary of the regulator's largesse with Aduhelm, but zura’s chances of commercial success are harder to call.

Sage gets a postpartum reprieve