How many million-dollar drugs can health systems tolerate?

Novartis's $4m price target for AVXS-101 fuels concerns that too many new gene therapies could overburden payers without a hard look at how they are financed.

A sign of the sector’s current sensitivity around drug pricing is Novartis's confusing stance over the potential price of its gene therapy project AVXS-101. The company yesterday suggested that $4m would be cost effective, but quickly backed away from any suggestion that it would try to charge that much for the spinal muscular atrophy (SMA) candidate.

The case for gene therapies is that in a single treatment they can correct mutation-driven diseases that require costly lifelong medical interventions, averting costs further down the line. The question is how many can be launched before healthcare budgets start to unravel. The 68 gene therapies forecast to be launched by 2024 – which are expected to bring in $16bn that year – will treat only a small fraction of the 6,000 known single gene diseases, and biopharma continues to rush into this space.

We could charge this, but we won't

Novartis’s statement came as part of yesterday's R&D day for investors. AVXS-101 was acquired with the $8.7bn takeout of Avexis earlier this year, and the Swiss group was so keen to demonstrate the gene therapy’s value that it scheduled as much time to discuss this single project as it did its entire oncology pipeline.

AVXS-101 replaces a faulty copy of the SMN1 gene, which encodes a protein of the same name necessary for the health of motor neurons. With only minimal amounts of SMN1 protein, patients with SMA lose control of skeletal muscles and lose the ability to walk, eat or breathe.

Thus, Novartis argued, correcting the faulty gene with AVXS-101 could avert downstream medical costs and add 13.3 quality-adjusted life years (QALYs), justifying a cost of around $4m. But executives were just as quick to say they probably would not seek that price in the hope of ensuring all patients access. 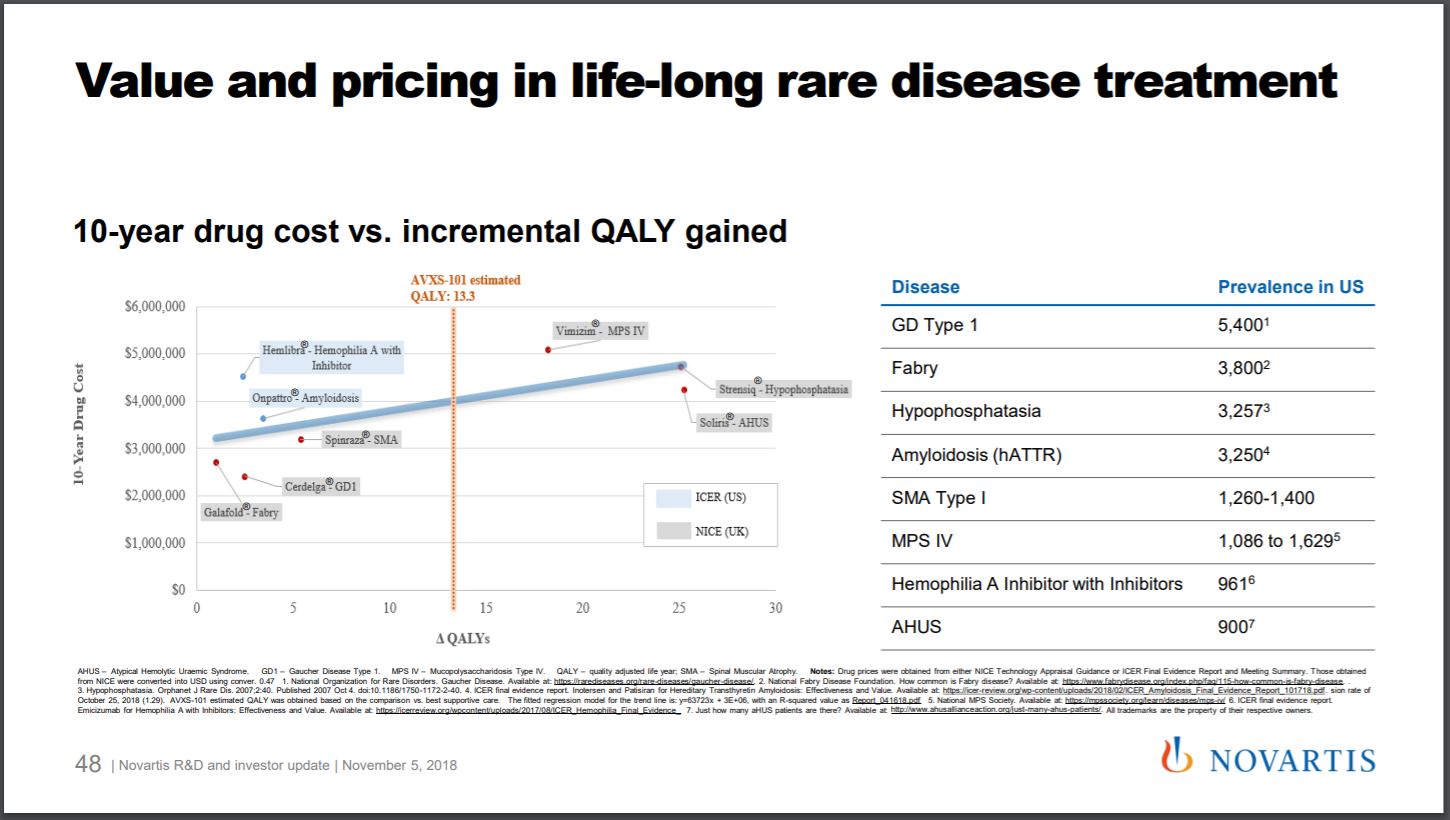 The obvious explanation for throwing the $4m figure into the discussion is as an opening proposal to payers, which would be subject to reductions by launch time. A price of greater than $1m seems plausible, however, and AVXS-101 could become the first treatment in the US to exceed that mark. So far, only one gene therapy has been approved in the US, Spark Therapeutics’ Luxturna, and that company has kept the price at $700,000 a patient.

Novartis is likely to be the second company to face a US FDA decision on a gene therapy, due in the first half of 2019. But behind AVXS-101 comes a host of gene therapies, and combined forecasts for assets in this category now stand at $16bn in 2024.

The last time Vantage looked at this space, as recently as September, the forecast stood at $13bn (Gene therapy deal-making shows no signs of stopping, September 24, 2018).

But since then Solid Biosciences’ Duchenne muscular dystrophy project has emerged as a rival to Sarepta Therapeutics’ AAVrh74.MHCK7.Micro-Dystrophin. Other projects that have begun getting the sellside's attention since then include Oncosec Medical's Tavo and Homology Medicines's HMI-102, which show up just outside the top 10 with 2024 forecasts of $371m and $362m respectively.

Expectations for gene therapy might be a bit overheated, but they come in the context of a larger migration towards orphan drugs, a trend that has been justified in part because of an abbreviated regulatory pathway and a friendlier payer stance thanks to low patient numbers. Commenting on a survey of payers, Leerink analyst Joseph Schwartz noted that 10% of prescription drug spending is on orphan indications, equating to about 1% the entire $3.7tn the US will spend on healthcare in 2018.

Put this way, it seems like a modest amount. From a different perspective, these patients constitute 2% of covered lives, and spending 1% of the nation's health care budget, $37bn, on these drugs alone – not including physician or hospital care – ought to raise some concerns.

And then there is the fact that a very small proportion of rare diseases have treatments. As biopharma R&D produces more effective treatments, including gene therapies, the share of healthcare budget they consume will only grow.

Even if million-dollar treatments are cost effective in the long term, the sector cannot deny that they will test the limits of what healthcare systems can afford. Creative reimbursement schemes will be needed to ease the pain, and pharma needs to negotiate constructively with payers to ensure access.

Tiny populations up the ante for gene therapy pricing

Should gene therapy patients be asked to pay?

Gene therapy: how much will it cost patients?