The failure of OV101 puts the spotlight on Ultragenyx and Roche.

Ovid Therapeutics has become the latest group to be punished for pushing into pivotal trials after unconvincing phase II data. And the late-stage failure of its Angelman project, OV101, has also exposed the thin pipeline in this rare genetic disease.

The other players in Angelman are taking a different approach to Ovid, which might give patients hope. But their projects are still at a very early stage and the most advanced, from Genetx Biotherapeutics and Ultragenyx, has already run into problems of its own.

Angelman syndrome affects the nervous system and causes severe physical and learning disabilities. The disorder, which affects around 60,000 people worldwide, normally becomes apparent between the ages of 6-12 months, and patients need lifelong care. There are currently no approved therapies.

The disorder is caused by loss of expression of the UBE3A gene. In people without Angelman, the paternal copy of this gene is silenced while the maternal allele is expressed; however, in Angelman patients the mother’s copy is missing or mutated.

Aside from OV101, the other Angelman projects target the UBE3A gene. The most advanced projects take aim at antisense transcript, UBE3A-AS, which usually silences the paternal allele. The idea is that this approach will release the brake on the paternal allele and lead to expression of the gene.

OV101, meanwhile, is a GABA-A agonist. Ovid’s theory was that deficient UBE3A led to decreased extrasynaptic GABA and decreased tonic inhibition in the nervous system. This then caused the brain to become “inundated with excitatory signals”, according to the company.

It had hoped that OV101 would restore tonic inhibition and address the issues seen in Angelman.

Now this theory is in tatters. The pivotal Neptune trial failed to meet its primary endpoint, change in overall score on the clinical global impression-improvement-Angelman syndrome (CGI-I-AS) scale. In fact, the numbers were very similar in the OV101 and placebo arms, with a 0.7 point improvement in the former and a 0.8 improvement in the latter.

Ovid does not seem to hold out much hope of salvaging anything from Neptune: it said it plans to analyse the full data from the study and discuss the results with the FDA to determine the next steps for the project, “if any”.

Investors looked incline to agree, with the group’s stock slumping 54% this morning.

This means the most-advanced Angelman project is now Genetx’s antisense contender GTX-102, which is partnered with Ultragenyx. However, the groups were forced to pause a phase I/II study in October after all five treated patients experienced lower extremity weakness. This was believed to be related to local inflammation caused by GTX-102, which is administered intrathecally.

In two patients, this lower extremity weakness progressed to an inability to walk or bear weight.

Nonetheless, Ultragenyx’s chief executive, Emil Kakkis, was upbeat when speaking to Evaluate Vantage in the wake of the trial pause. The intra-patient dose-escalation study evaluated four doses of GTX-102, but the adverse event only emerged with the two higher doses, he noted.

He added that clinical improvements were seen with the lower two doses. In the study the mean improvement in the CGI-I-AS scale, after 128 days, was 2.4 points. 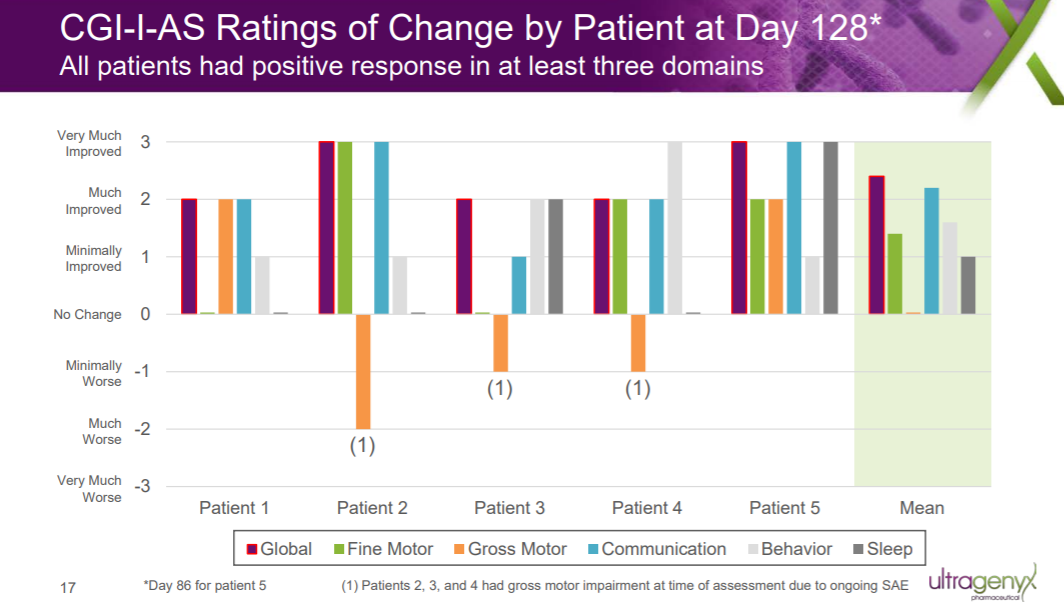 Mr Kakkis declined to give the actual dose levels for proprietary reasons, but did say the dose titration was “very steep – the range of dosing from the first dose to the top dose was 11-fold”.

“The drug was more potent than we realised – in many ways that’s a positive thing,” he concluded. He believes the problem can be solved by keeping patients on lower doses, and this is what the companies plan to do if they can restart the trial. They hope to treat another 12 patients, in addition to the five who have already been treated, Mr Kakkis said.

Ultragenyx has since noted that four of the patients with lower extremity weakness have completely recovered, while one has “near-complete resolution”. Still, regulators will no doubt be keeping an eye on safety if the study does resume.

This study has been updated to include preclinical gene therapy candidates from PTC Therapeutics and Sarepta/Stride Bio.