A very broad prostate cancer label is not the only surprising aspect of this week’s US approval for Lynparza. Close reading of the Parp inhibitor’s pivotal Profound study reveals questions around the treatment options for some control subjects – yet the product’s new label largely glosses over these concerns.

The Astrazeneca/Merck & Co drug’s approval this week was surprising mostly because it included use in some patients who had derived little or no benefit from Lynparza in Profound. The question will now be whether prescribers will be happy simply to follow Lynparza’s label as it stands.

The label allows Lynparza to be used in prostate cancer patients who have failed Xtandi or Zytiga – amounting to at best a second-line setting – as long as they carry an HRR mutation. HRR includes Brca1/2, in addition to various other mutations such as ATM, Bard1 and Chek1.

As Evaluate Vantage argued, approval in all HRR mutants was controversial: the NEJM paper discussing Profound revealed that the benefit in some non-Brca2 HRR mutants, in particular those with ATM-positive prostate cancer, was borderline or even nonexistent (Lynparza’s prostate cancer surprise, May 20, 2020).

In a statement emailed to Vantage Astra said: “Any individual gene analysis was exploratory in Profound, and comparisons may be confounded by multiple factors [including] lack of stratification or imbalances in prognostic factors. The goal is to bring the treatment to as many patients as possible who may derive benefit.”

A separate but equally pressing issue concerns Profound’s control cohort. Lynparza’s label claims that Profound subjects had to have progressed on Xtandi “or” Zytiga; they were then randomised to either Lynparza, or in the control group to physician’s choice of Xtandi or Zytiga.

The obvious concern is that there is little evidence suggesting that a patient who had failed Xtandi or Zytiga might later respond to either drug. At best it must be assumed that control subjects who had failed Xtandi then got Zytiga rather than Xtandi again (and vice-versa), though neither the NEJM nor the label spells this out.

Adding to concerns, clinicaltrials.gov says Profound actually allowed enrolment of subjects who had failed Xtandi “and/or” Zytiga. And the NEJM reveals that nearly a fifth of the control arm patients in the study had in fact already failed not just one but both drugs.

Answering the question over the rationale of enrolling these subjects to Xtandi or Zytiga in the control arm Astra said: “Profound was designed to reflect real-world clinical practice; using [Xtandi or Zytiga] as comparator represents real-world treatment sequencing. For those who failed both, options are limited.”

This might well be the case if patients had already failed on a taxane; however, in Profound prior taxane use was allowed, but it was not mandated. The NEJM paper points out that only around 65% of Profound’s enrolees had failed a taxane drug.

This left a considerable chunk who were taxane-naive, yet Profound’s control arm would not have allowed them the option of taxane, not to mention other drugs like platinum agents. Instead they would have to have got a drug that they had little chance of responding to, or had already failed.

Selected baseline characteristics in subjects enrolled into the Profound trial 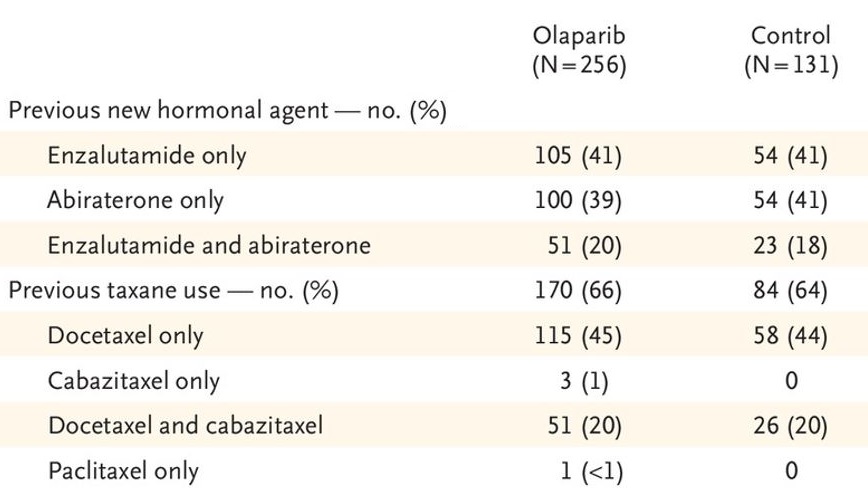 “Overall, retreatment with [Xtandi or Zytiga] or taxane after initial [Xtandi or Zytiga] failure is not ideal,” Astra said. “For some patients chemotherapy [eg, taxane or platinum] is not an option as they are not fit, or choose not to go that route.”

In a podcast that slammed Profound, Dr Prasad called the trial’s control arm “deeply, almost delinquently, inappropriate; just bad medicine. You might as well have given [control arm patients] a sugar pill, and neglected to care for them further.”

Vantage was separately emailed a statement from London’s Institute of Cancer Research, whose Professor Johann de Bono was cited as lead author of the NEJM paper. In a quote attributed to Professor de Bono Lynparza’s approval is described as “the perfect example of how understanding the genetics of a patient and their cancer can be used to target the disease’s Achilles heel and personalise treatment”.

Yesterday morning Vantage put concerns over the breadth of the approval and Profound’s control cohort to the Institute of Cancer Research, but as of the time of going to press today has yet to receive a reply.

A rare pancreatic cancer success, courtesy of a resurgent Lynparza