Back to business for biotech flotations

After a quiet first quarter demand for new issues has returned to levels seen in 2018, itself a record year for IPOs of young drug developers.

As stock markets have rebounded so has demand for fledgling drug companies. The second quarter of 2019 saw 20 biopharma flotations, EvaluatePharma data show, a reassuring bounce back after a notable slowdown at the start of the year.

In a further sign of investor interest in the sector, a look at the pricing of these IPOs shows that companies, for the most part, have been able to get the valuations that their bankers were pitching. This also represents something of a recovery from six months ago, an encouraging sign as the sector heads into the traditionally quiet summer period. 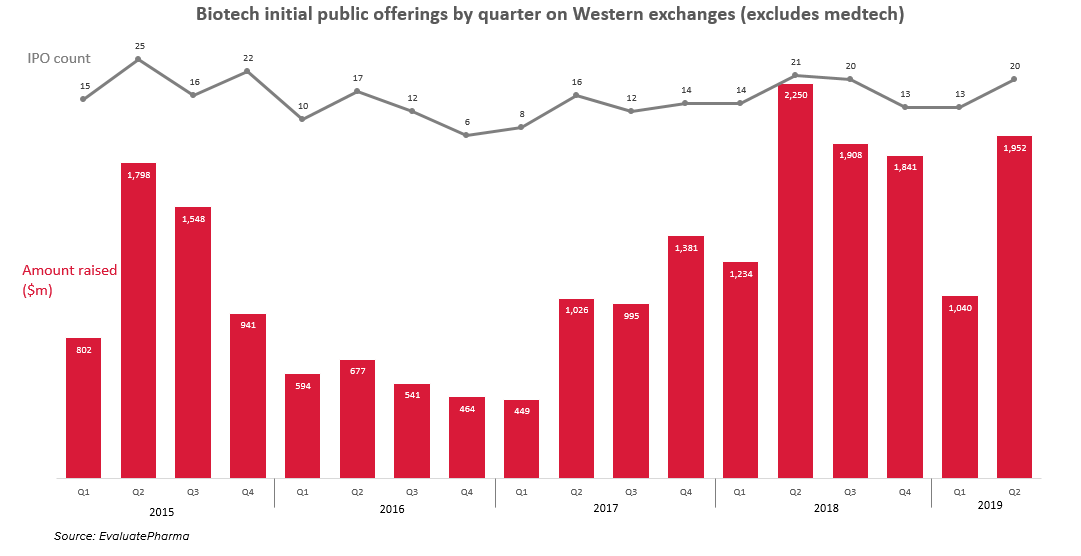 Almost $2bn was raised by these early-stage outfits in the second quarter, according to this analysis, which encompasses all first-time flotations on western exchanges of companies involved in the development of human therapeutics. It excludes pure-play medtech and genomics firms, for example, and provides a picture of investor appetite for the riskiest end of the healthcare sector.

The first-quarter dip was caused by a global equity sell-off in October, while a US government shutdown in January probably also jammed the IPO wheels for a while. In reality, though, the most recent quarter’s result is a continuation of longer-term trends. The hunt for returns in a low interest rate era has fuelled record levels of venture investment, which in turn has helped more start-ups travel towards the receptive public markets.

The analysis below looks at the average discount or premium – the difference between a company's initially proposed offer price and that at which it finally floated. This climbed back to close to zero over the past quarter, a statistic that could embolden others to seek a market listing.

Only two of the 20 second-quarter new issues floated on an exchange other than Nasdaq, indicating that the IPO scene remains a US-led story. 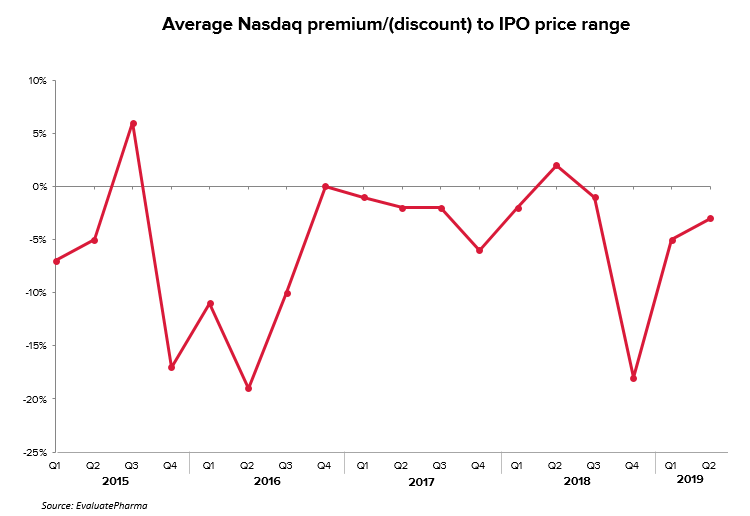 A look at the individual companies that went out in the past three months also underlines the strength of the second quarter. Seven companies raised more than $100m, led by Bridgebio’s monster $349m IPO. This puts 2019 on track to almost match last year’s record of 31 biopharma firms raising more than $100m (After a bumper year, biotech flotations remain on the cards, January 10, 2019).

Bridgebio is also notable for the reception it received: as well as selling more shares for a higher price than initially planned, the genetic disease researcher’s valuation ballooned by almost a third once its stock was trading. The company is now capitalised at $3.2bn; with three phase III projects and a broad pipeline, the California firm at least has several shots on goal.

Stoke Therapeutics, which is focused on genetic diseases, and the targeted oncology play Turning Point also carried out very well received offerings. The pressure is now on for these stocks to prove their worth, although exuberant investors should remember that the track record of IPOs is far from overwhelmingly positive (Takeover flurry aside, progress of recent biotech floats underwhelms, March 4, 2019).

Still, more established biotechs are not exactly flavour of the month, and the second quarter saw something of a pullback in the Nasdaq biotechnology index. Combined with the Independence Day holiday, the opening weeks of July could be quiet; the chart above shows that a lull normally occurs in the third quarter.

Perhaps the fledgling end of the sector is also benefiting from a loss of confidence elsewhere. If this is true, it is even more important that these new issues live up to expectations, which in some areas looks almost impossible to achieve.

Another huge quarter for biotech flotations