A run of acquisitions of recent biotech IPOs is great news for investors who backed these companies, but the reality is that a large majority of fledgling drug stocks are under water.

By the end of last week 2019 had already seen three takeouts of relatively recent biotech IPOs at substantial premiums: Loxo Oncology, Clementia and Spark. Today Nightstar joined that list. The big spike in new issues last year prompted fears about a drop in the quality of companies coming to market, so this flurry will no doubt be used by some to downplay such concerns.

Coming after last year’s buyouts of Avexis, Juno and others, the acquisitions show that investors – both private and public – often back the sorts of companies that industry wants to buy. But it should also be remembered that these headline-grabbing takeouts are the exception rather than the rule: of the 240 early-stage drug developers that floated on Nasdaq in the five years between 2014 and 2018 only 15 have been acquired for a premium, according to a Vantage analysis.

To calculate this Vantage tracked the performance of these 240 companies to February 22, 2019. The analysis encompasses only those companies developing human therapeutics, excluding medtech or diagnostics, for example, and thus provides a picture of the riskiest end of the life science sector.

Of those 240, 212 remain listed.  As for the 28 no longer afloat, 15 were bought for a premium to their IPO price, six were bought for a discount, and the remainder either became reverse merger vehicles, moved onto lower-profile exchanges or collapsed into bankruptcy.

Of the 212 that remain listed, two thirds now trade below their IPO price. Drug development is a high-stakes business, so perhaps this is an acceptable proportion. And these numbers are fluid, of course: further clinical successes and takeouts could emerge, as was seen with today’s purchase of Nightstar by Biogen, which will take the tally of premium acquisitions to 16. 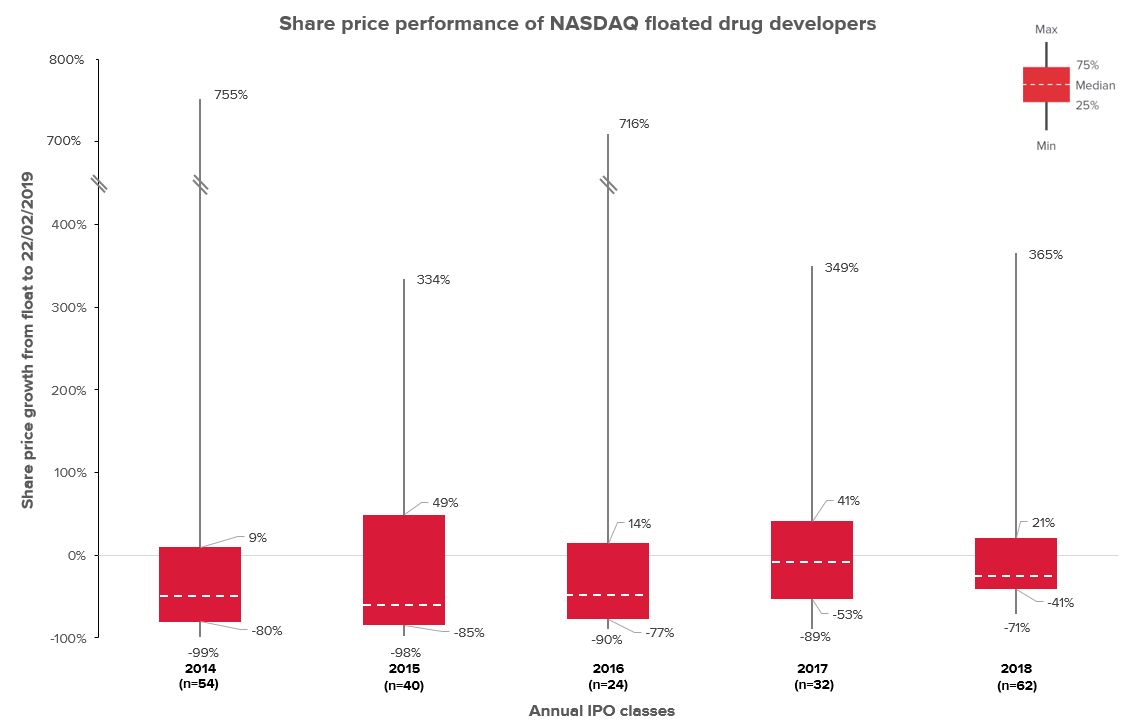 The chart above shows the share price performance of the 212 companies that remained listed on February 22. The picture here is that the median return on float price for the companies that have not been bought out is in negative territory for every year group across the period.

Given that companies tend to need time to leap or fall at crucial milestones, it is not surprising to see that performance is worse for those that floated in earlier years. However, 2018 does not seem to be heading towards a better outcome for its IPO candidates.

Again, given the expected rate of clinical failure, perhaps the pattern above should be expected. It should also be remembered that the above chart does not include those big-ticket takeout targets or the abject failures, none of which are still trading.

Another notable statistic is that the combined M&A bill for the 15 companies taken over at a premium is almost $60bn. The combined market cap of the 212 IPOs still afloat is $132bn. This demonstrates the amount of value that still remains in this class, to either be acquired or eroded.

That $60bn across only 15 companies shows how the rewards involved in these rare takeouts can be huge, as the table above also shows. But of course there is always the chance of losing pretty much everything.

Notable examples of failure to thrive include Tokai, whose attempt to target specific splice variants in prostate cancer crashed and burned, and Cerulean, which never managed to prove the potential of its nanoparticle-drug conjugates.

It is hard to know the success rate that investors who back these new issues expect. What this analysis does confirm is that picking winners in biotech is crucial, and that investing at IPO, as elsewhere in this industry, is only for the brave.