The second mega-merger in as many quarters means a huge M&A year is in the making, but a look at deal volume tells another story.

Over the first half of the year drug developers pledged to spend a total of $173bn on mergers and acquisitions, an eye-watering sum that already beats the last three full years on total deal spend. In fact, in only two of the last 10 years did the sector splash out more than this on takeovers.

The multi-billion take outs of Celgene and Allergan, for $74bn and $63bn respectively, are almost entirely responsible for the figure; the presence of a mega-merger in any year will always give a top-line boost. A look at the volume of deals happening tells a different story, however; transaction volume has been low for a while, but a big drop off seems to have happened last quarter.

EvaluatePharma counts only 22 takeovers in the second quarter, the smallest quarterly deal count for at least a decade. Having four companies distracted by two huge deals could provide something of an explanation, but this analysis does seem to point to a sluggish level of underlying M&A activity.

This analysis looks only at drug makers, and excludes medtech companies or genomics specialists, providing a focused look at the high-risk end of the sector. 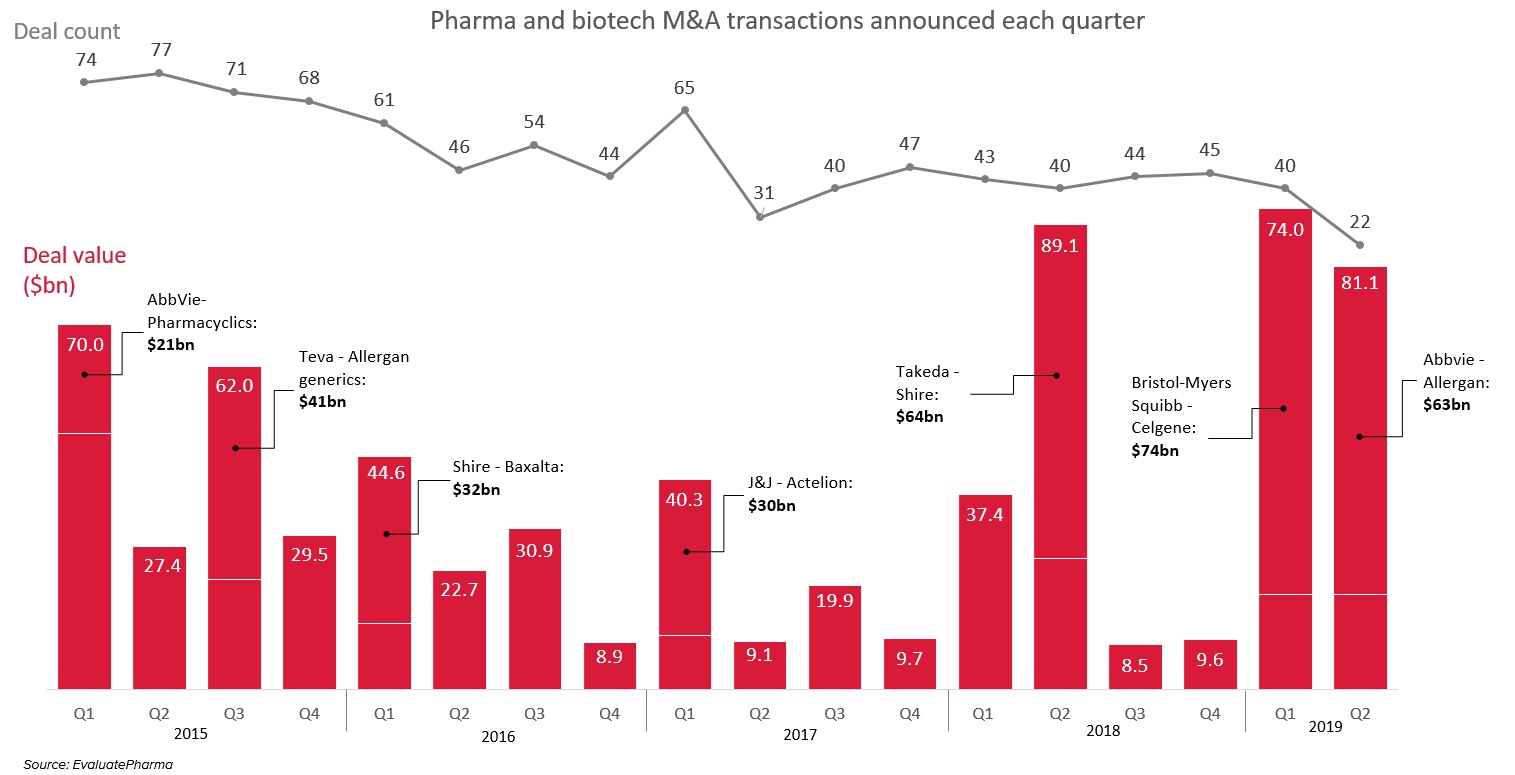 Deal bankers lucky enough to get a slice of the mega-merger action are unlikely to be concerned by the latest quarter’s slowdown, but no one will want to see this level of activity over the remainder of the year. A Vantage analysis of licensing deals, run earlier this year, also detected signs of a downturn in these types of transaction; an update on these numbers will be published in the next few days, and it will be interesting to see whether these types of transaction have also continued to slow (Licensing deal activity follows buyout market downwards, February 5, 2019).

A buoyant IPO market still exists, at least, though with signs of a retrenchment in venture funding as well – albeit from sky high levels – it seems like industry players are adopting a more cautious stance when it comes to spending.

Of course these analyses have been conducted in the shadow of the biotech boom, a period when new records were set on many measures of sector activity. A return to more normal or sustainable levels of investment and spending should be expected.

Lack of appetite for some of the sector’s more unrealistic valuations have also been blamed for the slowdown in deal making, and perhaps this factor is still at play. At the same time, however, the takeouts of companies like Array Biopharma and Loxo Oncology show that when big players want an asset, they are willing to swallow huge price tags.

But deals of this size are the exception rather than the rule. It is the smaller deals that tend to drive the volume of M&A activity in any given year, so a slow down at this end of the transaction scale must be responsible. An important factor to consider here is the willingness of equity and venture investors to fund young drug developers, which can lessen the need to make a deal.

All of this spells sparse times for deal bankers. These analyses suggest that recently their ideas have for the most part been falling on unappreciative ears. As long as clients have alternative financing options on the table, pitches must be backed by water-tight logic.

A big finish confirms 2019 as a takeover year to remember