The number of biopharma buyouts overall last year did not rise, though more deals were struck in the “sweet spot”, and premiums saw a healthy rise.

The development end of the biopharma sector is notoriously risky, and a strong flow of deal making is crucial to keep investors interested. But what does a “good” year for M&A actually look like, in terms of the numbers involved?

2019 was widely judged to be a strong year, and the huge sum committed – $217.2bn on all types of M&A deal across the year – certainly stands out. But this topline number was boosted by two mega mergers and is far from the end of the story, saying nothing about underlying transaction volumes, or the prices being paid.

To paint a more detailed picture Vantage has crunched EvaluatePharma’s M&A data to examine how 2019 differed from the preceding few years. The synopsis: the amount of straight company takeouts happening has remained largely flat over the past three years, though mid-size deals rebounded in 2019, to the highest level since 2015. Meanwhile, premiums climbed to the highest point since at least 2015, with research-stage companies commanding particularly high prices.

This analysis focuses only on the activities of companies that develop or sell drugs, and excludes medtech or diagnostic groups and CROs, for example.

First to the distribution of deals by price paid. What is immediately noticeable is that takeovers remain well below the volumes of 2015, when the biotech boom prompted something of a deal-making frenzy. A drop-off was inevitable from these artificially high levels, but a dearth of medium-sized deals that are particularly beloved by investors has been a cause for concern.

A flurry towards the end of 2019 has put worries to bed for now, though many will hope that the pace of deals continues to pick up this year – or at least not fall back again. The table above shows how deals in the $1-15bn range have rebounded over the past couple of years; big pharma’s “sweet spot” will fall somewhere into here, although the ideal bolt-on price will differ between companies.

It is interesting that the volume of sub-$500m takeouts has dipped somewhat, a trend that could be explained by climbing valuations in the private sphere. Larger $15bn+ deals will always be few and far between, at whatever stage of the cycle the sector sits.

This all suggests that it is the volume of mid-stage deals that helps set opinions about the “quality” of an M&A year. The image below plots the frequency of takeovers struck for between $500m and $15bn, and the most striking observation is that the dispersion of deals between years does not look substantially different. 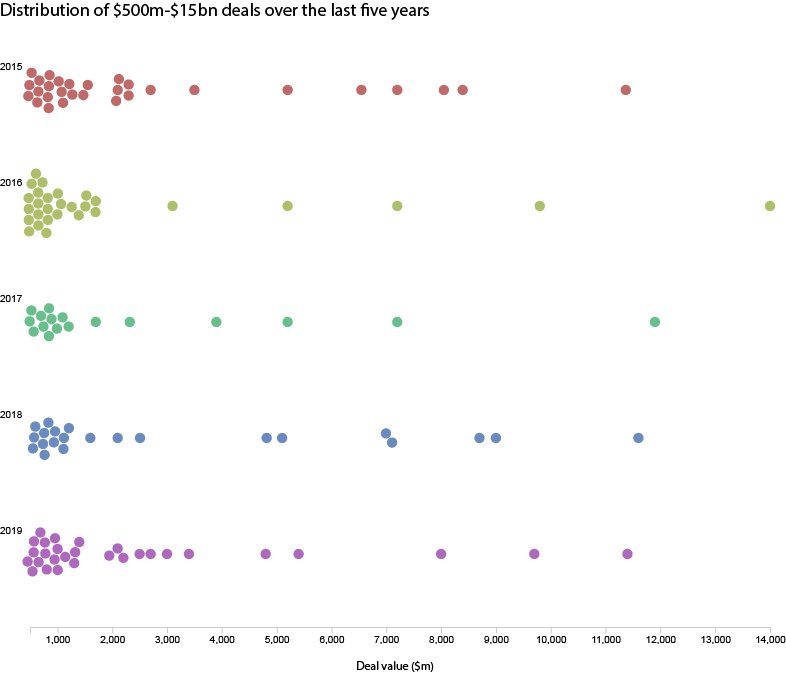 True, 2019 did contain a healthy number of sub-$3bn deals, but the year was certainly not marked by a higher frequency of takeovers at the larger end of the tail. Apparently, it does not take much of an uptick in deal making for investors to sit up and take notice.

Still, counting the number of takeovers is a simplistic measure, while the frequency of transactions in particular brackets will be influenced by valuations at that point in time. Looking at premiums provides a different way to compare activity across years, as it describes the lengths to which buyers must go to get deals done.

Premiums can also be seen as a proxy for the level of competition for assets, and a look at the analyses below suggests that last year acquirers were fighting over these deals. The median takeout premium for a research-stage drug developer reached 97% in 2019, the highest level for at least five years.

This figure can be explained by the reality on the ground: high innovation and cutting-edge technologies are back in fashion for big pharma, which would prefer to buy in these sorts of assets – assets that are in turn relatively scarce. There are also numerous motivated buyers among lower tiers of the biopharma sector.

This analysis naturally only includes listed companies, and again a look at the volume of these deals also helps to explain why 2019 was considered so strong. That 97% median premium was derived from 28 transactions, almost double the number of research-stage buyouts that happened in 2015.

The biotech boom of 2015 might have seen a huge volume of deals done, but investors will be much happier with the premiums that were extracted last year. More deals in the sweet spot and at higher premiums – no wonder 2019 was considered a successful M&A year.