Up-front fees paid out by biopharma companies to seal licensing deals noticeably dipped in the second quarter of the year – then Gilead and Galapagos came along.

This is a corrected version of an article that ran on July 16. Previously published numbers should be ignored.

The $4bn that Gilead has agreed to pay Galapagos, effectively to access the Belgian company’s entire pipeline, is without doubt one of the largest licensing deals that the biopharma sector has seen. True, the scope and terms of these transactions vary greatly, but examples of up-front fees in this ballpark are few and far between.

The deal is also notable because the initial payment exceeds the total sum of all up-fronts paid out in biopharma licensing deals over the first half of 2019. A Vantage analysis of EvaluatePharma data shows that the year was shaping up to be pretty slow for these types of transactions, echoing a similar slowdown that has been seen in the M&A market (Biopharma set for a big buyout year – on dollar terms at least, July 9, 2019).

The first quarter of 2019 saw 26 licensing deals with up-front fees worth $2.8bn disclosed; this is a pretty low number of deals by recent standards, as the graph below shows, although this is somewhat masked by the huge $1.4bn up front that Astrazeneca paid to access Daiichi Sankyo's antibody-drug conjugate, trastuzumab deruxtecan. The second quarter then saw a further slump in activity, and the lowest up-front total in at least five years. 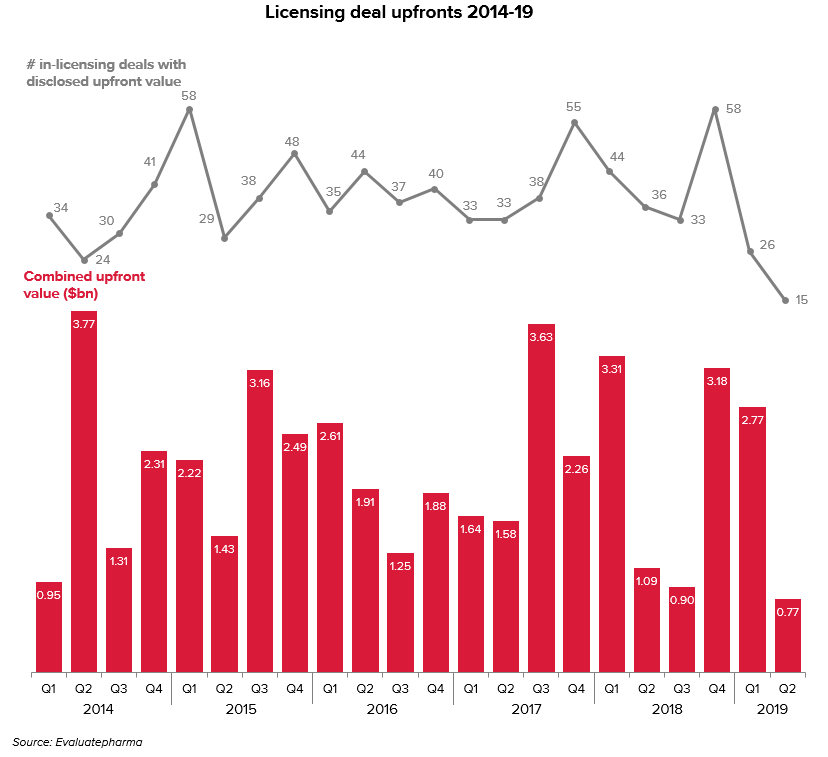 This analysis looks only at transactions where an up-front fee was disclosed, so will understate the sector’s total licensing deal activity. The trends overall will be largely similar, however. By including only up-front fees and ignoring the headline-grabbing "biodollar" values, which will almost never be paid out in full, these numbers arguably paint a more accurate picture of biopharma’s spending on these sorts of moves.

There is probably no single explanation for the big drop seen in the second quarter, and it is true that quarter-by-quarter the numbers do fluctuate wildly. But several executive teams at some big deal-makers would have been preoccupied, for sure: the Bristol-Myers Squelgene and Abbvergan mega-mergers were being hatched late last year, while a few other companies were negotiating large transactions – Pfizer and Array, and Gilead and Galapagos, for example.

It is also true that, with the capital markets receptive, smaller companies have several financing options on the table, though this has been true for some years now. Unpalatable valuations, which are said still to be a problem in some fields, could also be acting as a drag on deal-making.

It remains to be seen whether a slow period really is developing; the graph below shows that when these numbers are annualised the figures become pretty consistent. The $4bn that Galapagos will bank in the third quarter will give 2019's total a huge boost, and take the tally closer to what has typically be seen in the last few years. However on transaction volume, it does look as though this year could see a downturn. 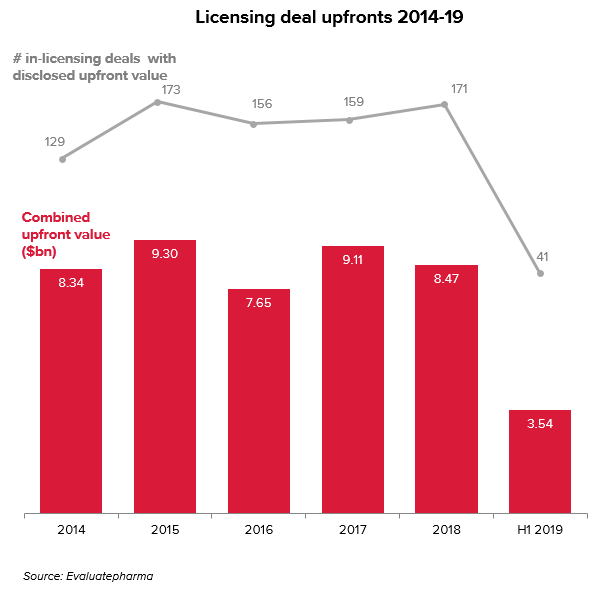 The table below shows just how substantial Gilead-Galapagos is alongside other big deals. True, this particular transaction covered several products, while the likes of the Astrazeneca-Daiichi and Bristol-Myers Squibb-Nektar tie-ups concerned single assets.

What is less clear is whether big bucks equal big success. The jury is still out on the Daiichi antibody-drug conjugate, while hopes are fading for NKTR-214. The heart failure collaboration with Bayer has probably not delivered quite what Merck & Co hoped, though the latter certainly scored a more successful asset with its deal with Astrazeneca; what the UK pharma giant hoped to get from that transaction is less clear.

It will take some time to measure the value of the Gilead-Galapagos deal, though the US biotech is presumably hoping for more than one hit for this size of outlay (Through Gilead, Galapagos secures an independent future, July 15, 2019).

If you want blockbuster sales, buy them in

The sellside’s mid-term forecast: sunny with few hints of rain