If you want blockbuster sales, buy them in

An analysis of recent US drug sales confirms the growing role of licensing and acquisitions, though the biggest sellers conceal some interesting nuance.

Periodic blips in sector trends notwithstanding, business development continues to drive biopharma. And an EvaluatePharma analysis of US revenue numbers suggests that the industry is becoming more, not less, reliant on drugs that had been bought or licensed in.

The question for deal bankers is whether this trend is set to continue. Already it is clear that, purely in terms of absolute approval numbers, the reverse has been true: only 55% of new molecular entities greenlit in the US last year were sourced externally, versus 74% of the 2009 total.

Of course, this apparent disparity might simply reflect two things. Firstly, only the biggest-selling drugs are being picked up in licensing deals or M&A, resulting increasingly in those assets that remain in house generating a relatively insignificant share of the sales total.

Secondly, who is to say that all of the 2018 approvals of organic origin will still be in house a few years down the line? And, if the first point is true then it would be logical to expect the most promising approvals of recent years to lead to deals and buyouts, thus contributing to total sales being increasingly made up of externally sourced products. 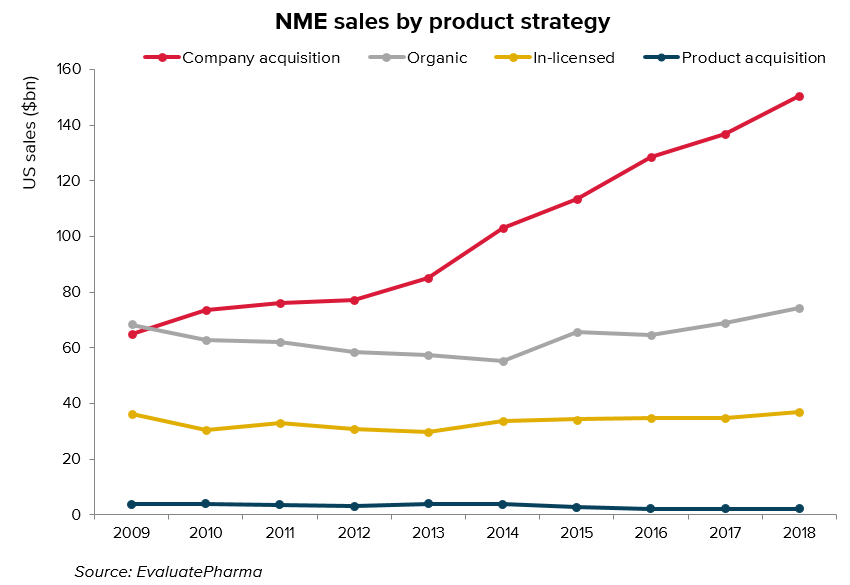 Overall the message is that deals are driving an ever-greater share of biopharma sales. But there is some nuance in the numbers; for instance, over this 10-year period the share of sales from assets that had been licensed in has stayed pretty flat, but the overall positive trend was driven by a surge in sales of drugs that had come in through company acquisitions.

The most important among these will cause few surprises. After all, both the current and likely future biggest-selling drugs – Abbvie’s Humira and Merck & Co’s Keytruda – were sourced externally, and together accounted for a massive $21.1bn of 2018 US sales.

Moreover, several of Roche’s big sellers, including Herceptin, Avastin and Rituxan, came via Genentech, which the Swiss firm did not acquire fully until 2009, so technically these too are classified as externally sourced. Such powerhouses make 2018’s biggest-selling in-house drugs, like Celgene’s Revlimid and Bayer’s Xarelto, seem relatively insignificant.

What might the future bring? More of the same, it seems, as Keytruda looks set to take over the number-one US sales spot overall with $16.8bn in 2024, and lead the charge of externally sourced drugs along with the likes of J&J/Abbvie’s Imbruvica, and Roche’s Ocrevus and Hemlibra.

There are some notable new organically sourced contributors to the 2024 numbers, such as Astrazeneca’s Tagrisso, Gilead’s Biktarvy and Vertex’s cystic fibrosis combinations, and remarkably Revlimid remains the top 2024 seller of this category.

By then, however, Celgene will have been bought by Bristol-Myers Squibb, and the drug will no longer count as having been sourced organically. 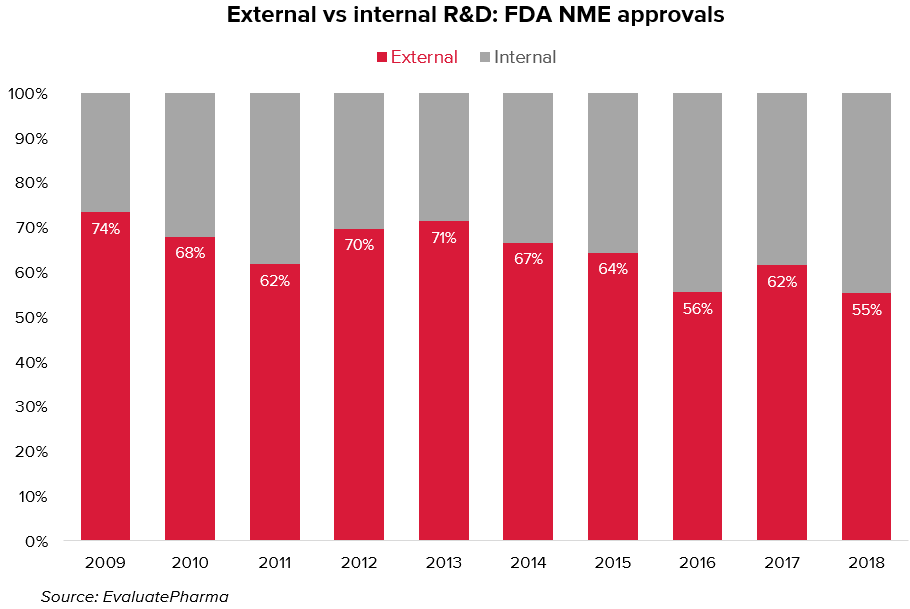