Schemes like US priority review and breakthrough therapy designation aim ultimately to cut approval times, and speed to market has also been improved in recent years by efforts to reduce the FDA’s backlog. But how long does it typically take before a novel mechanism of action sees its second market entrant?

That largely depends on what disease area is being considered, and how hot it is perceived to be. An analysis of EvaluatePharma data suggests that in general second-in-class drugs are emerging with increasing speed, though of course being a fast follower does not in itself guarantee success (see charts below).

This can perhaps best be seen in hepatitis C antivirals, where the first-to-market race between the protease inhibitors Victrelis and Incivek was rendered meaningless by Gilead’s subsequent launch of the polymerase inhibitor Sovaldi.

Still, it cannot be denied that antivirals and oncology are two therapy areas where me-too drugs have followed first-in-class launches with increasing speed. This is surely down to the perception that there is enough potential revenue here for more than one product to play for. 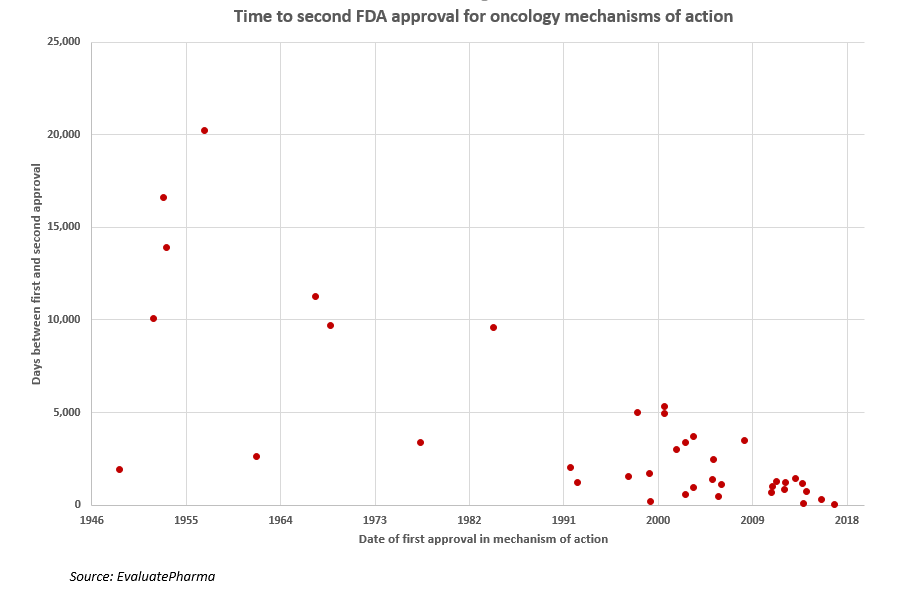 Two recent oncology examples are the checkpoint inhibitors and CAR-T therapy. It was just 16 weeks before the anti-PD-1 MAb Keytruda had a direct competitor in the form of Opdivo, and within three years there were two PD-L1-directed drugs on the US market, too. And just seven weeks separate the US approvals of Kymriah and Yescarta – albeit in different haematology uses for now.

Interestingly, Keytruda and Opdivo’s fortunes have waxed and waned: the Bristol drug swiftly took away Merck’s first-mover advantage, but more recently Keytruda has regained the upper hand, thanks to its dominance in first-line lung cancer.

An even more obvious race to market occurred recently outside oncology, concerning the PCSK9 MAbs Praluent and Repatha, with the former winning by five weeks thanks to a priority review voucher; but it is Repatha that analysts ultimately expect to be the long-term victor in sales terms.

This analysis has been done using EvaluatePharma’s broad pharmacology classifications, and compares the US approval dates of the first two drugs in each class to reach the market. Not all the data match neatly defined trends.

For instance, oncology is lucrative, but the blockbusters Velcade, Avastin and Rituxan did not see me-too competition for nine, 10 and 12 years respectively. While the first is expected soon to be overtaken by Kyprolis in terms of sales, the last two have proved safe from Cyramza and Arzerra's challenges – thanks basically to being better drugs.

In the middle of the pack lie such strategies as Parp, EGFR and BTK inhibition. Imbruvica’s four-year period as the sole BTK inhibitor has given it time to establish a virtually unshakable position, but in EGFR it is a franchise story, with Astrazeneca fighting off Tarceva’s threat to its first-mover, Iressa, through the follow-on launch of the highly successful Tagrisso.

The sellside in time expects Tagrisso sales to outstrip those of Tarceva and Iressa combined, so it is clear that first to market only sometimes means best to market.