Venture capital firms invested a record $16.8bn in private drug developers globally in 2018, but signs of a cooling are clear.

Anyone with even a half an eye on the venture capital industry should be aware that 2018 was a spectacular year. Driven by an explosion in huge funding rounds, private drug developers raised almost $17bn globally even as the number of financings dropped to the lowest for a decade.

The sum raised smashed 2017’s previous record by an impressive 39%; the venture world saw unprecedented investment activity across all sectors last year, and biopharma was no exception. Still, many assume that 2018 will not be repeated – the second quarter of the year looks to have been the peak – meaning the extent of any slowdown remains a big question for 2019.

This analysis of EvaluatePharma data includes only those companies involved in developing human therapeutics – the highest-risk end of biotech venture investing – and excludes subsectors like medtech or genomics.

This does not mean that investments are liable to fall off a cliff. Venture funds are still very well stocked and able to raise new capital and the IPO window is open, for now at least, which bodes well for exits. Also, these record figures were achieved while the M&A market was relatively quiet, which should have been a headwind for venture firms.

However a return to levels seen in 2015 and 2016, years that were still pretty respectable historically speaking, is not unimaginable. This is partly because the funding peak of late-2017/early 2018 was surely never sustainable.

Meanwhile the drop in equity markets in October prompted fears that the global bull run – a long-running period of climbing share prices – was running out of steam. This looks to have already persuaded investors to adopt a more prudent stance.

Figures for the first quarter of 2019 will be watched with interest, to see which way the venture winds are now blowing. 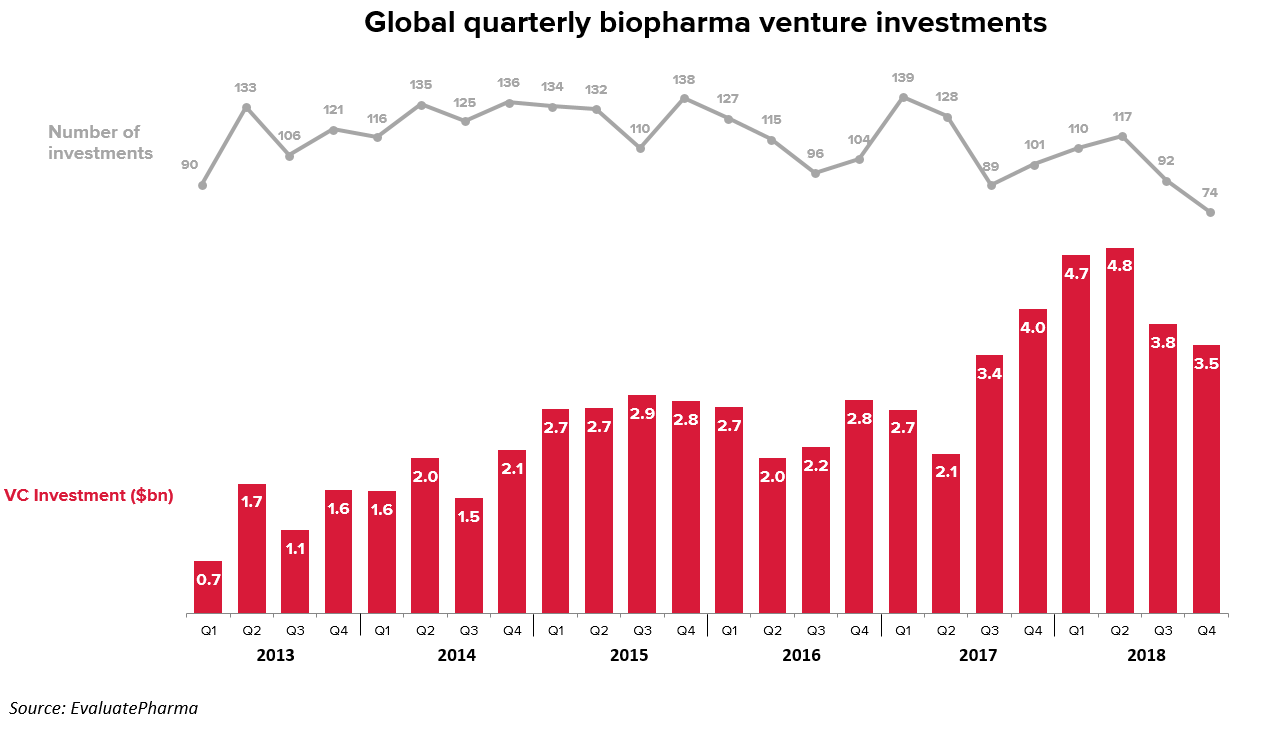 The huge $400m that Relay Therapeutics managed to secure in late December shows that there is still plenty of dry powder out there. The platform company, which claims to drive its drug discovery with “unprecedented computational power”, provides a classic example of the mega-rounds that have helped drive the top-line numbers so high.

Lead by Softbank, itself more traditionally focused on tech companies, the monster series C attracted a broad range of investor types who presumably hope to dramatically accelerate progress at the company with a big cash injection. That the round only ranked as the third largest biopharma investment last year attests to how commonplace these mega-rounds are becoming.

This analysis shows that 37 drug developers raised more than $100m last year, more than double the number doing so in 2017. With ever fewer companies sucking up ever larger proportions of investment capital, the quality of the science emerging from these start-ups is another big unknown for 2019.

The real answer to this will take much longer to emerge, of course. Meanwhile, the decline in Moderna’s share price since it has been in public hands shows that not all investors share some of the stratospheric private sector valuations that have been achieved recently.

Many believe that over-availability of capital can have a detrimental impact on the quality of investments. Perhaps a return to something that looks more like normal in 2019 should be welcomed.

Another strong quarter from the venture world

The cash register rings for Biontech and ADC Therapeutics