Biotech venture financing starts the year with a bang

With a record $7.1bn raised in the first quarter the cash available to private drug developers shows no signs of drying up.

Sharp declines in US biotech stock indices gave equity investors a nervous start to the year, but life has been much more comfortable for backers of private companies. Young drug developers raised $7.1bn in venture cash in the opening months of 2021, a sum that smashes previous records by a considerable margin.

A handful of monster rounds helped drive the topline number higher with two companies, Elevatebio and EQRx, accounting for more than $1bn of the cash raised. The quarter also saw a dramatic acceleration in the concentration of capital into fewer but better-funded start-ups; while the number of financings fell to at least a five-year low, both the mean and median amounts surged to new highs.

This focusing of funds is not a new trend, but the chart below shows just how dramatic the swing has been this year. The mean amount raised per round reached $84.4m in the first quarter, more than double that seen in the same period in 2020, while the median more than tripled.

The below analyses are based on Evaluate Pharma’s venture financing data, with a specific focus on drug developers. Money raised by companies working in associated fields like medical devices, diagnostics or pharmaceutical services has been excluded, to help identify trends specific to those developing human therapeutics. 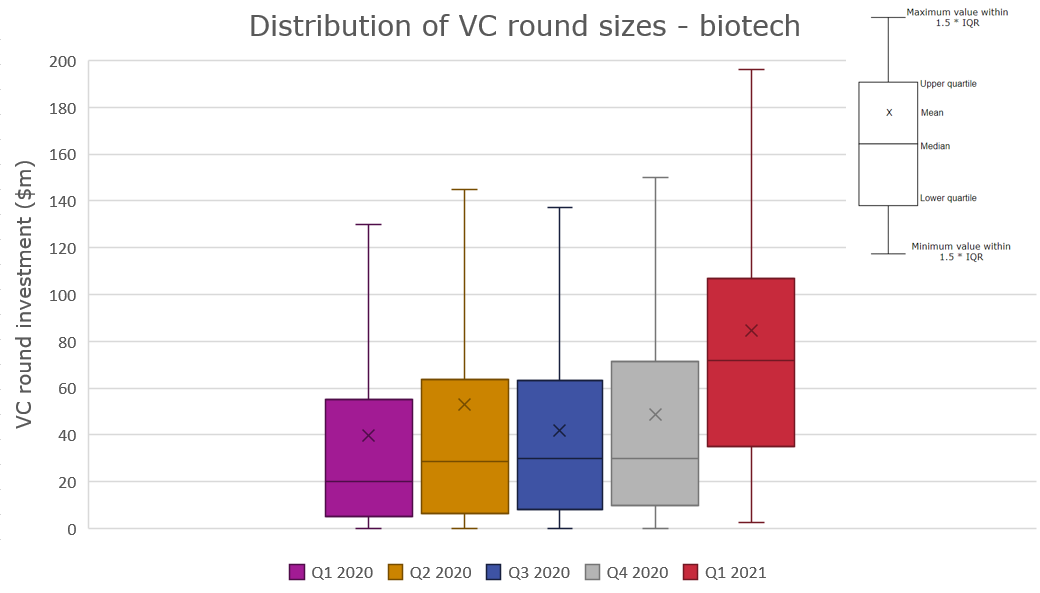 The second quarter of 2020 held the previous record in terms of cash raised, but that $4.4bn total has now been beaten by almost $3bn. Even without the Elevatebio and EQRx mega-rounds the first quarter would have been a record breaker, and it is clear that the sums are about more than a couple of outliers.

A big factor is the Covid-19 pandemic, the driving force that pushed the life science venture sector to new highs last year. Success with vaccines helped persuade investors to plough cash into venture funds, which promised access to exciting new biotech opportunities. That cash is being deployed with gusto.

One cloud on the horizon is the risk that the retreat in biopharma shares since February could turn into something more pernicious, threatening support for IPOs. The amassing of huge pre-flotation fund raisings, known as crossover rounds, is another reason behind the rising sums; any closing of the IPO window will show up in these numbers in the future.

The first quarter could well set another record: that of the lowest amount of individual financings. The numbers have to be run back at least 10 years to get close to the 92 counted by Evaluate Pharma; 94 were recorded in the first quarter of 2013, for example.

True, these data are fresh, and backfilling could mean that the first-quarter tally edges higher. But the uplift is unlikely to be significant, and it seems that a “winner takes all” situation is becoming ever more marked in the private drug development space.

If this means better returns for investors and improved R&D productivity, then this does not matter. But it will take years before those sorts of conclusions can be drawn. And in the meantime, while the cash continues to flow, venture investors will keep spending.

Europe’s venture boom trails the US

Corporate investing plays an ever bigger role in medtech