If big medtechs are becoming more demanding when evaluating potential takeout targets, the same is true of investors. For the first time, the number of venture funding rounds closed in a year has dropped beneath 200.

The 196 VC deals done in 2018 is, it goes without saying, the lowest number for more than a decade. The amount raised in total, though, is holding fairly steady: at $5.7bn it is higher than ever before with the exception of 2017’s total. Given Verily’s $1bn investment round last week – the first one-shot billion-dollar deal closed by a private medtech – it appears that the coming year might also leave 2018 in the dust.

This analysis covers only companies developing products for clinical application – either diagnosing or treating human disease. 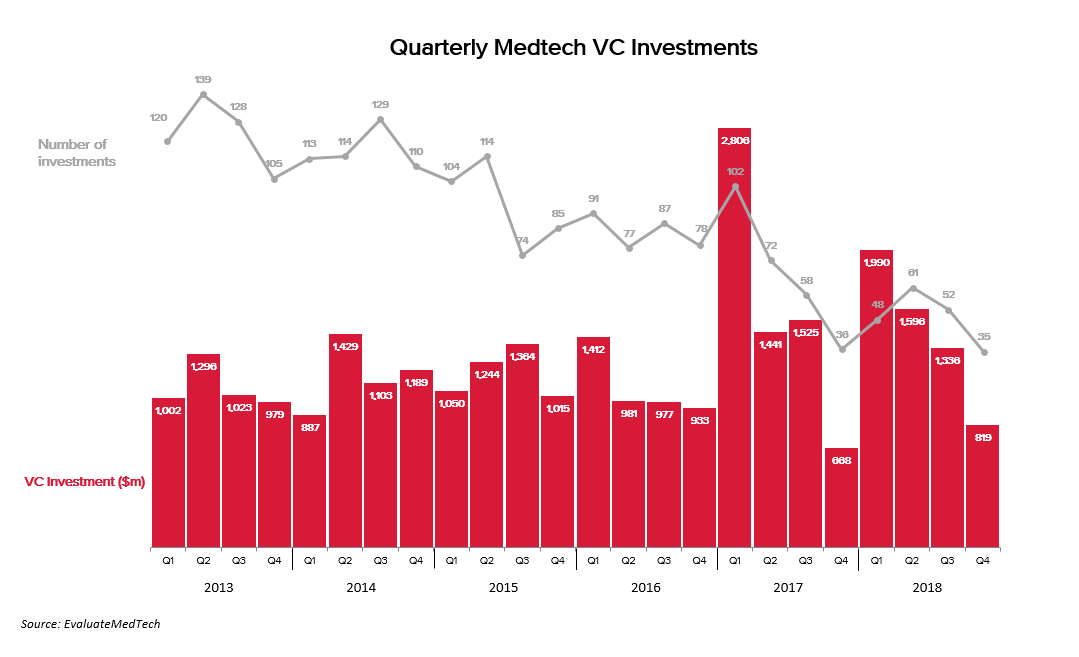 This is not to say that 2018 was a washout. But it is obvious that traditional medical devices are not appealing to investors in the same way as previously. Of the top 10 rounds raised in 2018 all but two went to groups developing diagnostics – either DNA sequencing-based in vitro tests or novel imaging technologies.

Grail leads the charge, with a second tranche of its series B worth $315m and a $300m series C taking the first and second places. Helix is a consumer genetics company, selling products including a $160 test resulting from a collaboration with the Mayo Clinic, designed to allow healthy individuals insight into health and disease risks and mutations associated with hereditary genetic conditions.

Oxford Nanopore’s $140m round in March underscored its unicorn status, and was followed by a $66m equity investment by Amgen in October. But the group is expected to take orders worth just $75m in 2018, and its plans to disrupt the sequencing market will take some doing (Oxford Nanopore, the disruptive unicorn gunning for Illumina, April 9, 2018).

Sequencing technologies are popular with venture investors because they are relatively cheap to develop and are often lightly regulated; meanwhile advances in machine learning mean that data can be sifted rapidly to provide meaningful, usable results. Roche’s $2.4bn takeover of one such group, Foundation Medicine, will not have been lost on VCs either.

And these groups are immensely popular as takeover targets. Philips alone has bought 10 companies specialising in imaging, informatics and other software since mid-2016, and GE Healthcare bought Nvidia for similar technology (The new league of imaging companies remaking the market, August 29, 2018). Imaging technologies have also been popular investment targets. This sector has moved rapidly in recent years from a fairly staid area where the most that could be hoped for was incremental improvements to established imaging machines to more mobile, advanced and combined technologies, again boosted by artificial intelligence.

The paucity of VC deals this year has pushed the average size of a medtech funding round to nearly $30m. Verily’s monster round means the chances of this average figure decreasing in 2019 are approximately nil. The chances of traditional device makers displacing data-driven diagnostics companies in terms of appeal to VCs are probably about the same. 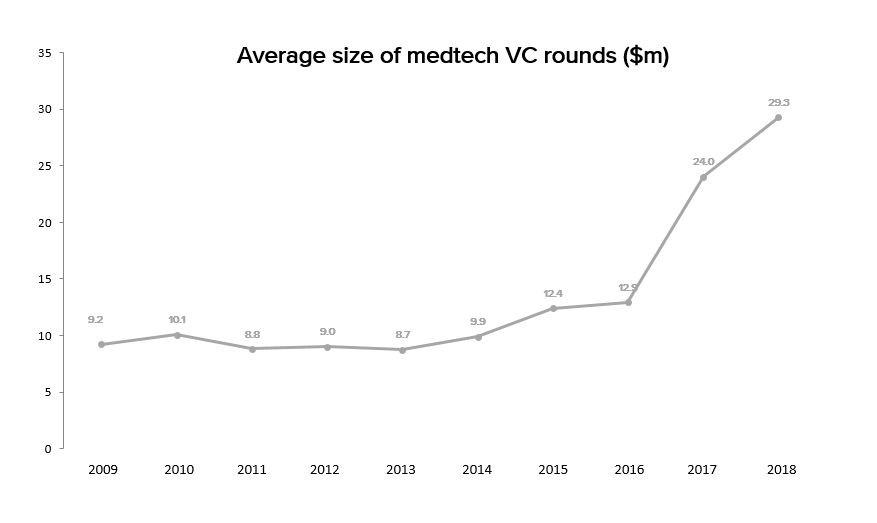