Three years ago Fate Therapeutics did not even have an IND to its name, but today has four clinical NK cell assets and one clinical Car-T therapy, plus a $9bn market cap to boot. However, clinical backing for its approach has been limited so far, making the upcoming revelation of the first significant clinical dataset for FT596 especially important.

The asset is an anti-CD19 Car-NK cell therapy with three genetic modifications, and represents the third stage of Fate’s stepwise approach to making its name in this space. However, once FT596 went into the clinic its lymphoma trial has progressed slowly, heightening concerns over what has been baked into Fate’s valuation.

A presentation at Ash 2019, highlighted at the meeting’s press programme, ended up disclosing nothing beyond preclinical data, while last year’s Ash, a conference at which several NK therapy players’ stock soared, featured just one case report of a patient given FT596.

All is set to change when Fate details response data from the first three dose cohorts of a phase 1 trial at an investor event on August 19.

Anti-CD19 projects are plentiful in the autologous Car-T space, but a key advantage of NK therapies is that these are allogeneic. Thus investors’ baseline expectation is that Fate’s study must show efficacy on a par with autologous Car-T, which in lymphoma has yielded overall remission rates between 50% for Kymriah and 73% for Yescarta and Breyanzi.

Another marker in the sand is a separate study run by MD Anderson’s Dr Kathy Rezvani testing cord blood-derived anti-CD19 Car-NK cells, which represents one of the few other clinical Car-NK therapy datasets. Though this is not perfectly comparable it showed 73% ORR among just eight lymphoma subjects, with “no cytokine release syndrome or neurotoxicity”.

As for allogeneic competition, at Asco Allogene’s CD19-targeting Car-T project ALLO-501 yielded a 75% ORR in 32 lymphoma patients, though a relatively high number of relapses within six months prompted a negative market reaction. Retreatment – much easier with an allogeneic than with an autologous therapy – rescued some of the relapses, however.

Indeed, perhaps the most significant aspect of the FT596 case report detailed at last year’s Ash was that the diffuse large B-cell lymphoma patient had been retreated. She had earlier failed seven therapy lines, though she had responded to four of these, and FT596 at the lowest dose elicited a partial remission; this was said to deepen after a second dose. 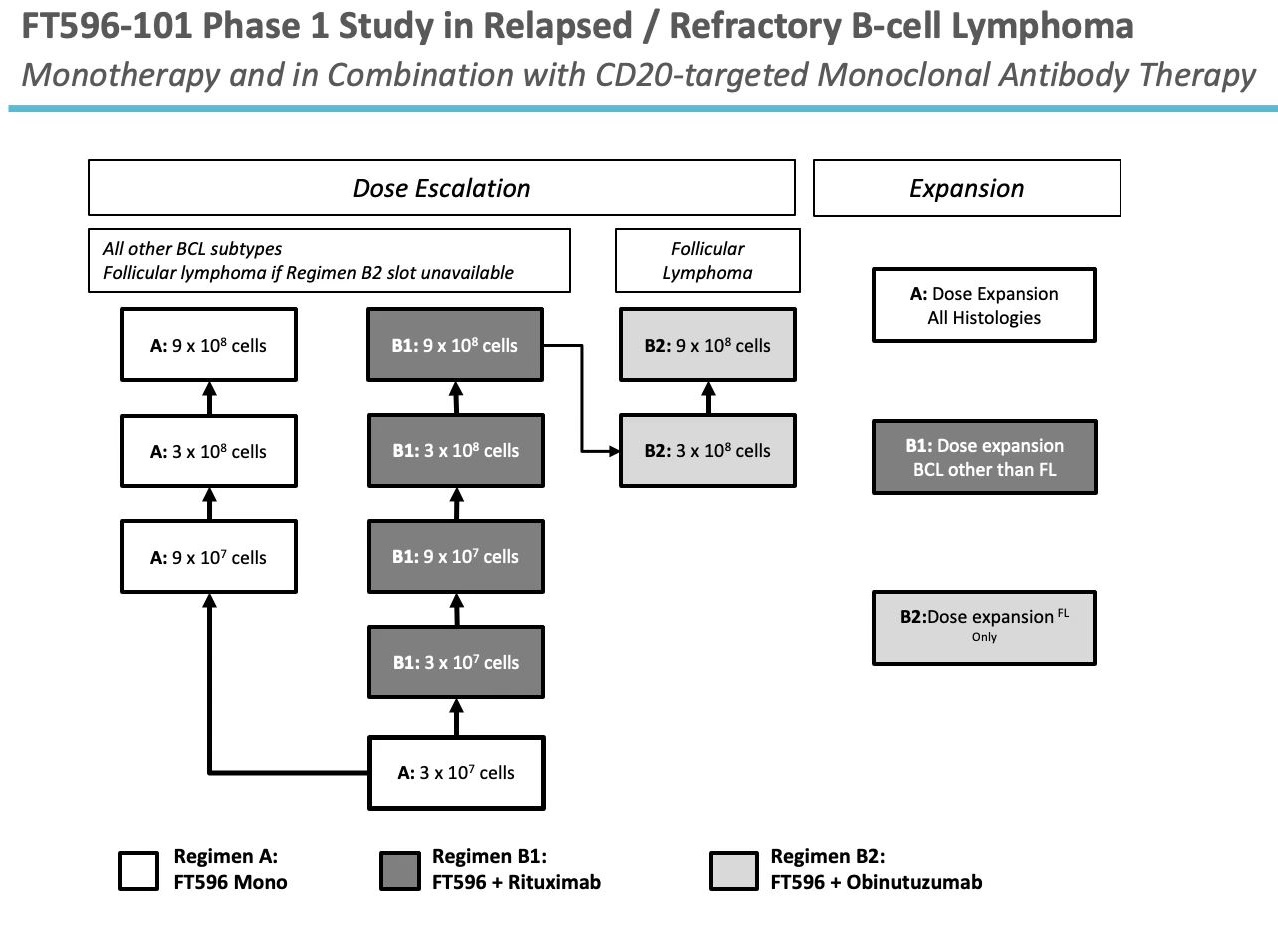 It is not clear whether Fate will disclose anything about combinations, but if it does it might be difficult to split out any effect due to the anti-CD20 antibodies. Thus investors are likely to focus on monotherapy data. Given Allogene’s experience with allogeneic Car-T, investors will want to see how durable responses are, in addition to pure efficacy.

Stifel analysts say that if disclosed response rates are below that of Car-T then such activity must at least “seem achievable” with the remaining highest dose, which is now enrolling. Expect Fate’s bloated valuation to take a hit should this minimum expectation not be met.