But it is still unclear how much of a threat Onpattro will be to Pfizer’s Vyndaqel.

When Alnylam toplined the long-awaited Apollo-B study of Onpattro as positive last month, investors hoped that full data would answer outstanding questions about the therapy’s prospects in amyloidosis cardiomyopathy.

However, things still look pretty murky. Bears will point to an apparently less impressive effect on six-minute walk test (6MWT) than the incumbent, Pfizer’s Vyndaqel. Alnylam bulls will note that big differences between the trials of the respective agents make them almost impossible to compare.

At the International Symposium on Amyloidosis today, Alnylam said Onpattro had shown a 14.7m improvement over placebo on 6MWT.

Whether this is clinically meaningful is the big question. It also falls short of the 30m delta between Vyndaqel and placebo in that drug’s pivotal trial, Attr-act.

Still, things have changed a lot since the Attr-act study – not least Vyndaqel’s approval. Around 25% of patients in Apollo-B were on the Pfizer drug, and the Alnylam trial also excluded the sickest patients. All this could help explain the lower overall decline in 6MWT in Apollo-B versus Attr-act.

Some of the confusion could have been cleared up if Alnylam had disclosed Onpattro’s performance versus Vyndaqel alone in Apollo-B – something the company did not do.

Results from a subgroup analysis looking at patients receiving/not receiving Vyndaqel are due at the Heart Failure Society of America meeting next month, along with a subgroup analysis of wild-type versus hereditary patients, Alnylam execs said during a conference call today.

Another black mark against Onpattro is that, as previously disclosed, it did not show an impact on a composite of all-cause death, cardiovascular events and change from baseline in 6MWT – whereas Pfizer’s drug has been shown to reduce hospitalisations and deaths.

Alnylam’s president, Akshay Vaishnaw, insisted that Apollo-B had never been powered to show such a difference. “This study was, from the off, designed in conjunction with the FDA, and they guided us that the quickest way to get approval was to do a 6MWT,” he told Evaluate Vantage.

However, an analysis of all-cause hospitalisations, urgent heart failure visits and deaths rang alarm bells, showing that, intially, patients did numerically better on placebo than on Onpattro. 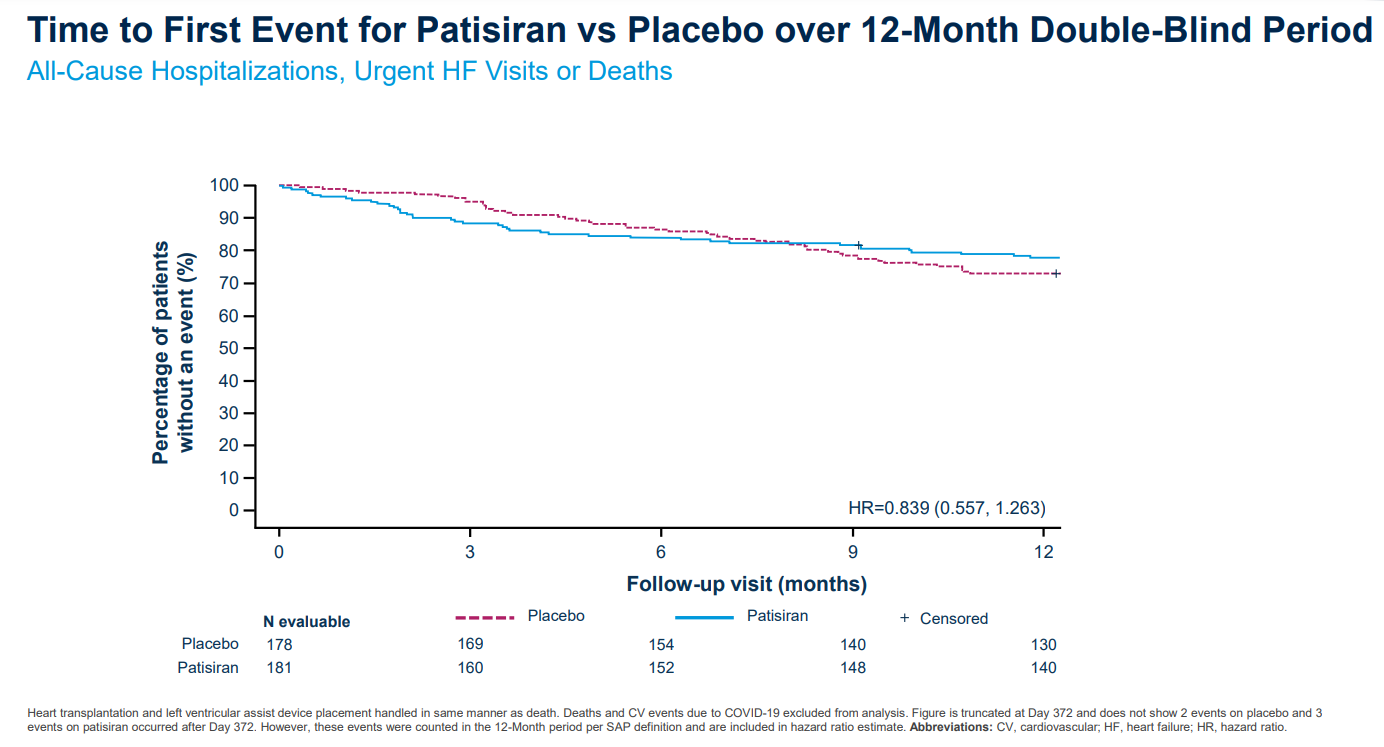 Company execs said this was likely a "chance finding", although they conceded that there had been a "small number of hospitalisations in the Onpattro arm, the majority of which were related to heart failure".

Alnylam seemed more keen to talk about mortality numbers. Using an efficacy analysis, which excluded Covid deaths and treated heart transplants as deaths, there were 10 events in the placebo group and four in the Onpattro cohort.

Alnylam gave a hazard ratio of 0.35, but the 95% confidence interval was wide and crossed 1.0 at the upper bound, so this apparent reduction should be treated with caution.

Overall, Mr Vaishnaw believes that there will be a place for Onpattro in cardiomyopathy. “There is a large number of patients that don't have access to [Vyndaqel], as well as those that have access but aren’t doing well, for whatever reason.”

One issue with Vyndaqel is its high cost of $225,000 per year. Mr Vaishnaw would not say how Alnylam would price Onpattro if it got the nod in cardiomyopathy. In the rarer amyloidosis with polyneuropathy, for which it is already approved, Onpattro costs around $450,000 per year.

Ultimately, Onpattro might merely be a stopgap in cardiomyopathy; the group believes that it will eventually be eclipsed by its longer-acting follow-on, Amvuttra, which is due to yield data from the Helios-B trial in early 2024.

Still, the performance of Onpattro, if it reaches the market, could give an indication of Amvuttra’s prospects – and Alnylam’s chances of hitting its goal of reaching profitability by 2025.

This is an updated version of an earlier story.