It is surely a measure of cancer vaccines’ abysmal track record that a mere 7% overall response rate is enough for a spotlight at an oncology conference. Step forward RO7198457, a personalised neoantigen vaccine in development by Roche and Biontech, the first human data on which have just been unveiled at this year’s second virtual AACR meeting.

However, despite being highlighted at a pre-meeting press conference, results of a phase I multi-tumour study have shown RO7198457 plus Tecentriq to have “modest activity in the heavily pretreated dose-escalation patient population”, admitted Dr Juanita Lopez of Royal Marsden NHS Foundation trust. Some investors will come away wanting to have seen better.

But Dr Lopez insisted that the trial had at least one important aspect, saying: “The thing I’m most excited about is that we’ve managed to show that in the majority of patients we were able to elicit a specific immune response.” It is more typical for an immune response to fail to be initiated, as evidenced by no immune cells being seen within the tumour.

However, Dr Lopez accepted that “this in itself may not be sufficient”.

RO7198457 monotherapy yielded just one, complete, response in 26 evaluable subjects, while in combo with Tecentriq there were eight partial and one complete remission in 108 evaluable patients. One reason for the poor efficacy suggested by Dr Lopez was that subjects had been heavily pretreated, with a median three prior therapies.

It is not at all clear how many subjects might have responded with Tecentriq alone, and Dr Lopez would not indulge in cross-trial comparisons. 39% of the patients entering the combo cohort had failed immunotherapy, but she would not say what the percentage was for the nine responders.

Dr Lopez did detail two remissions, one partial, one complete, in an initial dose escalation: the first was checkpoint-experienced and PD-L1-high, but the second was neither. Further data will be presented on Tuesday. 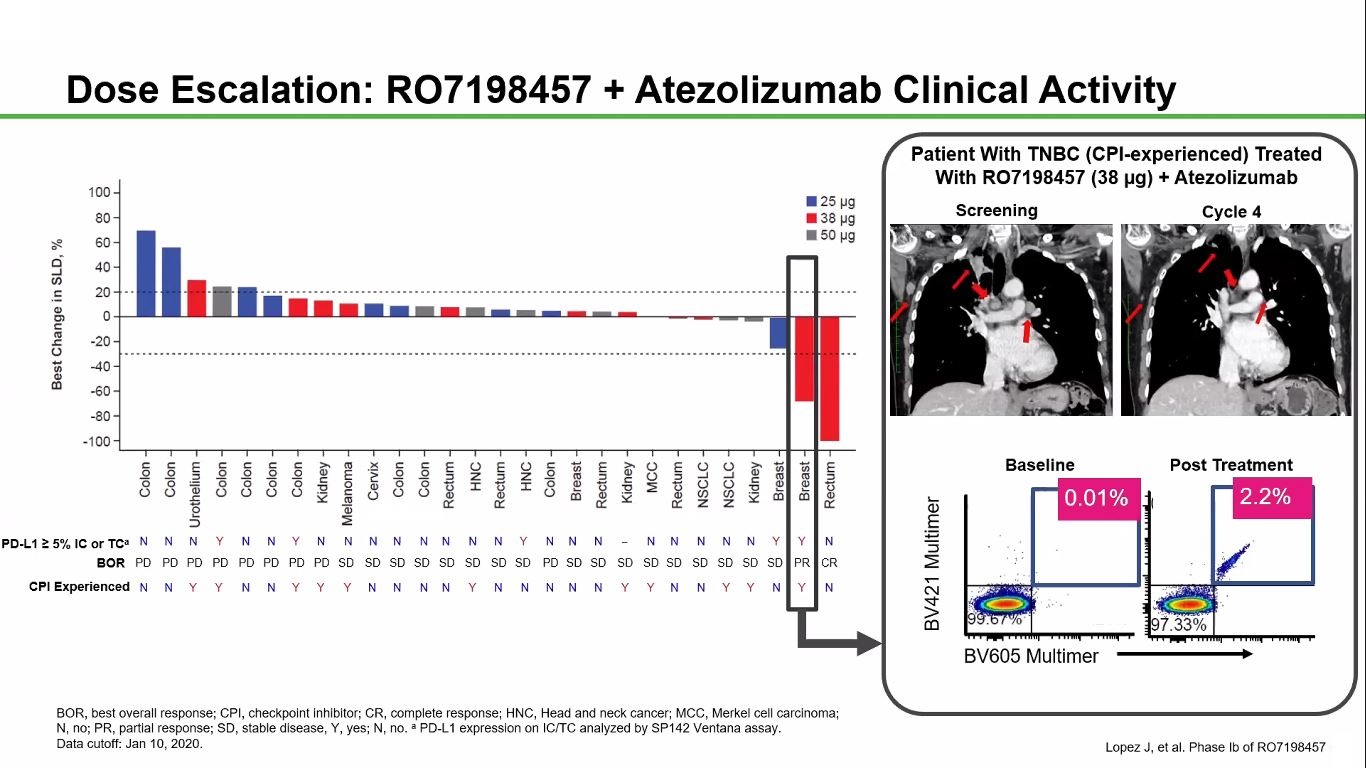 RO7198457, also known under the codes RG6180 and BNT122, is the first project to emerge from a deal Roche and Biontech had struck back in 2016. This, of course, was before Biontech floated and was able to bask in its current $11bn valuation, which is largely the result of its efforts to develop an mRNA vaccine against Covid-19.

Two clinical trials of RO7198457 are now under way: the phase I dose-escalation study just unveiled at AACR, and a phase II trial called Imcode-001, in combination with Merck & Co’s Keytruda in front-line melanoma, which started a year ago. The companies also plan two randomised studies in resected lung and colorectal tumours.

Conceptually RO7198457 is anything but simple, having to be manufactured on a per-patient basis. Each patient’s tumour is analysed and sequenced to identify about 20 neoantigens, for which corresponding mRNA is generated and encapsulated in a liposome that is then injected with the aim of eliciting an immune response.

It is promising that evidence of the mechanistic rationale for such an approach has been shown. But, unless T-cell responses translate into clinical remissions, cancer vaccines will not have a future.