The group does not let the grass grow under its feet, acquiring Tidal Therapeutics before its bigger Synthorx buy has proven itself.

Investors tuning into this weekend’s AACR conference wanting clinical validation for Sanofi’s $2.5bn acquisition of Synthorx will have to wait a little longer. In the meantime, the French group has moved on to further takeovers, yesterday spending $160m on Tidal Therapeutics, a private biotech focused on mRNA technology.

This follows its moves on Kymab, Kiadis, Principia and Synthorx, the last done to access the next-generation IL-2 project Thor-707, which at the time had not yielded any clinical date. Cytokines are a major focus of this year’s AACR, and presentation of Thor-707’s Hammer study just about showed hints of efficacy.

However, it is clearly too soon to say whether Synthorx was worth $2.5bn. Presenting this morning’s AACR late-breaker, MD Anderson’s Dr Filip Janku said Hammer had now enrolled 45 subjects into monotherapy and combination cohorts, but has yielded only three confirmed partial remissions so far.

Two of those occurred in combination with Merck & Co’s Keytruda, so their relevance is debatable, especially as one was in a PD-(L)1 therapy-naive subject. Thus investor focus should be on the remaining remission, in a third-line squamous cell carcinoma patient on Thor-707 monotherapy who experienced 31% tumour shrinkage.

There has been a resurgence in interest in IL-2 and other cytokines, but activity has largely been seen in combination with checkpoint blockade; this is the case with Nektar’s Bristol Myers Squibb-partnered bempegaldesleukin, for instance, which has not shown any monotherapy activity.

Perhaps the most important next-generation IL-2 asset now is Alkermes’s nemvaleukin (ALKS 4230), which made a splash at last year’s Esmo conference. Subsequent updates on nemvaleukin monotherapy have yielded one confirmed PR among 17 melanoma subjects, and two unconfirmed PRs in renal cell carcinoma.

While the jury is still out on Synthorx, some might see positive hints on its monotherapy potential, even if the project ultimately ends up being combined with Libtayo. A final bullish point is that the Hammer data at AACR showed no vascular leak syndrome – a major concern of the initial generation of IL-2 therapies.

It is said to use nanoparticles to deliver mRNA to “reprogramme” immune system cells, with applications in oncology and immune diseases. Investors will note that Sanofi already has a licensing deal with a separate mRNA-focused company, Translate Bio, though that group carries a market cap of $1.3bn.

AACR also features another presentation relevant to Sanofi, namely that on RMC-4630, a Shp2 inhibitor licensed from Revolution Medicines. Shp2 inhibition is said to have potential in Kras-driven tumours, whose treatment could be revolutionised by Amgen and Mirati’s respective Kras G12C inhibitors sotorasib and adagrasib.

However, the AACR abstract, on an RMC-4630 monotherapy trial, showed only three remissions – one complete in uterine carcinosarcoma and two partial in Kras G12C and G12D-positive NSCLC – among 80 subjects with Ras-driven cancers.

Clearly this does not suggest efficacy, and the late-breaking AACR presentation's only signficant addition to the abstract was that one of the two NSCLC remissions was unconfirmed.

Revolution is separately developing covalent inhibitors of the Kras G12V and G12C mutated protein in its on state, and it plans to test RMC-4630 together with some of these later. Further strategies lie in testing the molecule with other projects, including Amgen's sotorasib.

Like Thor-707, perhaps the real promise for Sanofi’s Kras hopes lies in combinations. 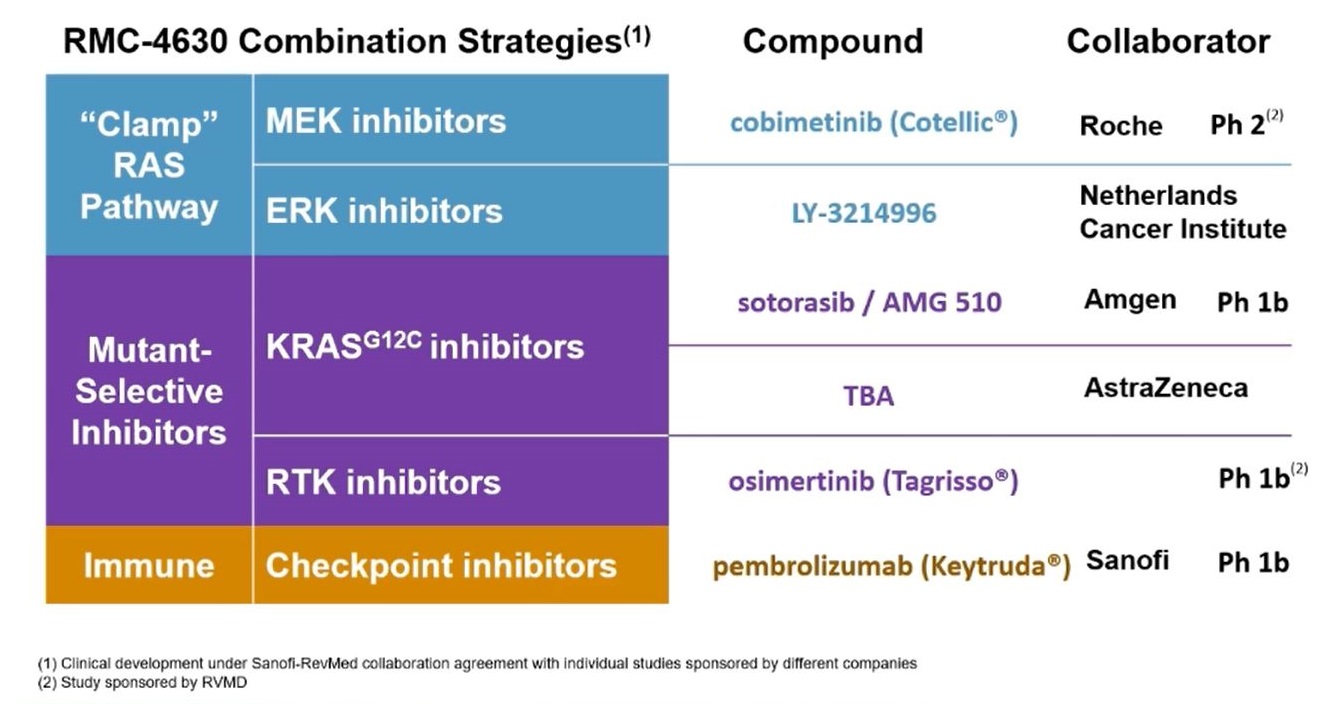 This story was updated to add detail from the RMC-4630 late-breaker presenttion.