The dour biotech market sees little to be impressed about in updates from Bicycle, Rubius, C4 and Zentalis, though well-received data gives Affimed a boost.

Biotechs need to work extra hard for recognition in the today’s market, as amply demonstrated by Affimed today. Despite the company’s NK cell approach being the subject of fresh data at AACR that was widely applauded by both investors and the sellside, the stock was only 14% higher in early trade today.

True, that jump should be read in the context of wider market declines, and the fact that unchecked enthusiasm on early data is a thing of the past. Developers that disappointed at the conference over the weekend were treated even more harshly. The likes of Rubius and C4 Therapeutics have lost more than half of their market value on their respective AACR updates, and conference winners other than Affimed are hard to find.

Full coverage of Affimed’s success can be read here: AACR 2022 – Affimed shows that 2021 was no fluke.

AACR brought a perfect storm for C4 Therapeutics: its IKZF1/3 degrader CFT7455 failed to yield any responses in the first five patients treated its phase 1/2 trial – but the agent did generate a toxicity signal.

The data were released on Friday, and halved C4’s market cap. The stock is down a further 20% in early trading today.

Of the five heavily pre-treated multiple myeloma patients in cohort A of the trial, three patients given CFT7455 monotherapy for 21 days achieved stable disease, while the other two had a best response of progressive disease.

More alarming were instances of neutropenia. Two of the four patients given CFT7455 at the starting dose of 50μg per day had their dose reduced to 25μg due to this side-effect. The fifth patient started therapy at the 25μg dose, based on the recommendation of the safety review committee. In all, four patients had grade 3 or 4 neutropenia, and two had dose-limiting toxicities.

C4 plans to continue with an adjusted regimen, from 21 days on/7 days off to 14 on and 14 off, which it hopes would allow for neutrophil recovery between cycles.

It is possible that C4 was the author of its own destruction. Stifel analysts write that the group took CFT7455 straight into a 21 days on/7 off dosing schedule, rather than testing multiple schedules to find a therapeutic window, probably in an attempt to make up development time against Bristol Myers Squibb. Bristol’s CC-92480, a celmod agent, is two to three years ahead of CFT7455 in this setting (Ash 2021 – Bristol reveals its sons of Revlimid, December 13, 2021).

This time last year the first glimpse of data on Rubius’s lead project, RTX-240, propelled the company to a market cap at $2.4bn. Biotech being in a very different place now, a disappointing AACR update caused the company’s stock to lose almost half its value, capping months of straight declines and sending the shares to a record low. Investors apparently believe that RTX-240 is unlikely to go anywhere; after the collapse of Rubius’s previous lead project two years ago, the foundations of the company’s red blood cell platform are looking ever shakier.

The AACR update concerned two arms of a phase 1 trial, one conducted in various solid tumours and the other in acute myeloid leukaemia. Development in AML is being abandoned, Rubius announced. In this setting RTX-240 only managed to produce five cases of stable disease among 17 patients, albeit in a late-stage patient group.

The solid tumour result was not much more impressive, with one additional unconfirmed partial response joining the two previously reported, one of which was also unconfirmed. Of the 27 patients now evaluable for efficacy, seven achieved stable disease.

The company hopes that adding Keytruda to RTX-240 will boost efficacy further, and outlined plans to study the combination in non-small cell lung cancer and non-clear cell renal cell carcinoma. Limited monotherapy activity curbs further hopes here; the company has enough cash to last until mid-2023, so it desperately needs a win if difficult choices are to be avoided. 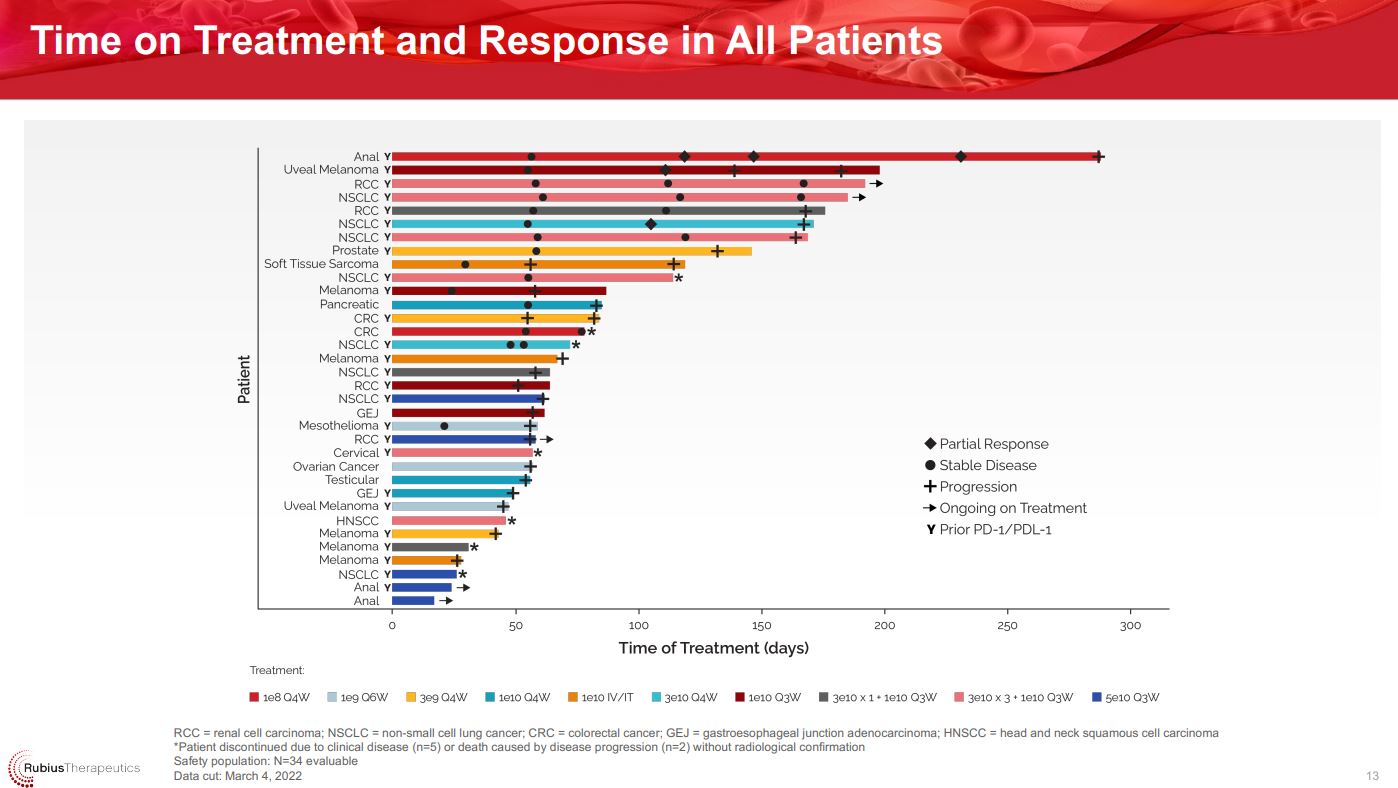 Ups and downs for Bicycle

The 24% jump in Bicycle’s share price on Friday was wiped out today on full disclosure of its update on BT8009, with concerns over safety seeming to take the shine off the abstract boost. The stock was down 34% at press time.

The nectin-4 targeting asset had impressed last year in a bladder cancer cohort, and the AACR abstract pointed to an improving picture in those treated at a 5.0mg/m2 dose. Three previously reported partial responses, among seven patients, improved to one complete response and three partials among eight patients, with the ORR climbing from 43% to 50%.

Little was disclosed about responses in other tumour types, however, and it seems that safety is also something to keep an eye on – some hoped that BT8009 would differentiate itself from Padcev, Seagen/Astellas’s recently launched nectin-4 targeting ADC, on tolerability.

Like Padcev, rash, ocular toxicity and neuropathy were the most common issues, although Bicycle claims that the rates it has seen with BT8009 are lower than with the rival ADC. What might have startled investors was a big jump in the incidence of neuropathy, from 6% in the abstract to 24% in the AACR presentation.

On a call Dominic Smethurst, Bicycle’s chief medical officer, said much of the uplift was related to cases seen in non-tolerated doses that will not be pursued due to dose limiting toxicities. The company says it is “close” to pinning down its recommended phase 2 dose, but it is clear that there is still much work to be done with this asset. Dreams of clear blue water between BT8009 and Padcev have also probably taken a knock.

The 30% objective response rate seen with Zentalis’s Wee1 inhibitor ZN-c3 in refractory ovarian cancer patients was pretty good – but apparently not good enough. The interim efficacy data put the agent roughly on a par with the class as a whole, and its tolerability might even be slightly better.

But investors seem to have been hoping for a more dramatic effect, and sent the stock down 30% on Friday. It is down a further 6% so far today.

The ongoing phase 1b trial sees ZN-c3 given in combination with chemo in patients with platinum-resistant or -refractory ovarian cancer. Efficacy was best when the asset was combined with paclitaxel, but this group comprised just eight patients. However, only five of the 13 responses have so far been confirmed. 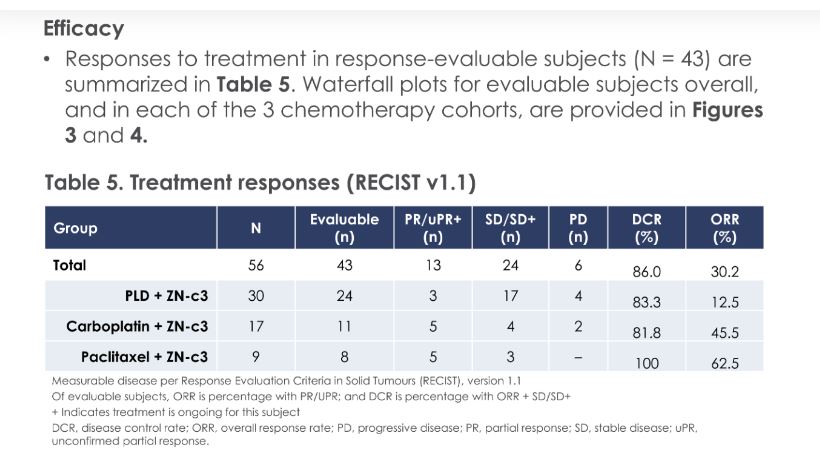 Still, Stifel analysts wrote that the ORR is notably higher than the 20-30% ORRs produced by adavosertib, Astrazeneca’s Wee1, in its phase 1/2 studies. For that project, a 23% ORR translated to a survival benefit versus gemcitabine.

According to Zentalis ZN-c3 had lower hematologic and gastrointestinal toxicity versus the Wee1 inhibitor class as a whole. But it is still not pleasant: as of the cutoff date, treatment-related adverse events at all grades included nausea (48% of patients), neutropenia (41%), thrombocytopenia (38%), vomiting (30%) and anaemia (27%).

The hope for Zentalis now must be that mature data from the trial show an outright best-in-class efficacy. The company is already planning to take ZN-c3 into phase 3.