Even established heart failure drugs have had a hard time showing a benefit in heart failure with preserved ejection fraction (HFpEF). So a surprise finding from the ACC meeting today was that a therapy marketed for idiopathic pulmonary fibrosis, Roche’s Esbriet, has shown promise in a mid-stage investigator-sponsored study in HFpEF.

The findings from the Pirouette trial need to be confirmed, and it is unclear whether Roche has plans to take its product further in HFpEF. There is a lack of options for this form of heart failure, but perhaps not for too much longer: hopes are high for the SGLT2 inhibitors, with pivotal trials of Lilly/Boehringer’s Jardiance and Astrazeneca’s Farxiga in HFpEF set to read out this year.

Now there is a case for Esbriet to join them in late-stage development. However, a separate consideration for Roche is intellectual property, and the composition-of-matter patent on pirfenidone, Esbriet's active ingredient, expired some years ago. Indeed, the drug was launched largely on the back of seven-year orphan drug exclusivity, which expires in the US this year.

The theory behind testing the drug in HFpEF was that, as an antifibrotic agent, it could lead to regression of myocardial fibrosis and therefore improvements in cardiac structure and function. Fibrosis is thought to be an important contributing factor in up to two thirds of patients with HFpEF.

Pirouette focused on 94 patients with both HFpEF, defined as an ejection fraction of 45% or higher, and myocardial fibrosis, measured via cardiovascular magnetic resonance imaging. The primary endpoint was myocardial extracellular volume, a surrogate marker of fibrosis that has been linked with heart failure outcomes. Esbriet statistically significantly reduced this measure versus placebo after 52 weeks, with a p value of 0.009.

Presenting the data today, Dr Chris Miller of Manchester University NHS Foundation Trust said this magnitude of effect would translate into a 9-28% reduction in hospitalisations or death, though this needed to be confirmed in a prospective trial. The final analysis excluded 14 patients who had dropped out or died.

At the time of going to press, Roche had not responded to questions from Evaluate Vantage about whether it had any plans to study Esbriet further in HFpEF. One complicating factor would be screening patients for fibrosis; Dr Miller admitted that this would not be possible at scale with cardiac MRI, and said his group was working on a risk score to predict myocardial fibrosis.

ACC also featured data today on Lexicon’s SGLT1/2 inhibitor sotagliflozin, from the Soloist and Scored studies, across the spectrum of heart failure patients including those with HFpEF.

These trials, despite being prematurely terminated due to loss of funding, had already suggested a benefit in HFpEF. Today, Dr Deepak Bhatt of the Brigham and Women’s Hospital presented a pooled analysis of Soloist and Scored supporting a benefit across all HF patients, including those with HFpEF and HF with mid-range ejection fraction; the last population was defined post hoc. 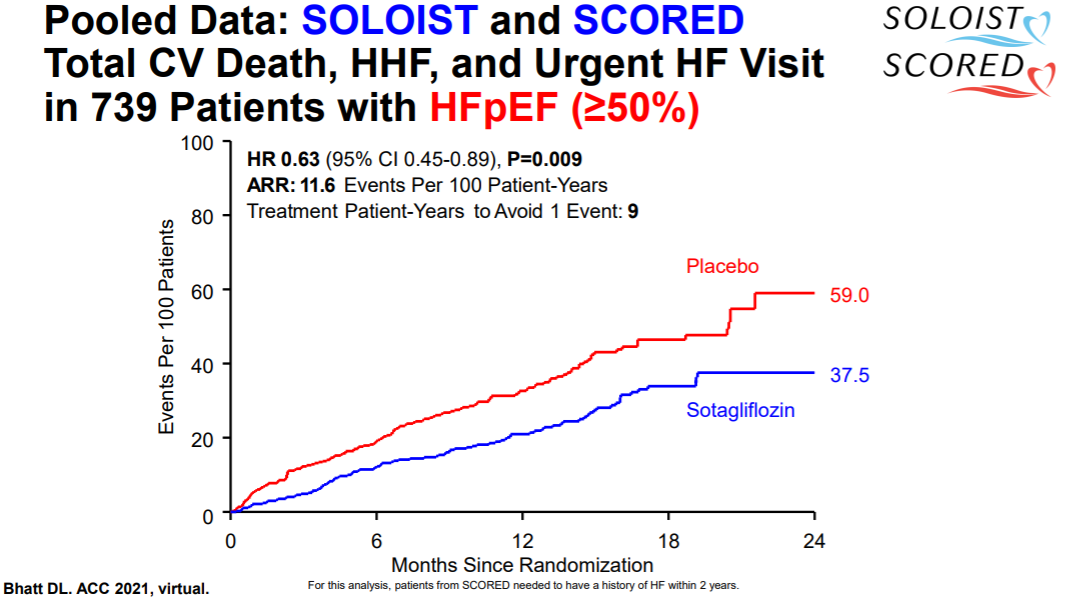 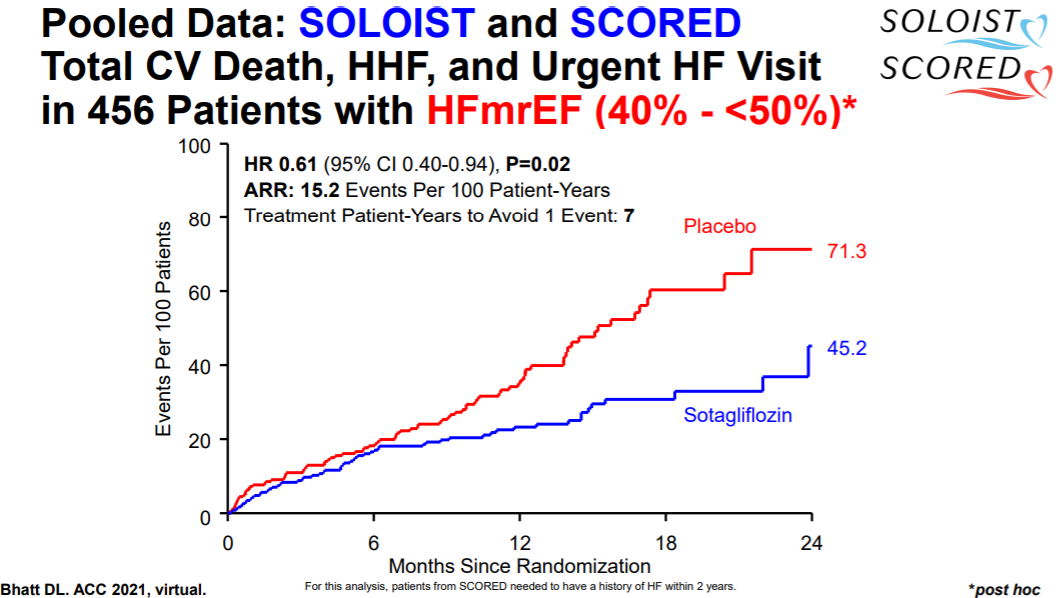 Lexicon plans to file sotagliflozin with the FDA this year in type 2 diabetes patients with either worsening heart failure or additional risk factors for heart failure; if the drug is approved it will be interesting to see whether its label includes HFpEF.

The Soloist and Scored results might also bode well for phase 3 trials of Jardiance and Farxiga in HFpEF, both due to complete this year. Data from the Emperor-Preserved study of the former are rumoured to be slated for this year’s European Society of Cardiology meeting in August.

Dr Bhatt believes that Emperor-Preserved and the Deliver study of Farxiga will be positive, and that there will be a class effect of the SGLT2s in HFpEF. That confirmation might not be long coming.