For a while it looked like Provention Bio’s strategy of licensing in projects that bigger companies had ditched was as doomed as other such business models. But yesterday the group turned the form book upside down, claiming to have delayed the onset of type 1 diabetes for the first time in a clinical trial.

The stock of Provention, which floated on Nasdaq a year ago, surged 300% this morning. The small size of the trial, presented at the American Diabetes Association meeting, is an obvious caveat, but perhaps most curious is that the project in question, teplizumab, had already flunked a pivotal type 1 diabetes trial in 2010.

That study, Protégé, had been sponsored by Macrogenics and Lilly. Its failure to lower subjects’ total daily insulin usage and HbA1c level at 12 months prompted Lilly to can development, but a few years later Provention stepped into the fray and, armed with the $64m proceeds of its IPO, started a new pivotal trial, Protect.

The double-blinded trial that read out at yesterday was not even sponsored by Provention, but rather by the US National Institute of Diabetes and Digestive and Kidney Diseases.

It is important to stress the differences between the settings here: the NIDDKD trial was in subjects that did not have type 1 diabetes, but were deemed “at risk” of developing it by virtue of having a relative with the disease and displaying certain prespecified biomarkers. The Lilly trial tested teplizumab in newly diagnosed patients – and so does Provention’s pivotal study.

Provention will therefore have to bet that Lilly simply picked the wrong endpoint. While Protégé failed to lower insulin use and HbA1c, it did show that teplizumab could reduce falls in C-peptide, a secondary endpoint; low C-peptide suggests low insulin production, and it could therefore serve as another marker for the disease.

Crucially, Protect’s primary endpoint measures C-peptide concentration after 78 weeks, though it is not clear why this but not insulin/HbA1c would have been affected in Protégé. Nevertheless, Provention told Vantage: “The Protect study will be sufficient to submit a BLA ... in patients recently diagnosed".

And it added that “results of the at-risk study are robust enough to support an expedited path to approval under a breakthrough designation”, which seems a bullish reading of the NIDDKD data.

On the plus side, teplizumab was shown to cut the risk of developing type 1 diabetes in these subjects by 59%, with a high level of statistical significance. Median time to diagnosis – after a single 12 to 14-day course of teplizumab – was extended by an impressive two years, Provention said.

However, there were just 44 subjects in the active arm, and the impressive shape of the survival curves is largely determined by five placebo recipients who developed diabetes in the first three months.

Safety is another important consideration: teplizumab is an anti-CD3 MAb, meaning that it knocks out T cells – something that risks leaving patients dangerously immunocompromised. In the active cohort there were meaningful increases in blood or bone marrow and dermatological side effects.

Provention stressed that teplizumab is not a chronic therapy, meaning that adverse events should be transient. EBV reactivation has been seen with previous anti-CD3 approaches, and here quantifiable EBV DNA was detected in the blood of some teplizumab recipients, though levels later fell back to normal.

Assuming that the result is not a fluke, the NIDDKD’s findings support the notion that type 1 diabetes is a disease in which T cells mediate the destruction of insulin-producing islets of Langerhans. Teplizumab might knock out these autoreactive T cells and promote the emergence of T regulatory cells. 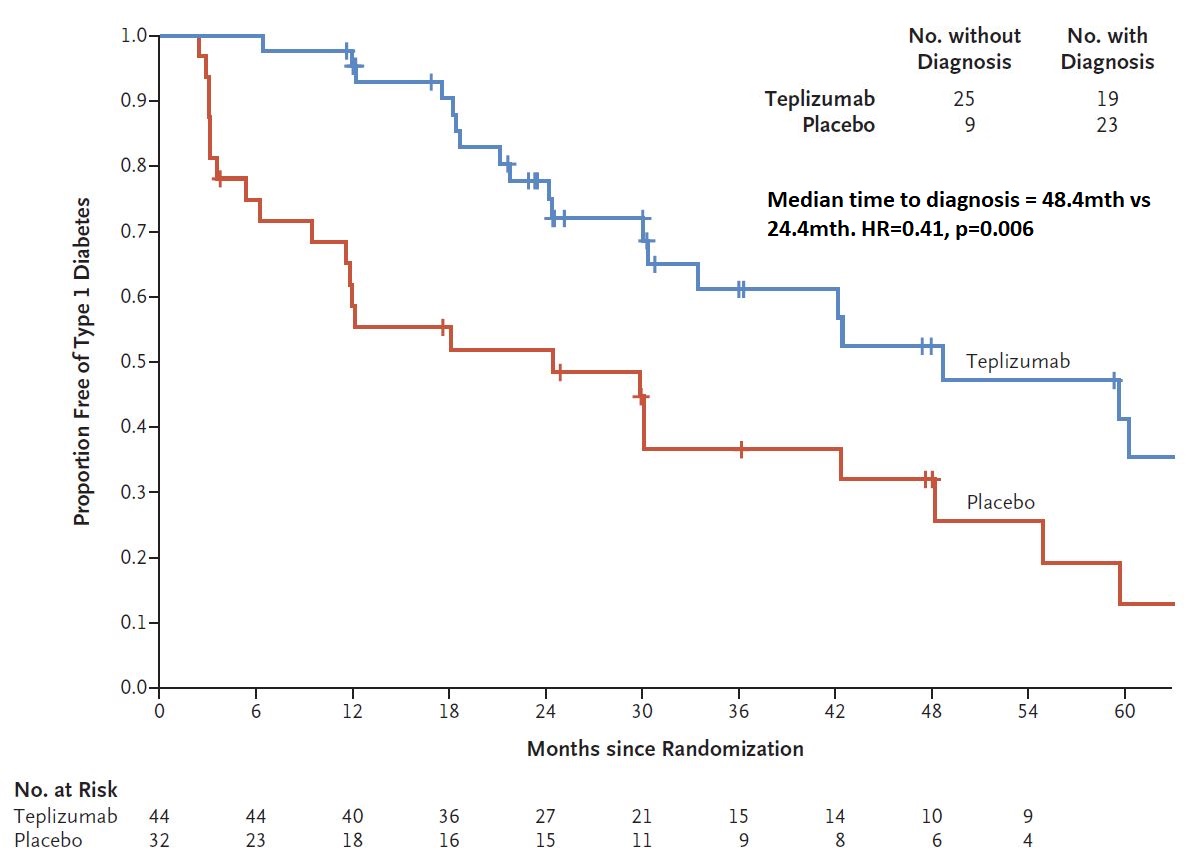 Effects of teplizumab on development of type 1 diabetes. Source: NEJM.

Provention picked up teplizumab, along with the lupus project PRV-3279, from Macrogenics for equity, $42.5m and $22.5m in respective development and regulatory milestones, plus sales milestones and royalties. Just last month Provention’s stock fell 27% when it discontinued PRV-300, an ulcerative colitis project licensed from Johnson & Johnson.

The company must now decide how, in its own words, to “pick up the ball [from NIDDKD] and run with it”. On an analyst call today Provention admitted that until now it had been preparing to expedite teplizumab’s development in the newly diagnosed setting.

Evidently, Provention was as surprised as the markets by yesterday’s result in at-risk patients.