It was billed as one of the big events of this year’s American Diabetes Association meeting. But, in the end, data from the Rewind cardiovascular outcomes study of Lilly’s type 2 diabetes drug Trulicity disappointed.

This was not because Rewind was a failure – as previously reported, the trial found a significant reduction in cardiovascular adverse events in patients receiving the drug versus those on placebo. But, numerically speaking, the results made Trulicity look normal against its GLP1 agonist peers.

True, cross-trial comparisons should always be treated with caution. But on cardiovascular outcomes Trulicity, which is given via a once-weekly subcutaneous injection, appears similar to Novo Nordisk’s once-daily injectable, Victoza.

And Victoza is no longer Trulicity’s most relevant rival – Lilly’s drug is now squaring up against Novo’s newer once-weekly injectable semaglutide, branded Ozempic, and could soon be competing with the Danish group’s even more convenient oral semaglutide, which is set for a US approval decision by September.

Against these competitors, Trulicity comes off worse on cardiovascular outcomes.

But the picture is complicated further, as neither Ozempic nor oral sema can be considered superior to placebo here. The Sustain 6 trial of the former did not include a prespecified superiority analysis, while the Pioneer 6 study of the latter did not meet superiority, although it was a small trial and Novo had long played down expectations (Novo’s next big diabetes bet heads to regulators, 26 November 2018).

Ozempic’s label does not currently include a cardiovascular benefit claim, and oral sema looks unlikely to get one unless Novo can convince the FDA to accept pooled data from Sustain 6 and Pioneer 6. Novo has said it is planning a much bigger CV outcomes study of oral sema, but this would take several years to complete.

If Lilly can get a cardiovascular claim added to Trulicity’s label on the back of Rewind, which could happen in the first half of next year, the company's chances of fending off Novo will get a boost. However, Bernstein analysts do not see this as a given.

Can I get a Rewind?

The primary endpoint of Rewind was the first occurrence of a major cardiovascular outcome, defined as cardiovascular death, non-fatal heart attack, or non-fatal stroke. These events were seen in 12% of patients in the Trulicity cohort and 13.4% in the placebo group; although Trulicity was deemed superior, Bernstein described the p value of 0.026 as “not overly compelling” and the overall data as underwhelming.

And the MACE benefit was driven by a non-fatal stroke; there was no significant reduction in non-fatal heart attack or cardiovascular death with Trulicity. The full data were presented yesterday at the ADA meeting in San Francisco and published simultaneously in The Lancet. 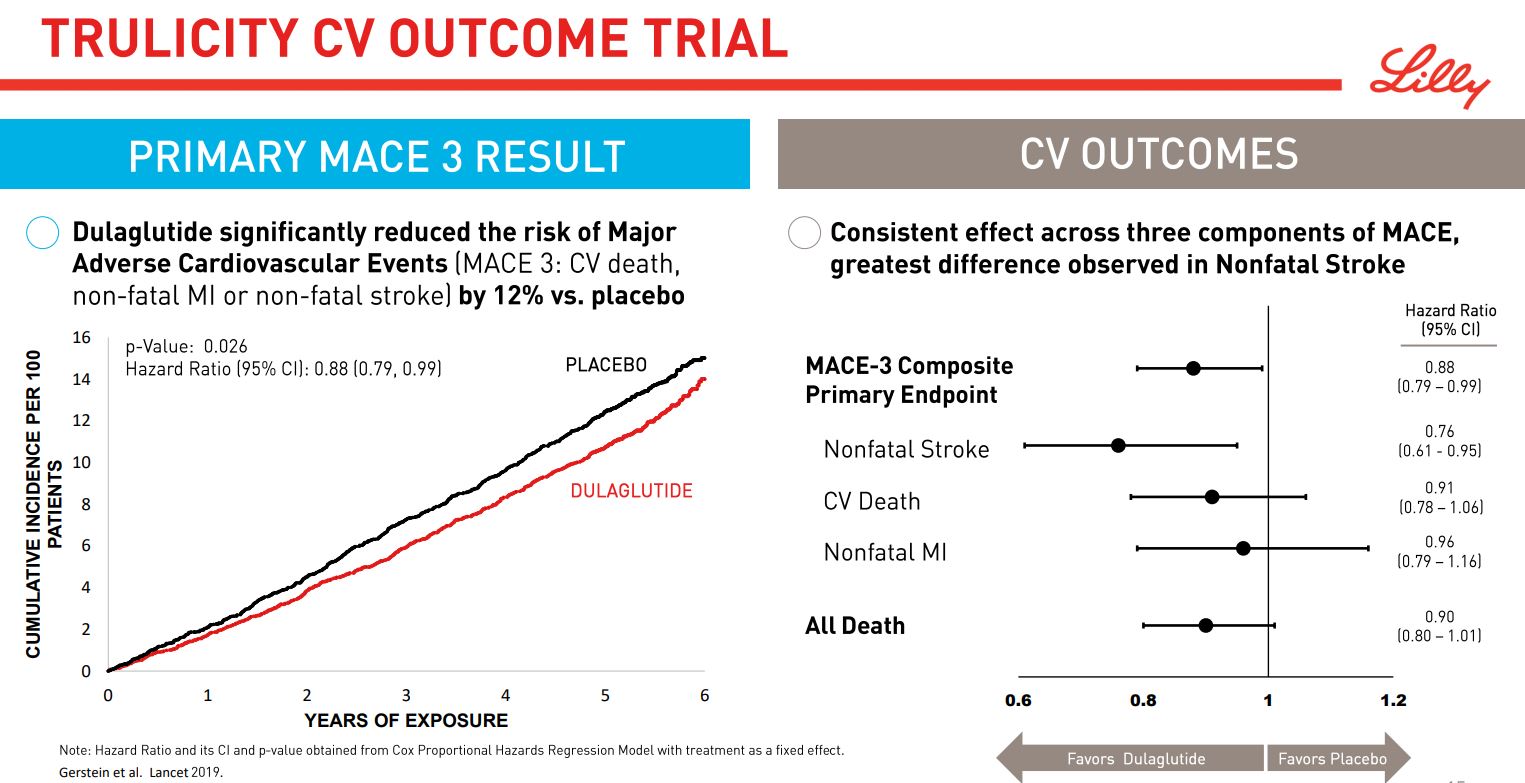 A plus for Lilly was that Rewind showed a benefit in patients both with and without existing cardiovascular disease; 69% of trial subjects had cardiovascular risk factors but no underlying disease. In fact, the risk reduction was the same for both the primary and secondary prevention cohorts, a slightly puzzling finding.

Also at ADA, Lilly presented results from an exploratory analysis of Rewind showing that Trulicity reduced renal events by 15% versus placebo.

However, the cardiovascular outcomes data were the main event, and Lilly’s stock opened down 2% this morning. The company probably did not help itself by setting expectations high, describing Rewind’s results as “compelling” when it toplined the data in November.

Trulicity has so far been holding firm against Ozempic, helped by formulary coverage and price. But Lilly could have done with a stronger result in Rewind to stay ahead of the competition.

Heart benefit now a baseline for Invokana and all diabetes drugs