Full data on Lilly's Alzheimer’s antibody will disappoint some, and point to a long road ahead.

Those with high hopes heading into today’s presentation of Lilly’s Trailblazer-Alz study will be disappointed to learn that the primary endpoint was only just met, and that the key secondary measure failed to hit significance.

True, the trial was technically a success, and the data overall seemed to move in the right direction, something that is rarely seen in the Alzheimer’s field. But it seems certain that the FDA will want to see results from the Trailblazer-Alz2 trial, due in 2023, before it reviews the project; any expectations of a swift filing will be snuffed out by these data (Lilly lines up its next shot at Alzheimer’s, March 10, 2021).

Still, Biogen is seeking approval for its beta-amyloid MAb aducanumb on questionable data and what many believe to be a marginal effect. Should that project be approved in June – an outcome that is far from assured – a low bar would be set for donanemab.

Trailblazer-Alz recruited just 257 patients, another reason why Lilly needs to amass more evidence in support of donanemab. Full results were presented at the virtual AD/PD conference today and published in the NEJM.

It is notable how Lilly’s bullish claims for the outcome contrast starkly with the much more moderate conclusions of the full paper. The authors say donanemab resulted in “modestly less cognitive and functional decline than placebo”. Slowing disease progression by half, which the trial was powered to show, was not achieved.

The significance of the hit on the primary endpoint is lessened somewhat by the use of a measure not well known in Alzheimer’s disease research, iARDS. Lilly had already disclosed that donanemab slowed clinical decline on iARDS by a statistically significant 32% relative to control. Today a 0.04 p value was disclosed, and an absolute benefit of 3.20 points on the scale.

This was the bare minimum that some had wanted to see here: Alzheimer’s experts interviewed by Mizuho analysts before the readout said a difference of at least three points over placebo would be clinically meaningful, and many had hoped to see a higher number.

Donanemab failed to show a significant benefit over placebo on the better known secondary endpoint CDR-SB. The project did manage a 23% slowing of decline versus placebo on this measure – a minimum threshold that some investors were looking out for – but because of the statistical failure this can only be regarded as exploratory.

The miss on CDR-SB means that definitive conclusions cannot be drawn from subsequent secondary endpoints, detailed below.

Lilly's head of neurodegeneration research, Mark Mintun, who presented the data at AD/PD, put a positive spin on this, claiming that all secondary endpoints hit statistical significance for at least one time point. This will not satisfy the statistical purists, but others will be encouraged to see the data trending in the right direction. 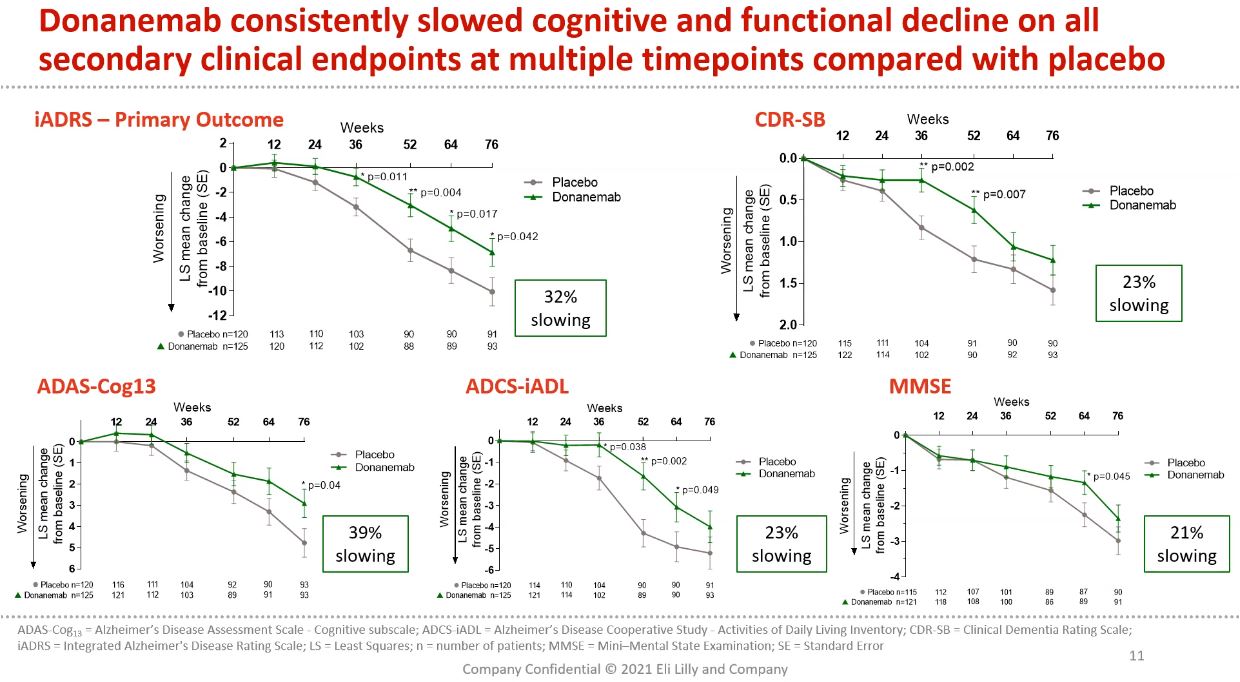 Mr Mintun also called out the importance of selecting patients for Tau burden; Trailblazer-Alz excluded those with high levels, who are known to decline more rapidly. All future Alzheimer’s trials should be based on the pathological stage of the patient, as is done in oncology, he said.

All of this needs confirming in a larger trial, as does safety: the brain swelling condition Aria-E occurred in significantly more donanemab patients than placebo.

Those looking for reasons to continue to back donanemab can point to comparable effect sizes to aducanumab’s result in the Emerge trial, and on which Biogen is trying to win approval. This is a very imperfect comparison; the Emerge result is controversial because of the many adjustments to the data, and of course the usual caveats to cross-trial comparison apply.

Approaching adu's effect size is arguably a very low bar, and many believe that aducanumab should not win approval on such marginal benefit. If this comparison shows anything, it is that donanemab needs to do a lot better in Trailblazer-Alz2 to really impress.

Lilly moves to stack the deck for donanemab

CTAD – Over and out for sola, while Biogen takes the spotlight