It is still far from clear whether Macrogenics will be able to win approval for margetuximab in Her2-positive breast cancer – not least because the pivotal Sophia trial has yet to demonstrate a survival benefit. Full presentation of the results at Asco today, showing a benefit in patients with a particular genotype, could well raise some hopes.

New gastric cancer data, to be detailed by the company today at an investor event, might also help bolster opinions about margetuximab: an impressive 17-month survival benefit has been generated in a second-line setting, and a first-line study will start later this year, the group's chief executive, Scott Koenig, told Vantage this morning.

“We are seeing tremendous responses – the overall survival we have seen not only beats standard of care in second line, but in first line as well,” he said.

Progress in gastric cancer, another Her2-driven tumour type, is comfort of sorts for investors as the next survival analysis approaches for the Sophia breast cancer trial, due in the second half of the year. Margetuximab, an engineered antibody, has been designed to be a “better Herceptin”, and trials in both of these settings are crucial tests of the project

Today’s presentation at Asco provided full details of the first interim analysis of Sophia, which was already known to have hit on progression-free survival (Surprise! Macrogenics could have a commercially viable drug, February 6, 2019).

Sophia recruited a heavily pretreated population – subjects had to have received at least two prior anti-Her2 therapies, and went on to receive chemo plus either Herceptin or margetuximab. Progression-free survival and overall survival were sequential primary endpoints; these data were outlined in a press release a couple of weeks ago.

On PFS margetuximab beat Herceptin by just under one month, a result that was statistically significant but whose clinical relevance looks doubtful. In a subset of patients carrying a particular gene – called the CD16A/158F allele – the benefit was slightly more marked: PFS improved to 6.9 months versus 5.1 months for Herceptin, with a hazard ratio of 0.76.

86% of the Sophia patients were carriers of CD16A/158F, a figure that probably reflects the real world distribution. It has long been suspected that patients with this genotype have a poor response to Herceptin.

An interim look at overall survival appears to confirm this: OS underwhelmed in the total trial population, but thanks to a late separation in the survival curves it was improved at the median in CD16A/158F patients.

Still, shares in the company dropped 13% after the Asco presentation, presumably on the first look at the OS curves. 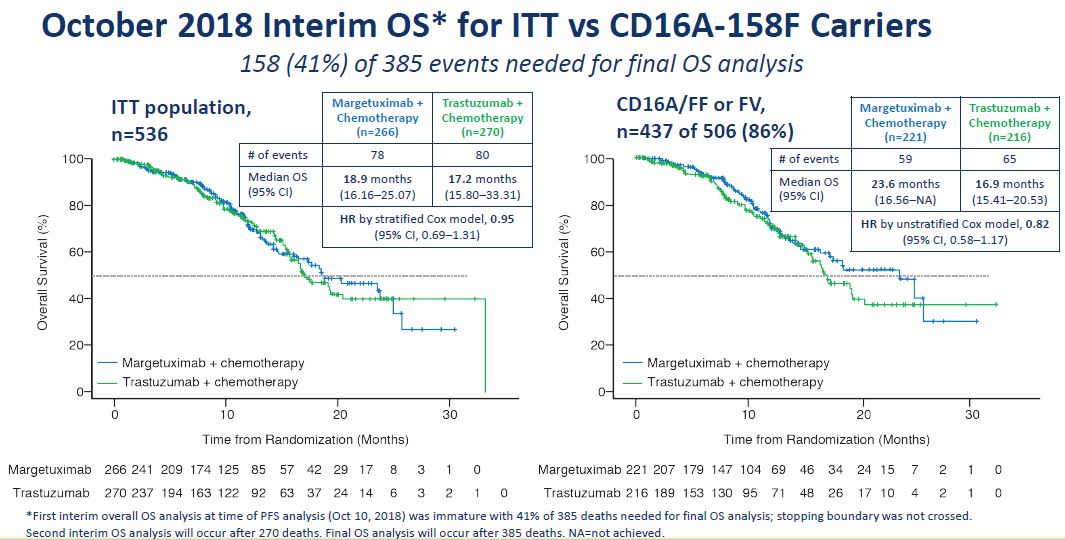 An important point here is that, although stratification by this genotype was prespecified, the findings can only be considered exploratory because no statistical power was attributed to these analyses.

What the regulators make of this remains to be seen, and in any case Mr Koenig said Macrogenics would file on the totality of the data, rather than actively seeking a label in CD16A/158F patients.

“They can decide to restrict it – and we wouldn’t be unhappy if they did restrict it to the 85% of the population… but I would be surprised based on the small numbers [of patients who do not carry the CD16A/158F allele],” he said.

He added that when investigators analysed the patients who did not carry CD16A/158F they found a disparity in terms of elderly and later-line patients, which could also explain the different responses seen.

Macrogenics intends to file when it has the next interim OS data in house, which will happen when 270 deaths have occurred. The final analysis will be triggered after 385 deaths, and Mr Koenig played down the possibility of seeing a survival benefit before then.

“At 270 events it is more likely we won’t hit statistical significance – if we do that would be wonderful,” he said, adding that the FDA had not discouraged the company from filing early. “The guidance to us is if we hit PFS, and there is perceived clinical benefit, that could be the basis of an approval.”

Of course the basis for approval and the basis for commercial success can be entirely different, as previous companies that have shown only marginal efficacy have discovered. Much depends here on regulators’ and ultimately clinicians’ views of the rigour of this exploratory subgroup; Mr Koenig added that nothing in discussions with the FDA had suggested that a request for a confirmatory trial might emerge.

The company is also in talks with “a number” potential partners with regional and worldwide footprints, though no firm decisions have been made about the way forward here, he said. A demonstrable survival benefit would obviously be a huge benefit during such negotiations, adding more pressure on that final survival readout. 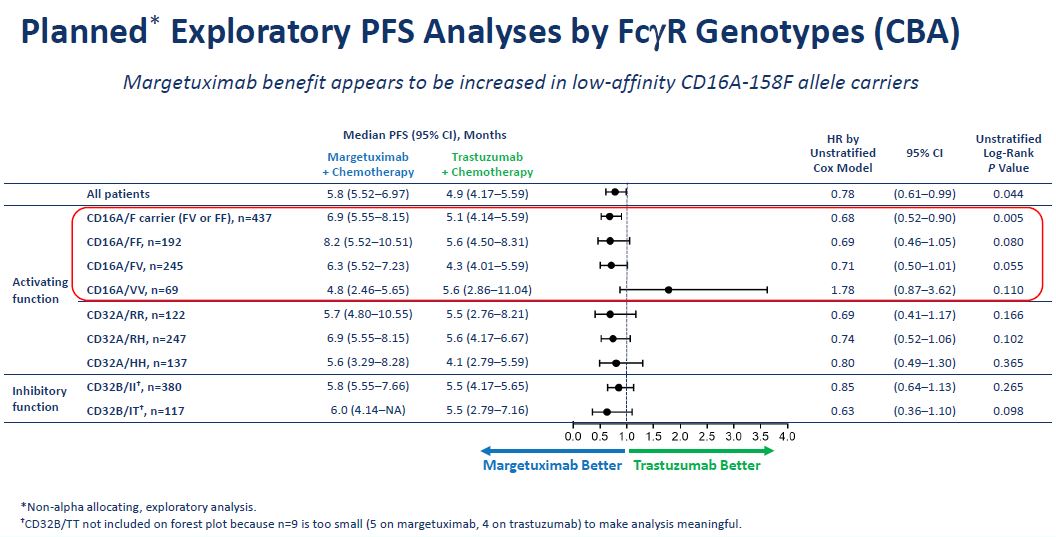