In anti-BCMA therapy Johnson & Johnson looks to have upstaged Bristol Myers Squibb again, and both companies have backups.

While former Celgene investors fret over whether Bristol Myers Squibb will get ide-cel approved in time to trigger the contingent value right under their company’s takeover, Asco showed what competition the product would likely face once on the market.

The multiple myeloma space ide-cel is attempting to break into already looks competitive, and of the BCMA-targeting Car-T therapies on show at Asco ide-cel was again overshadowed by Johnson & Johnson’s JNJ-4528. The latter’s Cartitude-1 study last year yielded a 100% overall remission rate, and since then things have only got better, today’s virtual Asco presentation revealed.

The headline efficacy number is that there are now 25 complete responders in the 29-strong Cartitude-1 dataset. The Asco abstract at an earlier data cut had reported 22 complete remissions, up from 20 detailed at last year’s Ash meeting (Ash 2019 – Johnson & Johnson overshadows Bluebird’s registrational reveal, December 7, 2019). 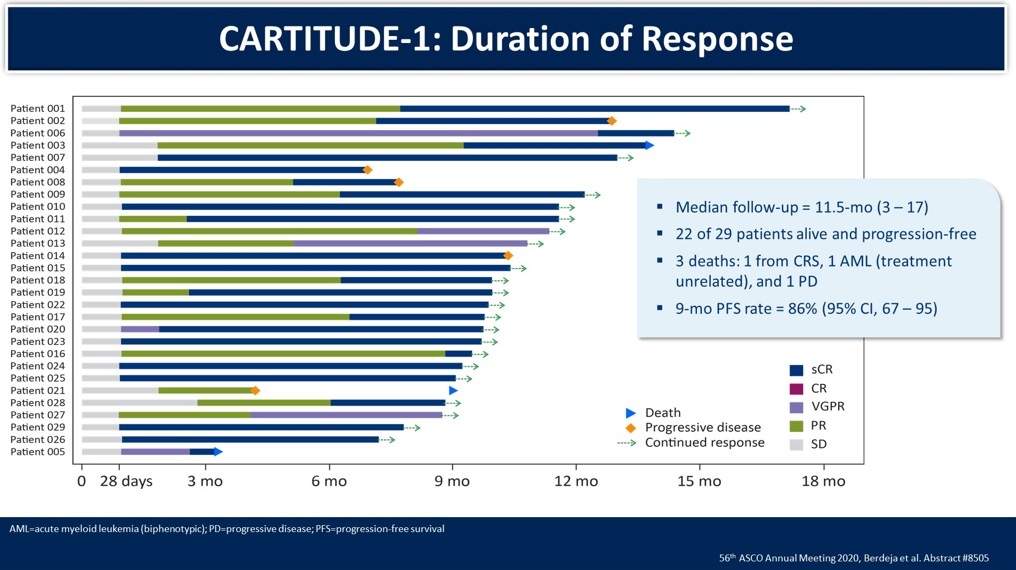 These deepening responses will be seen as highly promising in what on a cross-trial basis looks to be the most efficacious anti-BCMA Car-T project in relapsed/refractory multiple myeloma. JNJ-4528 is now in the phase III Cartitude-2 study, and of course efficacy in a larger trial of this sort is likely to fall off.

Up against JNJ-4528 is Bristol/Bluebird’s ide-cel, with the registrational Karmma study also highlighted at Asco. This too showed some deepening of responses, with overall remission rate rising from 73% to 76%, and two more complete responses versus what had been revealed by press release last December.

On the safety side the two studies were still reporting just one death each due to cytokine release; one additional death not due to disease progression has been noted in Cartitude-1, but this was the result of AML and was said to be treatment-unrelated.

Since ide-cel’s uncontrolled Karmma trial is registrational, a comparison of some sort will have to be made against how patients would likely have fared. To this end Asco saw a separate retrospective presentation of a cohort of 190 “real-world” multiple myeloma patients said to meet Karmma’s eligibility criteria; these showed overall response to various therapies of just 32%. 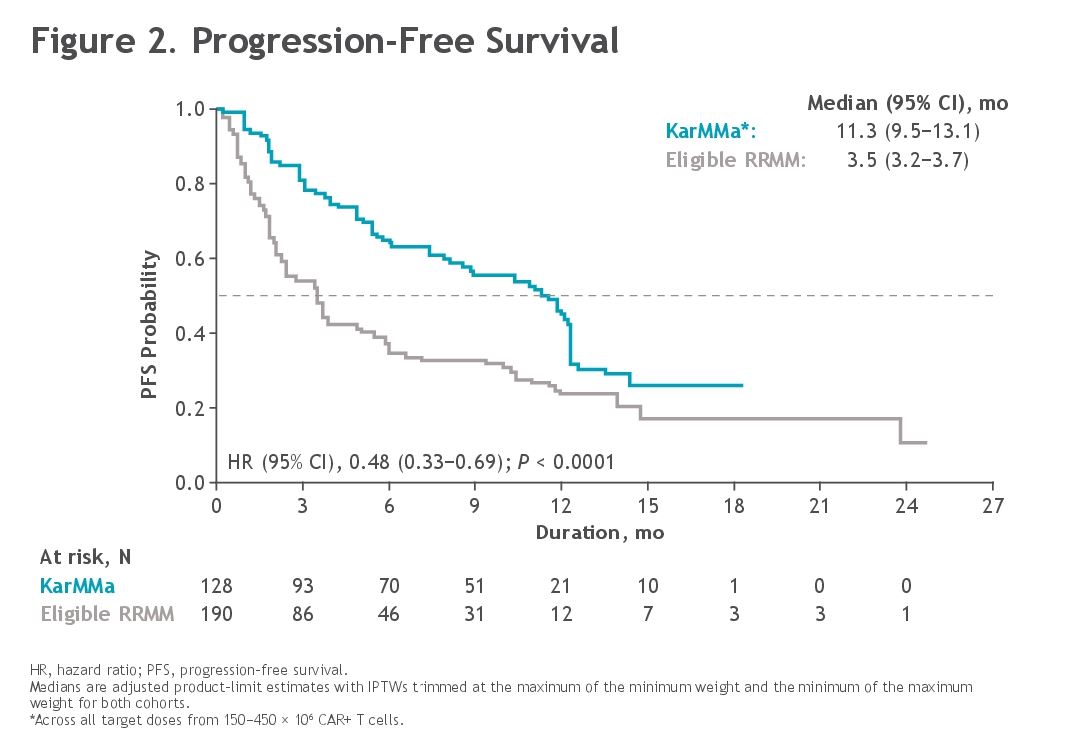 Asco also saw a long-awaited update of Bristol’s second anti-BCMA Car-T therapy, orva–cel. This used to be coded JCARH125, and had been originated by Juno.

Orva-cel’s phase I/II Evolve trial now has 62 evaluable subjects, 22 of whom are said to have had a complete remission, with a further 35 in partial remission. However, there have been two deaths that look possibly treatment related: one cardiac arrest after withdrawal of consent, and one due to macrophage-activation syndrome.

A separate point is that it is still too early to judge the long-term durability of many of these therapies, though all are suffering relapses to some degree. 12 of Evolve’s 57 responders have so far relapsed, though eight were at the low dose, and none have so far been seen at shorter follow-up with the high dose. 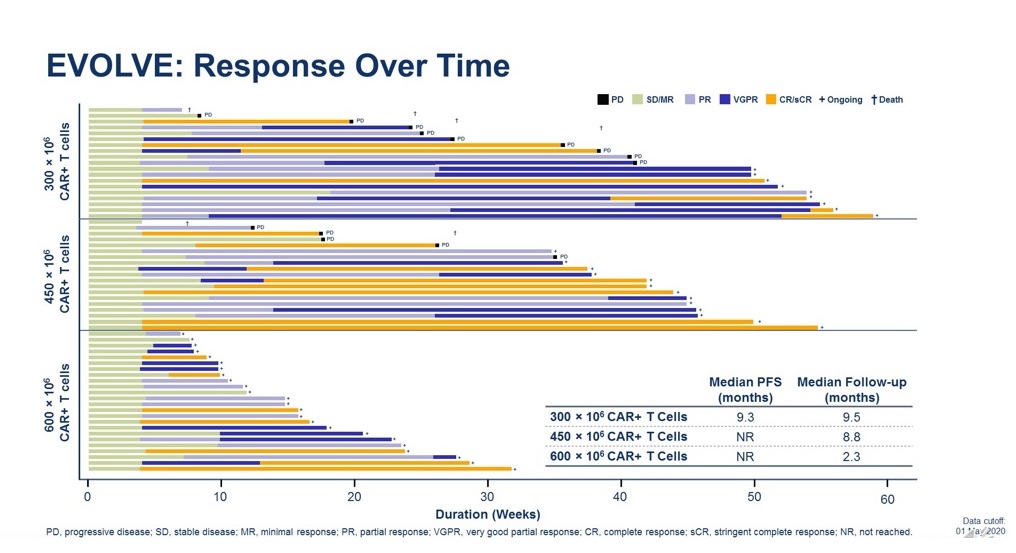 How Bristol might proceed with these two assets is unclear, though ide-cel is clearly its more important focus, making orva-cel a possible back-up.

Interestingly, J&J also has a back-up of sorts, in the form of the anti-BCMA bispecific “duobody” JNJ-7957. Little clinical data have been revealed about this so far: an Asco presentation shows seven of nine patients responding at the highest dose, with one death from respiratory failure.

It might not be reasonable to expect a bispecific MAb to match the efficacy of Car-T in the long term, but the threat could come from its earlier use in treatment, if it is priced below that of Car-T. In a similar vein, Glaxosmithkline is pinning its hopes on an anti-BCMA antibody-drug conjugate, belantamab, for example.

As luck would have it, Bristol recently amended the protocol of the Evolve trial of orva-cel to include a cohort of patients who had progressed after prior BCMA-directed therapies.

Springworks seeks cancer win as a prelude to something bigger

Ash 2019 – for Car-T the bispecific antibody threat is real