The Merck & Co drug looks to extend its position in a biomarker-defined colorectal cancer niche, but is it too early to declare victory?

With only half of the data available for Merck & Co’s Keynote-177 study of Keytruda it seems premature to say the results will change clinical practice. Yet this is what researchers are claiming in a late-breaking Asco presentation that hails Keytruda as a new standard of care in first-line MSI-high/MMRd colorectal cancer.

Three years ago Keytruda was approved in MSI-high/MMRd cancers, becoming the first oncology drug to secure a tumour-agnostic label, though this was in the second-line setting. Keynote-177 was toplined in April, but of the co-primary endpoints only progression-free – and not overall – survival was said to be positive. The Asco data do not alter this situation.

What they do, however, is quantify the extent of the benefit Keytruda confers. This amounts to 16.5 months of median PFS, versus 8.2 months for chemotherapy control, the just-unveiled Asco late-breaker reveals. 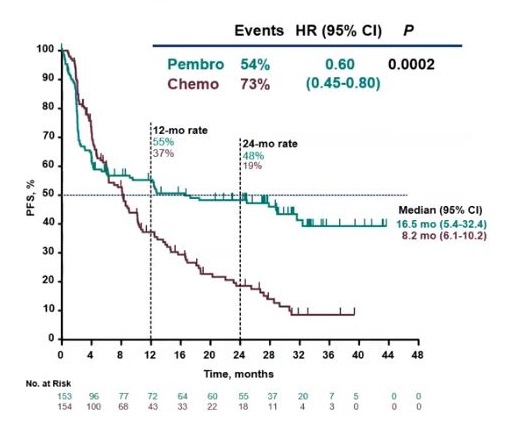 Importantly, some subjects derived an especially strong PFS benefit, resulting in continued separation of the survival curves after the median was reached. Accordingly, the reduction in risk of progression across all subjects was 40% (p=0.0002), said Keynote-177’s lead author, Dr Thierry André of Hôpital Saint Antoine in Paris.

However, nothing has been revealed about Keytruda’s effect on Keynote-177’s second co-primary measure, OS, presumably because the data are insufficiently mature. Indeed, the widening PFS curves with time shows that there likely have not been enough deaths to derive much meaning from an OS analysis.

“The study met one of the two primary endpoints, and is definitively a positive trial,” Dr André told an Asco press briefing. “In the past no medical treatment has shown such a difference in terms of improvement of PFS in metastatic colorectal cancer. [Keytruda] should be the new standard of care ... some patients were cured of metastatic disease.”

This bold statement is backed up by the fact that an astonishing 40% of Keytruda recipients appear still to be free of disease at over 40 months. Another peculiar feature of the PFS curves is that they cross over early on, suggesting that disease in some Keytruda patients initially progresses faster than with chemo, though this could be down to pseudoprogression.

Keynote-177 will continue to final analysis, at which point OS will be evaluated. In the absence of OS data, another key factor in Keytruda’s favour is safety: grade 3 or higher treatment-related adverse events were seen in only 22% of Keytruda subjects, versus 66% in those on chemo control.

MSI (miscrosatellite instability) high and MMRd (mismatch repair-deficient) cancer has turned into something of a battleground between Merck and Bristol Myers Squibb.

Bristol is running a phase III trial, Checkmate-8HW, in MSI-high/MMRd colorectal cancer that includes front-line subjects, but apart from this there do not appear to be any significant immediate challengers to Keytruda in this space.

Last month Merck had said it would move to share the Keynote-177 data with regulators, which tends to be code for a filing. Whether the US FDA gives the green light without waiting for an OS analysis is now the main question.