Asco 2020 – Tagrisso shows what early targeting can do

With an 83% reduction in the risk of disease recurrence in early-stage lung cancer, Astrazeneca’s Tagrisso takes the top spot at Asco.

The Adaura trial of Astrazeneca’s Tagrisso in EGFR-mutated lung cancer was stopped two years early for overwhelming efficacy last month, and was promptly chosen for the top plenary presentation at this year’s Asco. The full results show why.

The study tested Tagrisso as an adjuvant treatment after surgery, and generated an 83% reduction in the risk of disease recurrence. Sellside analysts have already added billions of dollars to the drug’s sales forecasts on the promise of these results, and with another important early-stage study on the horizon consensus could rise further.

The aim of adjuvant therapy is to prevent disease recurrence, and patients can receive the intervention in question for a relatively long period, certainly compared with metastatic use. Adaura was designed to test a three-year treatment duration, for example, which partly explains why the win here was considered so important by financial analysts: consensus for sales in 2024 jumped 16% to $7.4bn last month, according to EvaluatePharma.

The study also focused on a big slice of the non-small cell lung cancer population. It recruited subjects with stages IB, II and IIIA NSCLC, who account for around 30% of the population presenting with this disease. Patients had to have an EGFR mutation, of course, and Tagrisso only works in these; however, it is thought that 10-20% of patients in the US and Europe, and around 30-40% in Asia, harbour this genetic signal.

Tumours at this stage can be removed with surgery, but the cancer tends to recur; adjuvant cisplatin-based chemotherapy is the current standard of care, which carries substantial toxicities.

Although Adaura was stopped early − it had completed enrolment and all patients were followed for at least a year − Tagrisso unequivocally demonstrated its potential. Disease-free survival at two years was 89% with Tagrisso compared with 53% with placebo, while a look at the survival curves shows why the decision to stop early was taken. These results will be presented in full on Sunday at Asco's virtual plenary session. 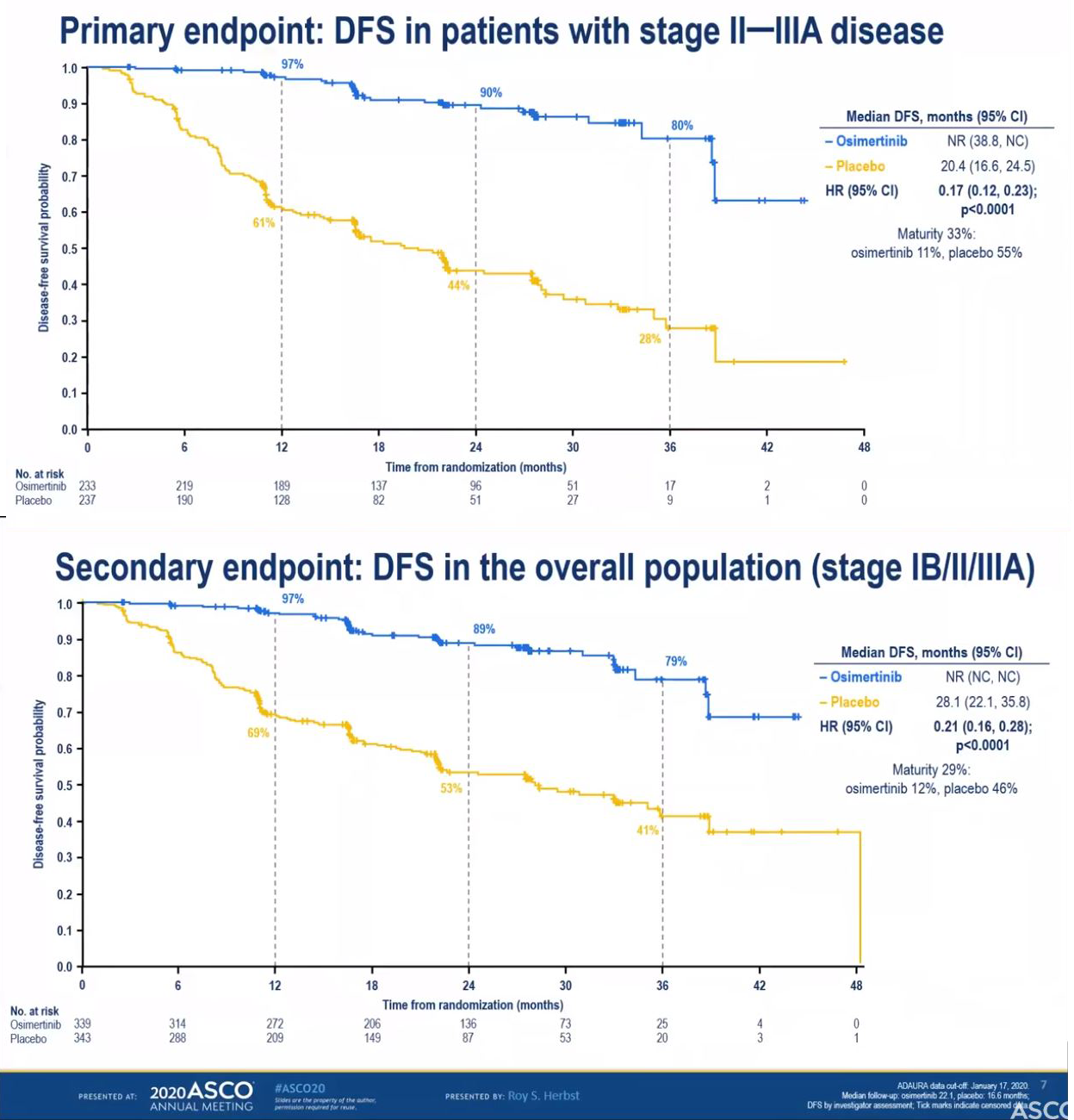 The study recruited 682 patients who were given either Tagrisso or placebo as adjuvant therapy; the primary endpoint was disease-free survival by investigator assessment in stage II-IIIA patients, while secondary endpoints included DFS in the overall population and overall survival.

Given the only slightly less impressive result in the overall population of stage IB-IIIA patients it seems logical to expect approval to encompass the entire group. Patients were stratified by various categories, and in every subgroup – stage of disease, smoking status, or whether the patient also received adjuvant chemotherapy – the results favoured Tagrisso.

“I’ve done many of these [subgroup analyses] over the years and you almost never see this,” Dr Roy Herbst, chief of medical oncology at Yale Cancer Center and primary investigator, told an Asco press briefing. “This trial is a home run. It exceeded our expectations.”

Dr Herbst told Evaluate Vantage that he expects an overall survival benefit to be seen, although it will take around two more years for sufficient data to be gathered.

“It’s metastasis that kills patients. Disease-free survival prevents metastasis and clearly is important to patient outcome and quality of life,” he said.

Tagrisso is not without toxicities, but the issues reported in Adaura seem unlikely to hold back use here. This is important because physicians now hope that the drug will prove useful in other early settings.

This is already being tested in the Laura study, which is recruiting patients with unresectable stage III NSCLC, with Tagrisso used as maintenance in patients who respond to front-line chemoradiation. Stage III patients represent around a third of NSCLC patients, according to Astrazeneca, and most are diagnosed with tumours that cannot be removed by surgery.

The company confirmed to Vantage that Laura was still recruiting and that results were expected in 2022, but declined to provide information on any planned interim analyses. Dr Herbst, meanwhile, is also optimistic of Tagrisso's activity in this setting.

“Laura is a bit later stage [than Adaura] and should be successful,” he told Vantage, adding that Tagrisso could feasibly now be investigated in neoadjuvant settings, or even as a chemoprevention, and perhaps in patients with pre-malignant lesions to prevent cancer.

Dr Herbst believes that the Adaura results herald “a new paradigm for using precision, targeted agents earlier in disease”. This implies that more patients could in the future be offered the chance of a cure, which will come as a heartening prediction for many attendees at this year’s Asco.