Asco 2021 – Bristol’s Lag3 case for a replacement for Yervoy

The Relativity-047 study shows that relatlimab has a big safety advantage over Yervoy, with just a slight decrease in clinical benefit.

Going into the virtual Asco meeting the sellside’s main concern over the groundbreaking Relativity-047 study of Bristol Myers Squibb’s relatlimab plus Opdivo was that it would not back this combo over one containing Yervoy. Data just unveiled should dispel such fears.

Relativity-047, a trial in first-line melanoma, has yielded a 12-month progression-free survival rate only slightly below that in Yervoy/Opdivo’s corresponding Checkmate-067 study. But there is a vital advantage: severe treatment-related adverse events were 19% with the relatlimab combo – less than a third of that seen with the notoriously toxic Yervoy.

The full data have been keenly awaited ever since Relativity-047 was toplined positive in March (Bristol is no Lag3-ard, March 25, 2021). They marked Lag3 blockade, relatlimab’s mechanism of action, as a potential new entrant into immuno-oncology, a field in which numerous once hotly touted mechanisms have fallen by the wayside.

Still, questions remained. The win was on progression-free and not overall survival, so was this an approvable dataset? And could relatlimab edge out Yervoy, an anti-CTLA-4 MAb, as the preferred combo partner for Opdivo?

Based on the data just unveiled from Relativity-047’s upcoming Asco presentation, the answer to the second question might be yes. The data appear to give Bristol a new option to add to its combo armamentarium, at least in front-line melanoma. 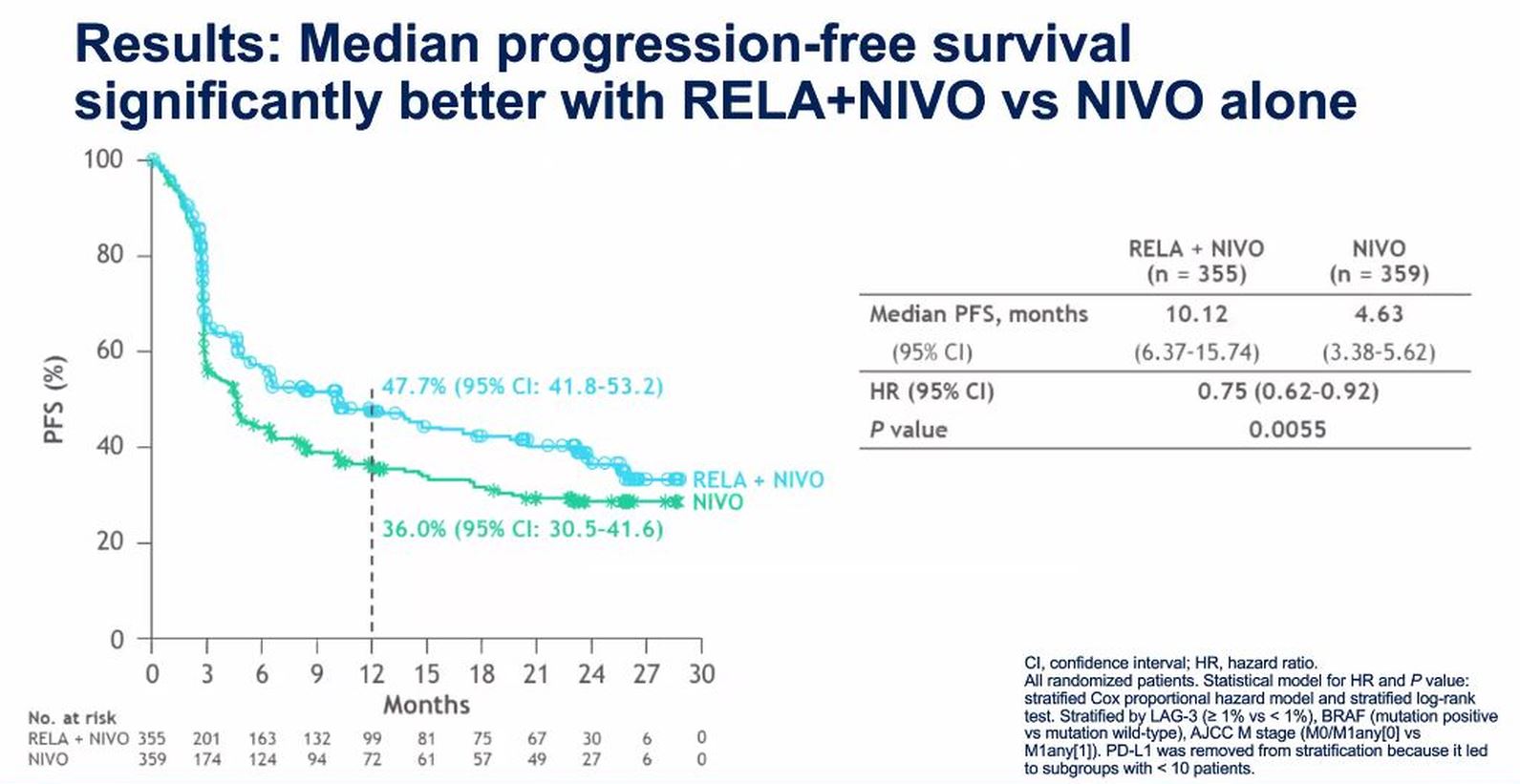 The take-home message of the clearly designed Relativity-047 trial was a median PFS of 10.1 months for relatlimab plus Opdivo, versus 4.6 months for Opdivo alone. Overall risk of progression was reduced by 25% (p=0.0055), Dr Evan Lipson of Johns Hopkins University told an embargoed Asco press briefing on May 14.

Though Dr Lipson stressed that it was “difficult to compare study to study”, this is precisely what analysts will do. And in Checkmate-067 Opdivo plus Yervoy yielded a slightly higher median PFS of 11.5 months, and a 12-month landmark PFS rate of 50%.

Moreover, adverse events analyses look striking: just 18.9% of patients given the relatlimab combo had severe treatment-related adverse events, versus 59.0% in the Opdivo plus Yevoy cohort in Checkmate-067. Of course, without overall survival data, which in Relativity-047 are still insufficiently mature, a gold-standard comparison cannot be made.

Dr Lipson played up the fact that Opdivo plus relatlimab was given as a fixed-dose 480mg/160mg combination, which reduced complexity and cut the risk of dosing error. Relativity-047’s robustness was demonstrated by the Opdivo monotherapy arm performing in line with data from the Checkmate-066 monotherapy trial.

The full Relativity-047 data, due to be presented at Asco on Sunday, June 6, will be of huge interest to other groups working on Lag3, not least the Australian biotech Immutep, which has three separate approaches concerning this pathway.

Among other players, Merck & Co is set to present fist-in-human data at Asco for its MAb MK-4280, now given the INN favezelimab. Its just unveiled abstract shows an ORR of just 6%, with one complete remission, in 80 third-line or later MSS-stable colorectal cancer patients given favezelimab plus Keytruda; there were no responses to favezelimab monotherapy.

Clearly for Merck it is still early days. For the whole field, however, Dr Lipson is in no doubt about the importance of Relativity-047, which “establishes Lag3 as the third immune checkpoint pathway in history after CTLA-4 and PD-1 for which blockade appears to have clinical benefit”.

Asco 2021 – adjuvant lung cancer beckons for Tecentriq, but only in PD-L1 expressers