Asco 2021 – financial toxicity in the spotlight

The long overdue advent of US cut-price oncology drugs is a major theme at this year’s Asco, and Junshi’s toripalimab leads the way.

The selection of a trial of toripalimab in an obscure cancer type for one of Asco’s coveted late-breaker presentations might initially have seemed an odd move. But the drug could become the first cut-price anti-PD-(L)1 in the US, and access to cancer medicines is a major topic at this year’s Asco.

The theme of Dr Lori Pierce's recently begun tenure as Asco's president is “Equity: every patient. Every day. Everywhere.” And the late-breaking Jupiter-02 study concerns a cancer for which toripalimab is to be filed under a US deal with Coherus, whose mission is “to increase access to cost-effective medicines”.

Thus toripalimab’s tardiness – it could become the 10th anti-PD-(L)1 MAb to be launched in the US – will not matter much if Coherus succeeds in undercutting the established players on price. Of course doing this is easier said than done, but price competition has been woefully lacking in immuno-oncology, despite the numerous treatment options now available.

The precise focus of Jupiter-02 is front-line nasopharyngeal carcinoma, a tumour less relevant to the west than to Asia, which accounts for 70% of the world’s new diagnoses. But as no other anti-PD-(L)1s are available for it in the US it could provide an easy route to market.

At an embargoed Asco presscast last week Dr Rui Hua Xu, of Sun Yat-Sen University Cancer Center, presented data for progression-free survival, Jupiter-02’s primary endpoint, showing a 48% reduction in risk of progression for toripalimab plus chemo versus chemo alone (p=0.0003). The overall survival curves are separating too, but with medians not reached the data are still immature. 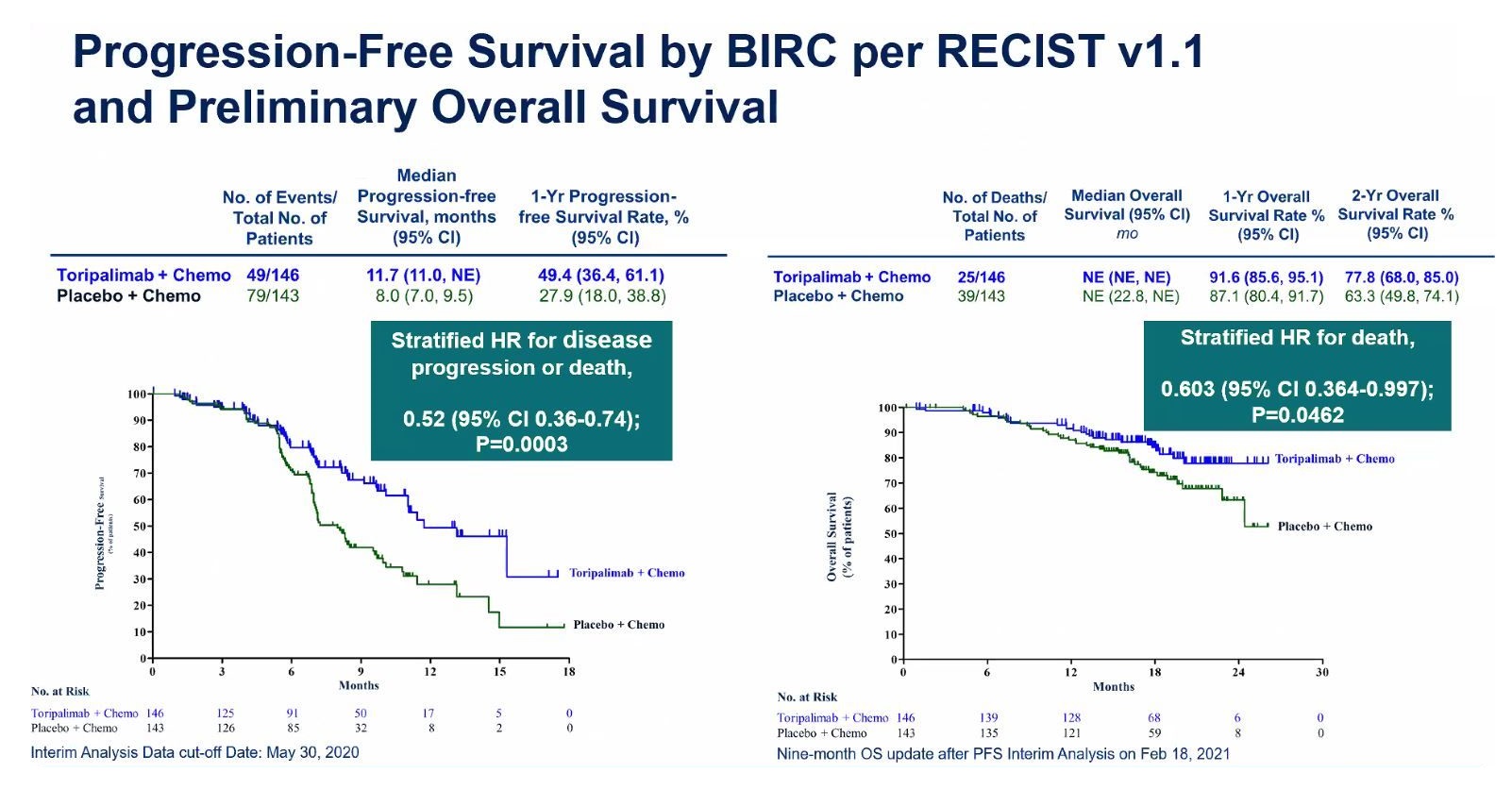 In China toripalimab is already marketed as Tuoyi under a local deal with Astrazeneca, for second-line melanoma and urothelial bladder cancer and in third-line nasopharyngeal carcinoma. The last, though not the Jupiter-02 front-line setting, has US breakthrough therapy designation, and is to be the subject of a 2021 US FDA filing.

Coherus paid Junshi $150m for North America rights to toripalimab in February, a deal that came five months after Jupiter-02 was toplined positive after an interim analysis.

Despite Coherus’s mission to boost patient access, the company has recently seemed to row back from an all-out price war, saying this was not the sort of market where “you go in with steep discounts”. However, it continues to talk about price discounting, even if this is not a primary driver with toripalimab.

That said, financial toxicity is a live issue in oncology. In April Bernstein’s Ronny Gal published an open letter to the chief executive of Regeneron, saying the group should “explicitly adopt a price-discounting strategy in commercialising Libtayo”, and thus give the drug a “brand halo”.

“A gradual discounting strategy could net Libtayo at least 10% market share across the larger indications,” wrote Mr Gal. “The alternative (pricing at parity with competitors) could result in irrelevance for Libtayo. Three additional PD-1s will likely reach the market in 2022-24 [including] Coherus, which has been explicit about plans to use financial incentives.”

Asco, despite its “equity” message, did not give a specific answer to a question from Evaluate Vantage at last week’s press call on what might be a meaningful US discount for toripalimab and how this could be achieved.

But the cat is surely out of the bag. A separate Asco presentation, to be discussed tomorrow, concerns additional safety data for the EGFR inhibitor aumolertinib, which EQRX intends to launch as a cut-price competitor to Astrazeneca’s Tagrisso in the T790m lung cancer space.

And, away from Asco, the cost-cutting EQRX and Cstone are collaborating on an anti-PD-L1 project, sugemalimab. Last month this was said to have succeeded as consolidation therapy in the Gemstone-301 study in stage III NSCLC, a market sector currently shared by Astrazeneca’s Imfinzi and Merck & Co’s Keytruda.

For now this single-centre China study will have limited relevance in the west. And competitors on price will find it hard to undercut current market behemoths, with their complex payer and wholesaler agreements. But you can bet that EQRX, Coherus and others have a plan.