177Lu-PSMA-617 shows impressive survival results in the Vision study, but early use will be key to fulfilling its potential.

A late-breaking Asco presentation has confirmed a Novartis radioligand’s potential as a new treatment for late-stage prostate cancer. While this takes some of the heat off the Swiss firm for spending $2.1bn to acquire the project, 177Lu-PSMA-617, there is still some way to go before the sellside’s bloated forecast is met.

Analyst consensus sees 177Lu-PSMA-617 selling $741m in 2026, giving the asset an NPV of $3.9bn and making it Novartis’s second-most valuable R&D endeavour, according to Evaluate Omnium. But the trial in question, Vision, concerns at least a third-line setting, and much of the forecast will hinge on early use.

Not that this should detract from Vision, a study that had been toplined positive for OS and PFS in March. The Asco readout will derisk Novartis’s 2018 acquisition of Endocyte, a deal remarkable for the fact that 177Lu-PSMA-617 had apparently been worth a fraction of the $2.1bn purchase price just a year earlier (Novartis’s nuclear vision starts to take shape, March 23, 2021).

Vision enrolled metastatic castrate-resistant prostate cancer patients who had progressed on one or more anti-androgens as well as one or two chemo regimens, and compared 177Lu-PSMA-617 on top of standard treatment – including Zytiga or Xtandi – versus standard treatment alone.

Dr Morris revealed Vision’s co-primary endpoint win, with risk of death cut by 38% versus standard treatment (one-sided p<0.001), and risk of radiographic disease progression reduced by 60% (one-sided p<0.001). Side effects were more common with 177Lu-PSMA-617, a PSMA-directed beta emitter, but none was said to be unexpected. 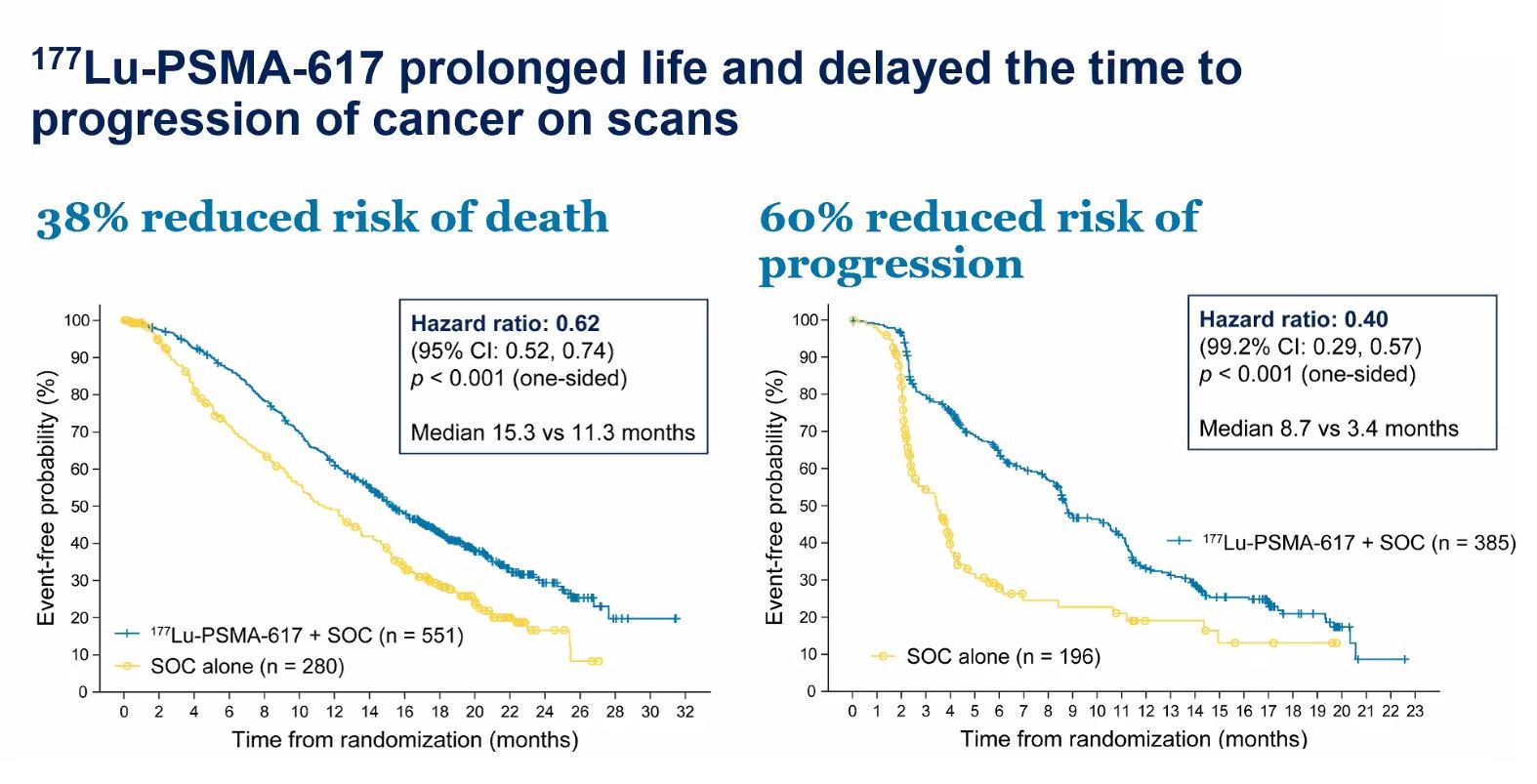 One aspect of Vision that could limit sales is its biomarker-defined focus, but whether a potential label reflects this will be up to the FDA. Though PSMA is widely expressed on prostate cancer cells, patients had to have confirmed PSMA positivity via a PET scan to be enrolled.

Dr Morris said his team had deliberately designed a simple screen, ruling in any PSMA-positive prostate cancer and ruling out patients with "significant" PSMA-negative disease. Around 90% of patients thus screened were allowed into the Vision trial.

He also stressed the study cohorts’ balance in use of Zytiga, Xtandi or Erleada pre-treatment as well as in post-protocol therapy, and in the post-protocol use of chemotherapy. “These results are really due to the lutetium as opposed to any pre- ... or post-treatment factor,” he told the press briefing.

If 177Lu-PSMA-617 still has much to prove to meet its full potential, investors will take the positive comments as support for the radioligand approach at long last. The space has recently seen a flurry of licensing deals, and today Bayer acquired the private company Noria Therapeutics for an undisclosed amount.

The business development divisions of Bayer and other asset purchasers will now also be breathing a little easier (Radiotherapeutics remain in the deal-making frame, March 31, 2021).

Radiotherapeutics remain in the deal-making frame

Lantheus has three shots on goal to challenge Novartis