Gilead has spent the past few weeks lowering expectations around the Tropics-02 trial, and the full data, unveiled in an Asco late-breaker today, show why. The 1.5-month median progression-free survival benefit achieved by Trodelvy over chemotherapy might be statistically significant, but it will be tough to argue that this represents a real breakthrough for these breast cancer patients.

The trial was known to have hit on PFS, and investors had initially been hoping to see at least a 2.5-month advantage, but assumptions tumbled after Gilead refused to say whether the result was clinically relevant. The group can contend that a 34% reduction in the risk of progression is meaningful, but a similarly weak showing on overall survival does not help its case.

The full Tropics-02 dataset will be presented at the conference later, but summary data being discussed at a press briefing this morning revealed median PFS of 5.5 months for Trodelvy and 4.0 months for the chemo patients (p=0.0003). With some analysts braced for the delta to fall below one month this result might actually not be as bad as some had feared.

The result was defended by reviewing physicians at an Asco press conference this morning, with Dr Jane Meisel of Emory School of Medicine, pointing out that three times as many patients in the Trodelvy arm were alive at 12 months, 21% vs 7% for chemo.

"That PFS may not seem clinically significant but it is important to look at those landmark analyses," she said. "Being able to offer someone with such heavily pre-treated disease an option that allows a one in five chance of not progressing at one year is still huge from a clinical perspective." 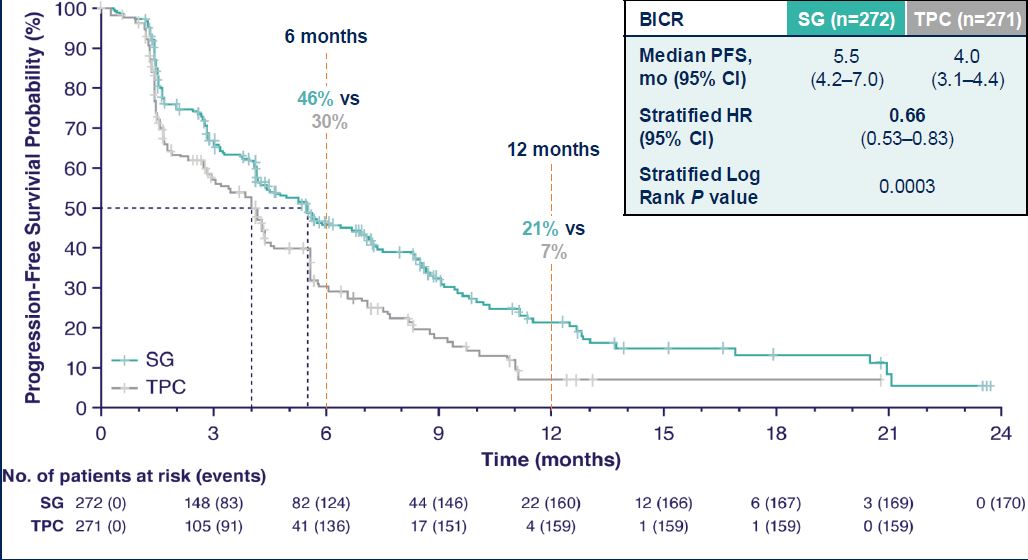 But this result is still much weaker than hoped, which can perhaps partly be explained by the control arm performing slightly better than expected. Other features of the data include a high level of patient censoring ahead of the medians – investigators pointed out that the trial enrolled due the Covid pandemic – while the survival curves suggest that Trodelvy needs to be better targeted at those with a higher chance of a strong response.

"The medians fail us to some degree when there’s a segment of patients who will progressive rapidly and you can't predict that," Dr Hope Rugo, the Tropics-02 lead investigator, told the Asco press conference.

On overall survival Trodelvy has also yet to make a mark, albeit in an immature dataset that could possibly improve over time. At this interim readout the Trodelvy arm generated 13.9 months of median OS versus 12.3 months for the chemo arm. Gilead had already admitted that OS was not significant, and a hazard ratio of 0.84 and p value of 0.143 reveals the extent of the miss.

Jefferies wrote recently that doctors they spoke to wanted to see a trend of at least a few months on overall survival to get optimistic. That has yet to emerge, which probably helps explain why Gilead has not said when it might file for approval on this data.

The official reviewer for Asco, Dr Veronique Dieras of Centre Eugène Marquis, also expressed reservations about the result. "Questions still to be answered before considering [Trodelvy] as an option in this population," she concluded.

Unfortunately for Gilead there is another twist in this tale. This is because of a potential overlap in the populations recruited for Tropics-02 and Destiny-Breast04, the latest Enhertu study that Daiichi Sankyo and Astrazeneca will unveil at Asco tomorrow.

But the definitions that lie behind Her2-negative in the former and Her2-low in the latter reveal an important overlap: both studies included tumours scored 1+ by immunohistochemistry, or IHC2+ with a negative in-situ hybridisation (ISH) score. Tropics-02 also included IHC 0 tumours.

This means that Enhertu's performance in ER-positive patients can be compared against the Trodelvy result, the normal caveats of cross-trial comparison notwithstanding.

The Tropics-02 data cut by IHC score is not yet available, Dr Rugo said. But she pointed out that 35% of hormone receptor positive breast cancers are Her2 negative.

If Enhertu performs as strongly as expected, this could be the niche left for Trodelvy in this setting. Astra and Daiichi have already said that both PFS and OS endpoints were hit and the trial has won a plenary presentation spot. It seems likely that Enhertu will redefine the way breast cancer hitherto deemed "Her2-negative" is treated.

There are of course important differences between the trials. Gilead insists that the Tropics-02 patients were more advanced and therefore represent a more challenging patient group. The two antibody-drug conjugates are also targeted differently – Enhertu at Her2 and Trodelvy at Trop-2.

But Gilead is apparently well aware of this threat. A $2.7bn impairment charge taken last quarter against the Immunomedics acquisition, the source of Trodelvy, was blamed on the potential for a delayed launch in the Tropics-02 setting and "the possibility of a reduced market share in late-line patients given the emerging competitive landscape".