39% of the patients assessed carried this biomarker, the conference presentation reveals.

Full results from Astellas’s Spotlight study of zolbetuximab have gone some way to answering the question of just how big an opportunity the targeting of Claudin18.2 could represent.

This is just one of several important details from Spotlight, whose initial promise was revealed yesterday, and whose full presentation took place last night at the Asco Gastrointestinal Cancers symposium. The findings will be important not just to Astellas but to companies including Transcenta, Biontech and Leap Thrapeutics, which have also placed bets on zolbetuximab’s mechanism of targeting the Claudin18.2 protein.

Spotlight tested a zolbetuximab/chemo combo in front-line gastric/gastroesophageal junction (GEJ) adenocarcinoma that was Her2-negative, and that also carried significant Claudin18.2 expression. But Claudin18.2 testing is not standard practice, and it was not immediately obvious how big a population this biomarker-defined niche could represent.

At Asco-GI investigators revealed that 2,244 patients had been assessed initially for Claudin18.2 expression, and 865 of these were deemed sufficiently positive (at the ≥75% Level, according to a Ventana assay) to be randomised into Spotlight. So the niche, at least in Her2-negative gastric/GEJ adenocarcinoma, amounts to 39% of patients.

Clearly, other cancers will carry differing Claudin18.2 expression levels. The next most-advanced anti-Claudin18.2 MAb after zolbetuximab, Transcenta’s osemitamab, is in phase 2 for Claudin18.2-positive biliary tract cancer, while Biontech’s BNT141 is being studied in various tumours that express Claudin18.2 at ≥50%.

Another headscratcher was that zolbetuximab’s efficacy seemed to be entirely driven by gastric cancer, where risk of death versus chemo alone was cut by 33%. In patients where GEJ was the primary cancer site, 136 of Spotlight’s 565-strong efficacy population, there was no efficacy at all, with a 1.07 hazard ratio, a subgroup analysis revealed yesterday.

The study did not throw up toxicity concerns beyond nausea, vomiting, hypokalaemia and hypoalbuminaemia, and the overall survival curves showed a somewhat late separation, hinting at the presence of as yet undetermined biomarkers. 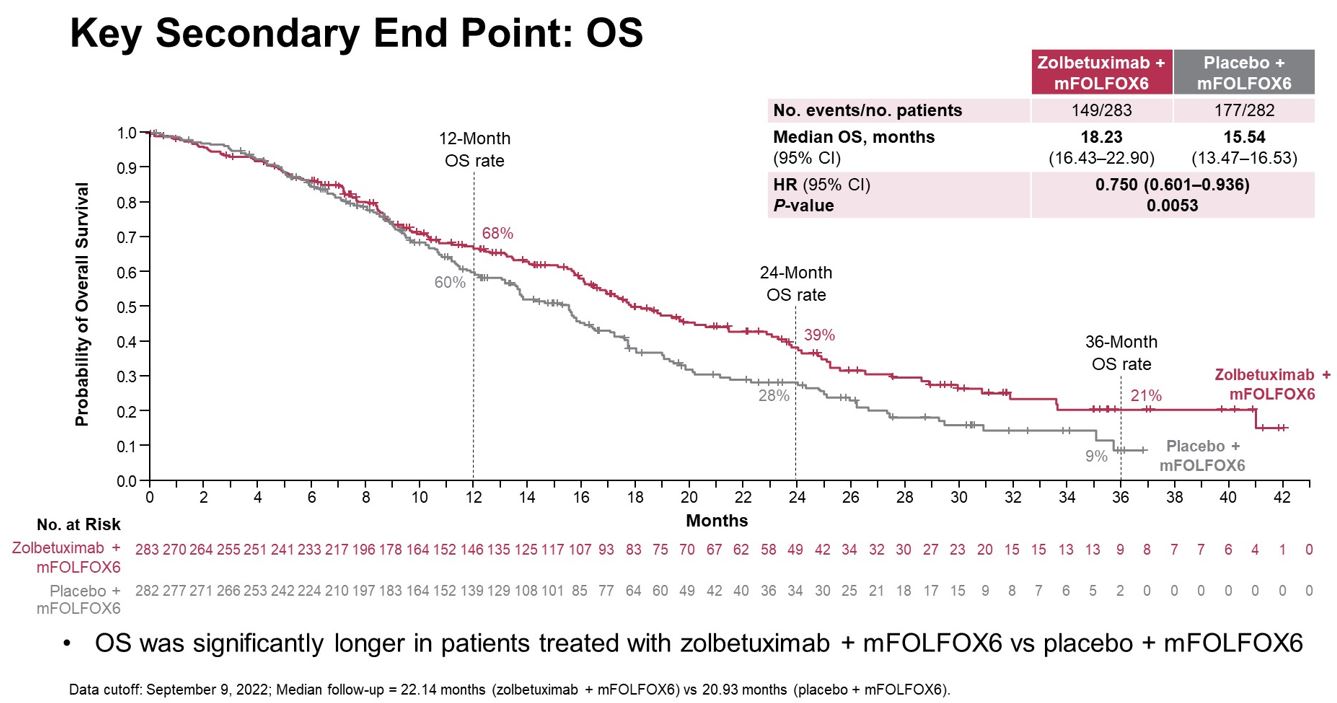 After the Spotlight late-breaker Asco-GI saw the results of the first interim analysis of Beigene’s Rationale-305 trial of tislelizumab plus chemo in the more typical setting of Her2-negative gastric/GEJ adenocarcinoma.

This study had enrolled patients irrespective of PD-L1 expression, but as the presentation was known to focus on PD-L1-positives it seemed likely that Rationale-305 had failed in all-comers. Not necessarily: the study schema revealed that the intention had always been to analyse ≥5% PD-L1 expressing patients first, and only if this was positive for OS would the result be tested in the intent-to-treat population.

Thanks to this sequential analysis Beigene was able to say the 0.0056 p value for the OS benefit in PD-L1-positive patients was statistically significant. OS in the all-comers set, to be presented at a later congress, will be tested at final analysis, which Beigene told Evaluate Vantage would happen later this year.