Investors had been awaiting an update on voxelotor with trepidation, but a lenient FDA has lit up the company’s Ash.

In the end, Global Blood Therapeutics’ big Ash reveal was a bit of an afterthought. But this was for all the right reasons: earlier this morning the group told investors that the US FDA had agreed to an accelerated approval pathway for its sickle cell disease candidate voxelotor.

This outcome had been far from certain since GBT ditched part B of its Hope trial, instead relying on haemoglobin data generated in part A. The FDA has apparently signalled its willingness to be flexible when it comes to underserved diseases and surrogate endpoints, and while GBT investors might be wise to wait for the meeting minutes from the agency before breaking out the bubbly they nevertheless sent the group’s stock up as much as 55% today.

GBT said it hoped to schedule a pre-NDA meeting with the agency in the first quarter of next year, at which point it will have more details on its confirmatory trial, and a better idea on timings for an eventual filing.

The company also said it planned to use transcranial doppler (TCD) flow velocity – an indicator of a patient’s risk of stroke – as the primary endpoint of the confirmatory study. Stroke is a known complication in sickle cell disease.

Notably, GBT has eschewed two endpoints that it had previously talked up: vaso-occlusive crises and patient-reported outcomes. In part B of Hope the company had intended to use one of these measures as a key secondary endpoint, but it abandoned this phase of the study in June (Global Blood launches bold bid for early sickle cell approval, June 27, 2018).

Longer-term data from part A of Hope, presented today at Ash, might provide some clues about the reasoning behind this decision. GBT finally reported detailed VOC data which, as the company previously said, only showed a numerical reduction in events with voxelotor. On the surface the numbers might have looked disappointing, but Dr Elliott Vichinsky of the UCSF Benioff Children's Hospital, presenting the results, pointed to a very low rate of VOC at baseline. 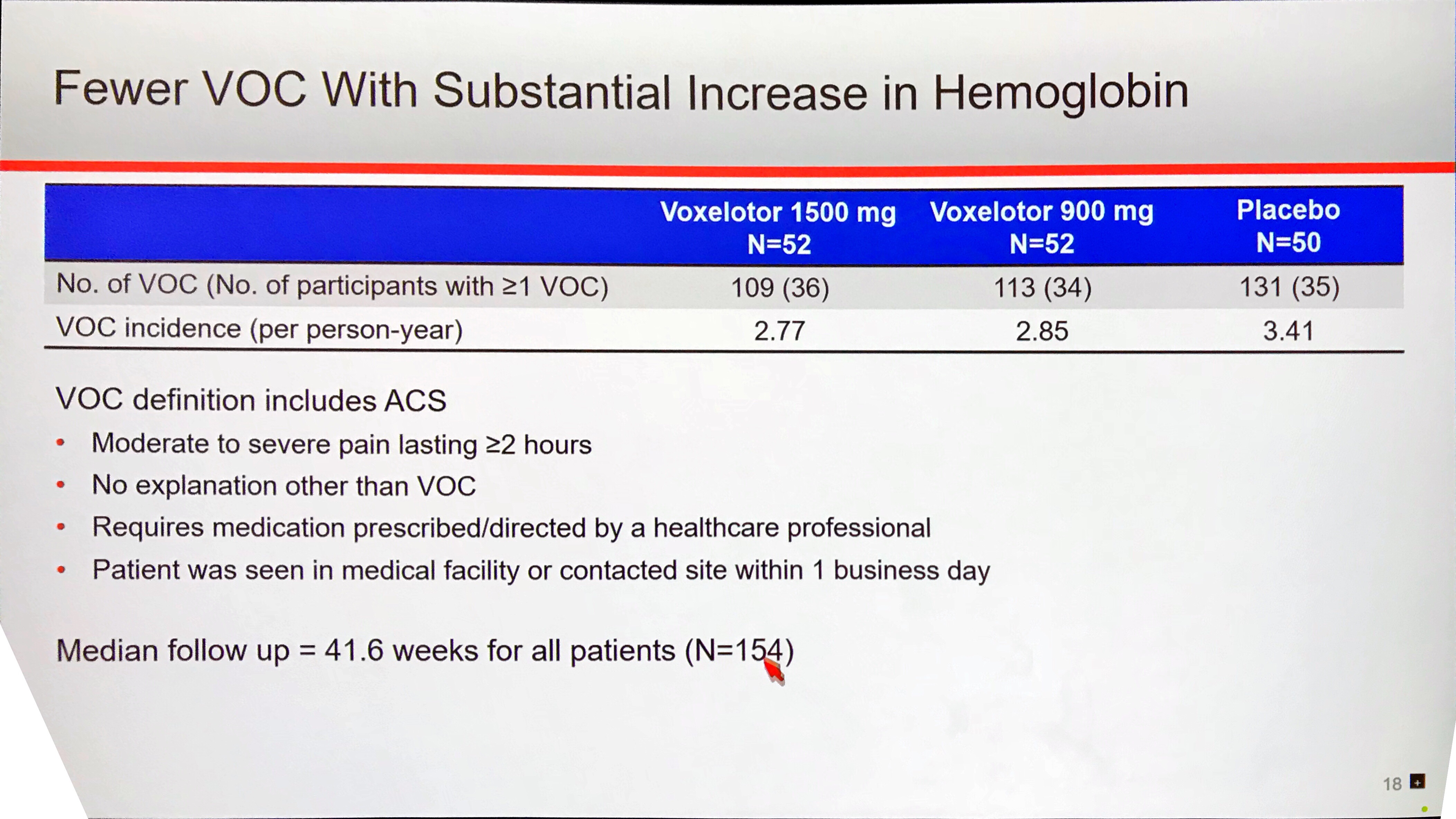 As for the patient-reported outcomes tool, GBT’s chief executive, Ted Love, admitted on a conference call this morning that this had not worked, adding that the FDA had agreed that the data on this measure were “uninterpretable”.

The relevance of this might no longer matter. GBT has long kept the faith that showing a benefit on haemoglobin levels would be enough for accelerated approval. The news today appears to support this stance, and longer-term data on haemoglobin at Ash will only strengthen the company’s case.

There is still more to come from Hope A. The initial analysis in June, plus today’s update, included only the first 154 patients from the trial, but the study has enrolled a total of 270 patients in total; full data are expected early next year.

GBT execs said on this morning’s conference call that the likelihood of these additional patients changing the ultimate outcome was low. Instead, safety will be the main consideration here.

European regulators might be stricter – GBT plans to turn its attention to the EU next year. But at least in the US, with the FDA still in a lenient mood, perhaps only a major safety scare could trip up the company now.