With Bluebird missing the deadline for getting its registrational Karmma dataset into the Ash conference, the way was left clear for Johnson & Johnson to seize the early spotlight. Today’s Ash presentation of the first human data with J&J’s anti-BCMA Car-T project JNJ-4528 has shown a staggering 100% remission rate.

Bluebird/Bristol-Myers Squibb did unveil the Karmma data yesterday, but only by press release. The results certainly seem good enough to secure approval for ide-cel/bb2121 in late-line multiple myeloma, but relapses remain the elephant in the room, and care has to be taken when attempting cross-study comparisons owing to differing patient characteristics.

In Karmma, for instance, all 128 treated subjects had failed at least three therapy lines, and 84% were triple-refractory. The key efficacy data – a 73.4% overall response rate, including 31.3% complete remissions – look reasonable compared with the 77% ORR (31% CR) rates seen in the earlier study of bb2121 in subjects who had failed an average seven prior therapies.

However, the worry is relapses: remissions in Karmma lasted only 10.6 months on average, and median progression-free survival was 8.6 months. Against such a backdrop, the threat of J&J’s JNJ-4528 in what is already a highly competitive field has suddenly become real.

At Ash today J&J said its Cartitude-1 trial of JNJ-4528 had so far treated 29 subjects, 86% of whom were triple-refractory, and 31% of whom were penta-refractory. All patients responded to JNJ-4528, an amazing 69% showing complete remission or better. 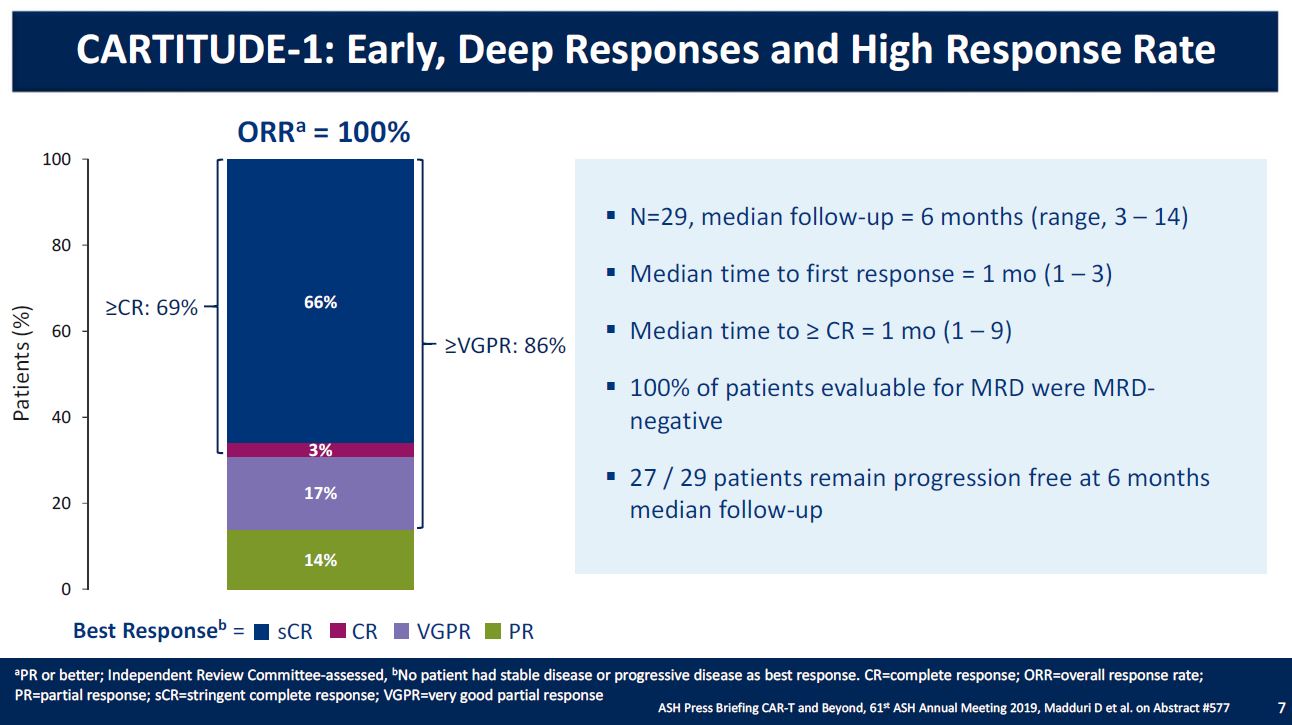 Followers of J&J will thus breathe a sigh of relief. The company had licensed JNJ-4528, a bispecific Car against two different epitopes on the BCMA protein, from Nanjing Legend, a subsidiary of China’s Genscript Biotech, for $350m up front, but Legend’s own data have since then drawn criticism (Ash 2018 – Legend’s mystery CAR raises more questions, December 3, 2018).

Cartitude-1’s presenting author, Dr Deepu Madduri of Mount Sinai Medical Center, suggested preferential expansion of CD8+ central memory T cells as one reason behind JNJ-4528’s impressive efficacy. That said, the real test is durability, and here it is early days: 27 of the 29 subjects are progression free at a median six months’ follow-up.

It will not go unnoticed that Cartitude-1 and Karmma each featured a report of a patient death owing to cytokine release syndrome. This might be surprising given the prevailing view that this Car-T-related side effect is now largely controllable.

As an interesting aside, Legend is still running its own Chinese study, Legend-2, and will update the results at Ash on Monday. It continues to call its project LCAR-B38M; this is identical to JNJ-4528, though J&J has previously told Vantage that it uses different manufacturing and scale-up processes.

And a separate Car-T asset against multiple myeloma was unveiled at Ash today by another Chinese group, Cellyan Therapeutics. This targets BCMA and CD38, and yielded a 90.9% ORR, with 12 CRs, in 22 multiple myeloma subjects who had failed two to nine prior therapies.

15 of 20 responses were ongoing at 12-72 weeks, said Huazhong University of Science and Technology’s Dr Heng Mei. However, given the differing standards of treatment, any prospective western partner for this project would be well advised to run a confirmatory study in the US – as J&J is doing with JNJ-4528.

So where does this all leave Bluebird and Bristol? For investors ide-cel is an important consideration because it is one of three elements of the contingent value right that Bristol issued when it bought Celgene, Bluebird’s original partner.

The CVR will be triggered if, among other things, ide-cel is approved in the US by 31 March 2021. On the strength of Karmma this is certainly looks achievable, and a filing based on this dataset looks likely to go ahead imminently.

The broader question is how big ide-cel could turn out to be, and unfortunately for Bluebird Karmma provides little solace. A potent though short-lived therapy offers little hope of expanding ide-cel into earlier lines of therapy.

And bb21217, which Bluebird had played up as a potentially improved version of ide-cel, actually looks little better, according to its Ash abstract. Attention now turns to Bristol’s bispecific anti-BCMA MAb CC-93269, whose first clinical data presented at Ash today have impressed.

Ide-cel kicked off the BCMA revolution in multiple meyloma, but by the time this year’s instalment of Ash is over it might look remarkably vulnerable.

Ash 2019 – for Car-T the bispecific antibody threat is real