Data presented at Ash today did little to assuage concerns that the efficacy of Pfizer and Sangamo’s haemophilia A gene therapy candidate giroctocogene fitelparvovec might be waning. In fact, giroctocogene fitelparvovec, previously known as SB-525, looks to have run into the same lack of durability that has affected Biomarin’s rival project valrox.

Today's data drop included details on factor VIII levels at one year in all five patients in the highest-dose cohort of the phase I/II Alta trial. The companies pointed to mean FVIII activity of 70% from week nine to 52, but a look at individual patients' FVIII levels over time showed these falling away quite dramatically in some subjects. In addition, a bleed was seen during year two.

Asked to comment on the drop-off in FVIII levels, the University of California's Dr Andrew Leavitt, who presented the data at Ash today, said the issue of durability was "certainly the major question in this field".

He added: "The variability we see in these five patients is in keeping with some other observations." Perhaps this referred to the valrox data, but he declined to speculate on the potential reasons behind waning FVIII levels. 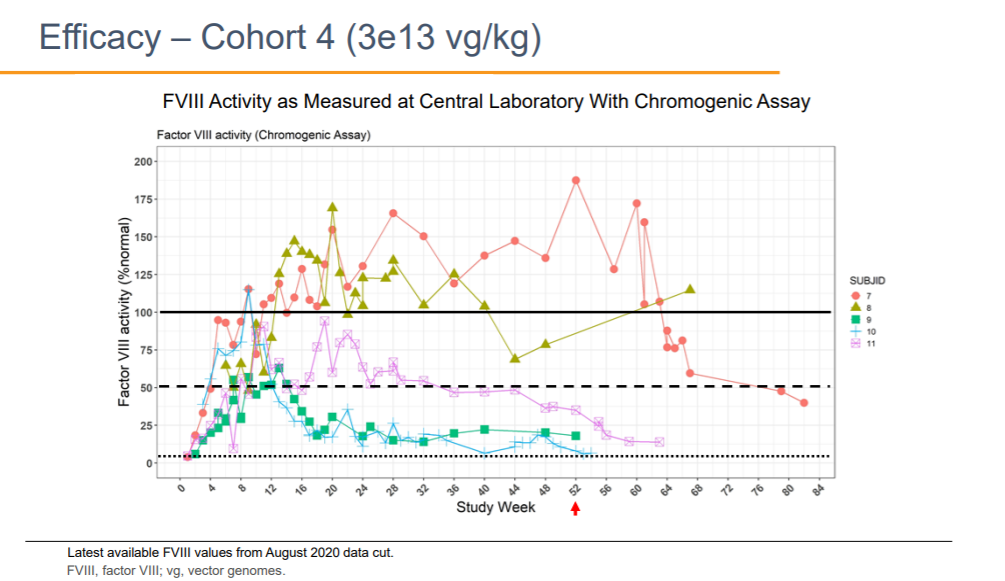 Sangamo has long said that its project might have improved durability versus valrox, but this claim is now on shaky ground – a possibility first raised in September when one-year data from four high-dose giroctocogene fitelparvovec patients were presented at Pfizer’s R&D day (Are the stars waning for Pfizer’s haemophilia A gene therapy?, September 16, 2020).

It is worth remembering that, at one year, Biomarin’s project showed mean and median FVIII levels of 64% and 60% respectively, as per the chromogenic assay – the same type of test used in Alta – before fading in subsequent years.

Longer-term data on giroctocogene fitelparvovec will be needed before a definitive call can be made on durability, but some investors are not hanging around to find out: Sangamo’s stock fell as much as 8% on Monday morning.

It might be a while until the next update: the companies plan to present data when all five high-dose patients have been followed for at least two years. Meanwhile, Pfizer, which has responsibility for phase III, dosed the first patient in giroctocogene fitelparvovec’s pivotal trial, Affine, in October.

This story has been updated to include comments from Dr Andrew Leavitt during the Ash presentation.