IGM Biosciences’ IGM-2323 has shown a partial remission at last, a presentation at the Ash conference revealed today. This is positive in a way, but unfortunately for the company this is where the good news at Ash ended.

The disease in question, late-line CD20-positive lymphoma, frequently yields much higher response rates with rival therapies, and IGM-2323 is the first test of the technology platform that underlies IGM’s investment case. The company is capitalised at $1.9bn, but looks like it will be worth a lot less when the markets open on Monday.

It cannot be denied that the technology approach is scientifically neat: IGM has long argued that IgM antibodies offer the promise of higher affinity and avidity than the simpler, standard IgG format. Unfortunately the clinical data have yet to bear this out.

IGM-2323, an anti-CD20 bispecific T-cell engager, is the company’s first IgM construct. Last month the Ash abstract detailing its phase I study described eight lymphoma subjects treated at a low dose, with no remissions at the early data cutoff; the stock fell 7%, but had since recovered.

More mature data, revealed today, cite 16 patients treated, of whom 14 were evaluable. Dr Elizabeth Budde, of City of Hope National Medical Center, told Ash that nine of these had shown evidence of tumour reduction, but only two had reported what she termed partial responses.

However, one of the responses appeared extremely marginal in terms of tumour size reduction from baseline, the Ash data showed. At present the assessment has been carried out by the investigator alone, using the Lugano criteria that are standard for lymphoma. 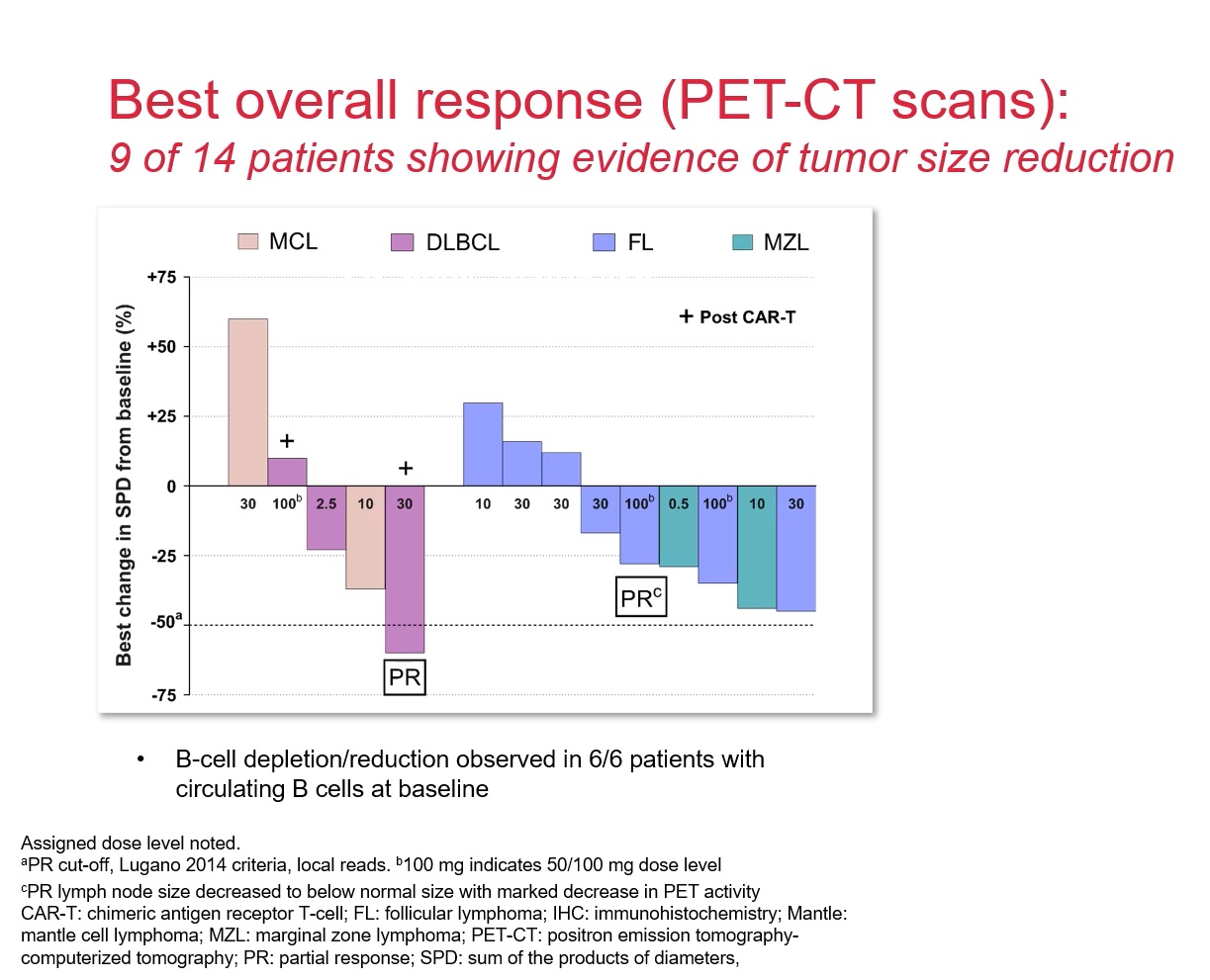 One partial remission occurred with a 30mg dose of IGM-2323, while the other was with the antibody titrated up to 100mg. The study’s dose-escalation design calls for two higher doses to be tested: 300mg and 1,000mg.

The company went further, detailing an update beyond the October 30 data cut used for the Ash presentation. This showed that the marginal PR had now turned into a complete response, and there was an additional CR in a subject who had initially had a 35% lesion size reduction, and IGM strongly played up these deepening responses.

Is this enough to move the needle for IGM in the anti-CD20 arena? The space is, after all, awash with treatment approaches, from naked antibodies through bispecifics and conjugates to Car-T.

And whether the IgM approach has legs anywhere else, and whether it is anything other than a scientific curiosity, are broader questions investors will be grappling with on Monday.

This story has been updated to reflect issues discussed at IGM's investor update.