One of the barely believable statistics of this year’s Ash conference is that its sessions comprise data on 29 different projects targeting the BCMA antigen. But what about novel targets that might either be less crowded competitively or whose targeting could treat multiple myeloma that has relapsed after BCMA therapy?

Saturday saw promising clinical results unveiled from two projects that have largely flown under the radar, Johnson & Johnson/Genmab’s talquetamab and Roche’s cevostamab. These impressed with their data and competitive positions alike: the latter’s pharmacology is unique, while the former has just one potential rival with the same mechanism.

Talquetamab is a bispecific against the GPRC5D antigen, a plasma cell target that caused a ripple of interest at Ash two years ago, courtesy of Memorial Sloan Kettering’s Car-T asset MCARH109. GPRC5D expression was said to be independent of BCMA, and MCARH109 has recently entered phase I.

This year talquetamab backed up the promise of GPRC5D with data from a dose-escalation trial that has now treated 157 patients who had received a median six prior therapies.

Dr Ajai Chari of Mount Sinai Medical Center dismissed the lowest doses as inactive, but focused on 50 evaluable subjects given over 20µg/kg, in whom the response rate was 66%. He zeroed in on 13 patients who had received 405µg/kg subcutaneously, which has been set as the phase II dose, and where the ORR was 69%.

Dr Chari had tested IV and SC administration, and while both caused cytokine release syndrome only IV was associated with this toxicity above grade 2; an 800µg/kg dose caused grade 3 rash and will not be taken forward. Across all patients 27 had progressed on anti-BCMA therapy, but Dr Chari said numbers were too small to comment on their remission rates.

Not so for Roche’s cevostamab (RG6160), an anti-FcRH5 bispecific whose phase I trial has now treated 53 subjects. Five of eight who had progressed on anti-BCMA therapy went into remission, Dr Adam Cohen of University of Pennsylvania told Ash.

Similarly to talquetamab’s dose-escalation trial, low doses of cevostamab were ineffective, but among 34 subjects who got 3.6mg/20mg or more of the Roche MAb the ORR was 53%. Cytokine release syndrome was seen in 76% of patients, but only one subject had this above grade 2, and Dr Cohen said step-up dosing effectively mitigated the risk.

He declared that the data established FcRH5 as a novel target in multiple myeloma. According to EvaluatePharma there are no other industry projects targeting this protein in development – at least not yet. 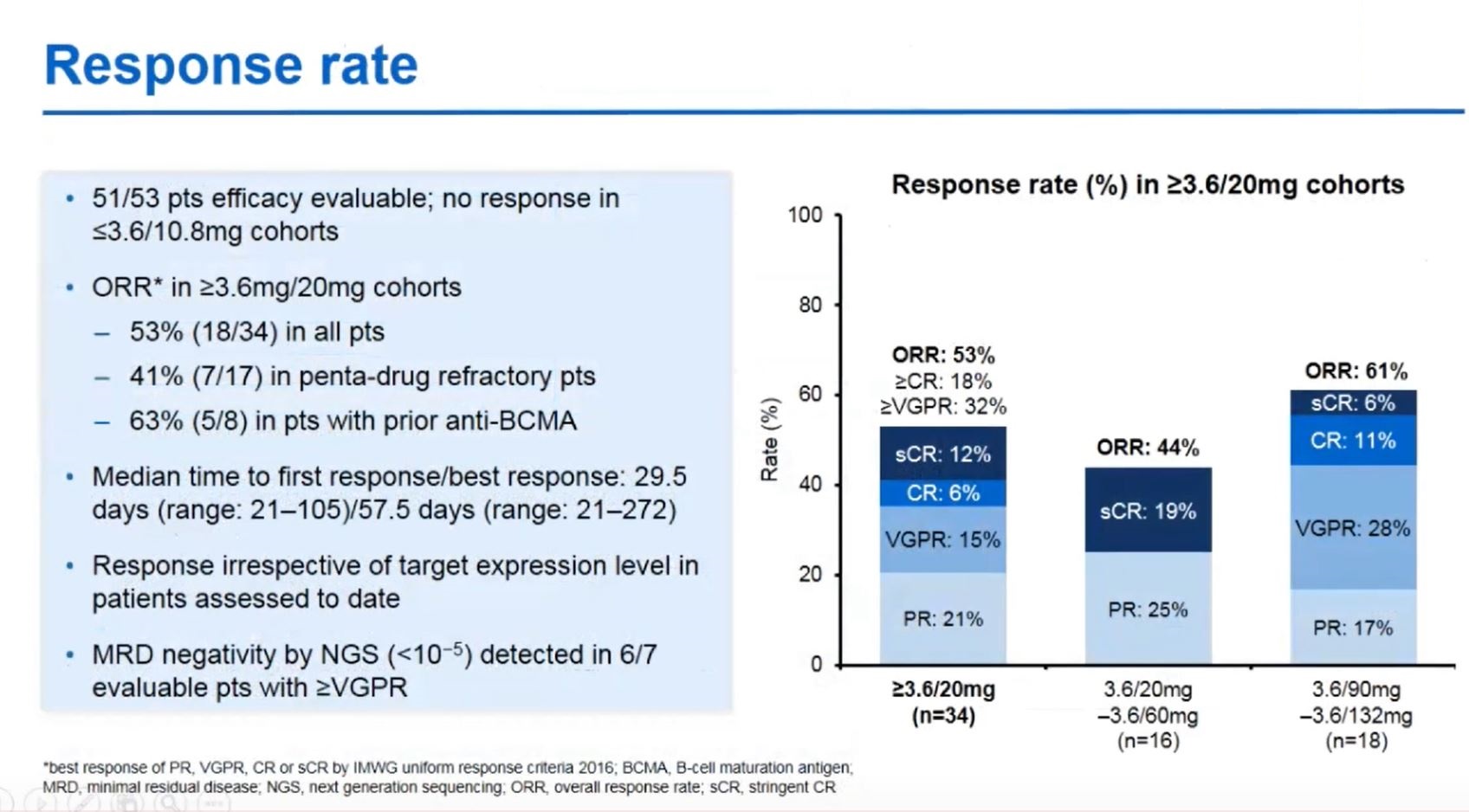