Results with Loxo-305 could justify Lilly’s acquisition of Loxo, but its inventor, the UK’s Redx, can just read ‘em and weep.

Success comes rarely to UK biotech, so when something as momentous as the data just reported at Ash with Loxo-305 happens it deserves to be celebrated. However, through a bizarre set of circumstances the UK no longer has any stake in Loxo-305 – even though the project was invented in England.

Loxo-305 had been originated by Redx Pharma, but was sold off with no royalty obligation to Loxo for just $40m, before Loxo got bought by Lilly. As a non-covalent BTK inhibitor it now rivals Arqule’s ARQ 531, and investors will be well aware that based on a much smaller dataset Arqule was sold to Merck & Co for $2.7bn.

The Ash results are the first glimpse at Loxo-305’s Bruin trial since a year ago, when the dataset comprised just 13 chronic lymphoblastic leukaemia (CLL) and eight lymphoma subjects. It now includes 139 evaluable CLL patients, detailed today, while a 56-strong cohort in mantle cell lymphoma was presented on Saturday.

A key reason for developing non-covalent BTK inhibitors is that patients given the covalent variety like Imbruvica can relapse via the C481S mutation. This had been the pitch for ARQ 531, which yielded remissions in seven of eight C481S mutants before Merck pulled the acquisition trigger.

The case for Loxo-305 is broader, however, encompassing mutants and wild-type subjects alike, as well as those who have relapsed for unknown reasons. 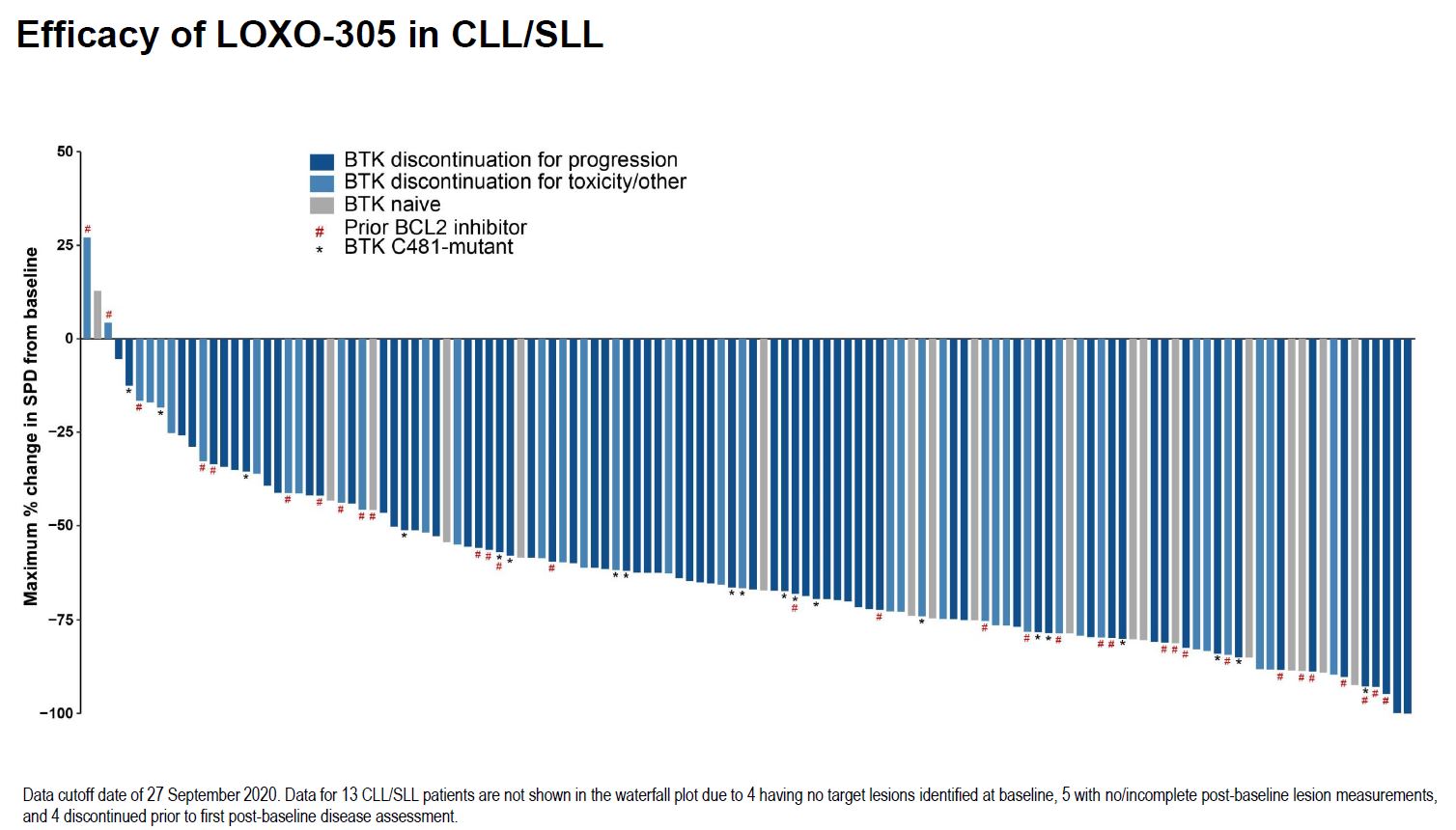 Saturday’s lymphoma cohort showed a 52% ORR in all-comers and in the 52 post-BTK patients alike. There is no analysis for the C481S mutation here, as it is rare in lymphoma.

This raises an obvious question: how do patients relapse if not via C481S? Lilly’s hypothesis is that this is due to pharmacology failure.

“A key differentiating feature of Loxo-305, in addition to the fact it doesn’t bind covalently, is that the pharmacology of the drug is excellent; there is very high oral exposure,” Jacob Van Naarden, chief operating officer at Lilly’s Loxo division, told Evaluate Vantage.

He reckons Loxo-305's only real competitor is ARQ 531, which “has a very narrow therapeutic index and is not really a selective kinase inhibitor; I feel confident about our standing relative to that drug”.

It has yet to be determined how much data Lilly needs to take Loxo-305 to regulators. The plan is to gun for late-stage approval first before challenging covalent BTKs broadly, and to this end a randomised programme going head to head against approved BTK inhibitors is to start next year.

Cherry on the cake

The sellside should take heart in today’s data, since it had previously not assigned any value to Loxo-305. Indeed, Lilly’s takeout of Loxo for $8bn was predicated on the drug now approved as Retevmo, which carries an NPV of just $4.7bn, according to EvaluatePharma’s calculation of sellside forecasts.

“The Loxo-305 package that’s emerging is the cherry on top that really makes the deal pay for itself,” said Mr Van Naarden, who of course had sat on the Loxo side of that January 2019 transaction.

Non-covalent BTK competition includes Aptose, which yesterday presented nothing beyond case reports with CG-806, while Sunesis, whose vecabrutinib had failed to register any remissions, has now been reverse merged into Viracta Therapeutics. There has been no update with ARQ 531, which Merck now calls MK-1026, since that small dataset a year ago.

Perhaps the cruellest twist is the one suffered by UK biotech. Loxo-305’s inventor, Redx, had been put into administration when a local UK authority, Liverpool City Council, called in an infrastructure loan of just £2m ($2.6m) after the company moved its headquarters out of the region.

With the administrator keen to make a quick sale to keep the business afloat, rights to the molecule were relinquished for just $40m with no future strings attached.

Today Mr Van Naarden pays tribute to the inventors, saying they “should be proud of this. They built a nice molecule, their names are on the patents, and for their careers they can take some solace in knowing that this drug is helping people.”

But UK biotech frequently bemoans the scant benefit it derives from homegrown successes like Shire, or Cambridge Antibody Technology’s involvement in discovering Humira. The fact that – in scarcely believable circumstances – a local company let go for $40m a drug that today could be worth billions is a bitter pill indeed.