While Atara got bogged down in delays to its lead project, Tab-cel, and transformation into a Car-T company, its cell therapy approach to progressive multiple sclerosis took something of a back seat. But work continues, and recent results have backed the selection of a dose with enough efficacy to take forward.

The data presented at the virtual European Academy of Neurology this week in a late-breaking abstract went live on Friday. While multiple sclerosis might be a secondary consideration, some investors have not lost faith: Atara stock had run up 50% this week into last week's EAN abstract drop.

The latest results relate to ATA188, an allogeneic cell therapy on which Atara is now pining its multiple sclerosis hopes. The group also has an autologous MS project, ATA190, but this has been deprioritised.

The dose-finding part of ATA188’s phase I trial has yielded data for the first time from a high dose of 20 million cells. At 12 months two of six subjects in this cohort showed clinical improvement, as defined by the Expanded Disability Status Scale (EDSS), the just unveiled EAN poster reveals.

Showing improvement suggests that patients are not just experiencing a slowing of their disease, and is especially important in progressive MS, which is still relatively intractable, though Roche’s Ocrevus is making important inroads in treatment.

“Halting disease is transformational; reversing disease is even better,” AJ Joshi, Atara’s head of clinical development, told Evaluate Vantage. Across all subjects in the four cohorts there were two deteriorations on EDSS score; all the rest either improved or were stable, Atara told an investor call today.

ATA188 comprises donor T cells that have been sensitised against Epstein Barr virus (EBV) antigens, and HLA typed so they can be matched to recipients. Atara argues that they can recognise and eliminate EBV-infected B cells, and the involvement of EBV in MS has been put forward by Dr Michael Pender, at the University of Queensland, Australia.

The first clinical safety data with ATA188 had been released a year ago, and last September at the Ectrims meeting Atara presented six-month efficacy results at the first two cohorts, showing the first hints of activity.

At EAN those findings were updated, showing one EDSS improvement only in the five million cell cohort, and none in subjects given 10 million cells.

There is a further cohort in the study, 40 million cells, and so far two of six subjects here are showing EDSS improvement. However, this is only at six months, and has yet to be confirmed with a 12-month reading.

Based on a modified score, a composite of measures including EDSS, Atara has decided to take the cohort 3 dose into the next, randomised and placebo-controlled, stage of the study. But Mr Joshi said the trial’s adaptive design retained the possibility of adding to this the cohort 4 dose too, if subsequent data suggested a benefit.

“We’re ready to make that switch; there’s no [toxicity] signal at all,” said Mr Joshi. The next stage of Atara’s ATA188 trial will see an initial 36 subjects recruited some time next year, and have a 12-month readout looking at various measures in addition to EDSS, including lumbar puncture data.

In 2018 results of an ATA190 study were announced in which three of 10 participants experienced clinical improvement as measured by decreased EDSS scores. But Mr Joshi stressed that this was in a less robust investigator-initiated trial, and only comprised an initial, six-month reading.

And whether an autologous therapy like ATA190 had a future was a separate question. “Allogeneic is clearly the way to go in a large space like MS,” said Mr Joshi. 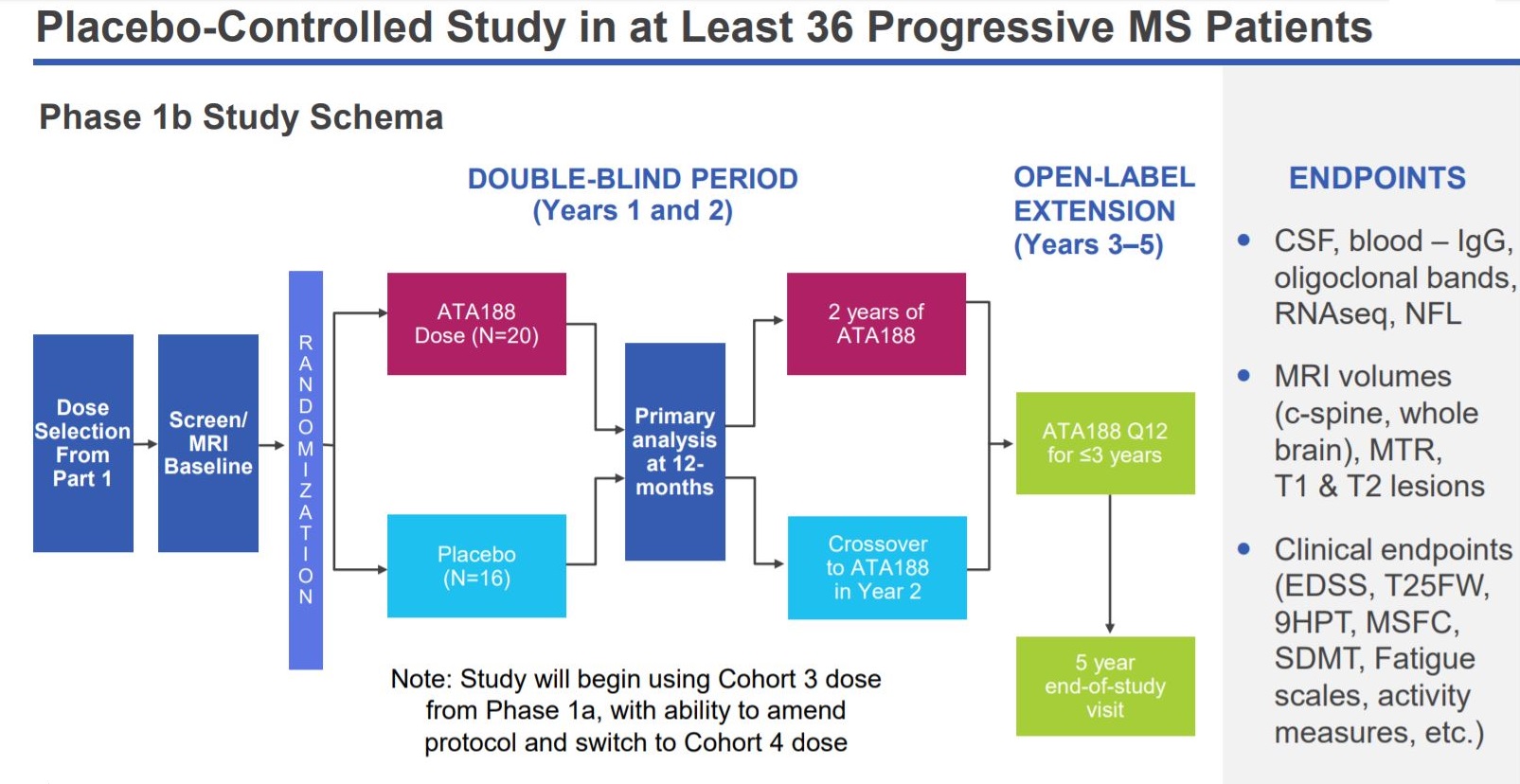 This is an updated version of a story that first appeared on Friday.