Presentations from Assembly Biosciences and Spring Bank Pharmaceuticals could disappoint those hoping to see more definitive steps towards a functional cure for hepatitis B.

Updates from the hepatitis B field at the EASL conference this year underlined just how much more of a challenge this virus presents compared with hepatitis C. Progress is being made towards a hep B cure, but is unlikely to unfold quite as dramatically as it did with hep C, as presentations from Assembly Biosciences and Spring Bank showed.

Fresh data from Assembly are likely to disappoint those hoping to see more definitive progress. The company's core protein modifier ABI-H0731 has yet to show any reduction in surface antigen, a marker that can indicate whether a patient is on the way to a cure. Separately, Spring Bank’s immune booster inarigivir caused some head-scratching over dose response.

Ironically, perhaps the most dramatic results came from a trial that combined Hepatera/Myr Pharma’s viral entry inhibitor Myrcludex with interferon. The need for this old drug with toxicity issues might dismay those hoping for progress with novel mechanisms, yet the companies presented evidence of functional cures in very hard-to-treat patients with hepatitis B and D co-infection.

Taking with one hand...

First to Assembly, though, which presented interim data from two ongoing phase II studies of ABI-H0731. Data from a handful of subjects treated for 24 weeks were shown for the first time, and investors had hoped that by this stage an impact on surface antigen, or HBsAg, would be seen.

For a patient to achieve a functional cure viral DNA and HBsAg must be suppressed, as the hep B virus needs both to trigger rebound infections. However, ultimately the virus's life source is believed to be cccDNA, a minichromosome that it deposits in liver cells.

Researchers believe that if viral DNA, RNA and HBsAG is suppressed for long enough cccDNA will start to decay and a functional cure will be achieved. Integrated viral DNA is likely to remain, however, though this is not thought capable of reviving an infection, hence the use of the term “functional cure”.

Nucleoside analogues (nucs) like Gilead’s Vemlidy can suppress DNA effectively while patients remain on therapy, though they are rarely able to clear HBsAg. Hence the search for new mechanisms to use in combination with a nuc backbone.

Encouragingly, Assembly presented data showing a dramatic loss of viral DNA in a small group of patients; 11 patients had been treated out to 24 weeks, and are presumably the subject of the slide below. No other group has managed to show a reduction in viral DNA to below detectable levels, according to Dr Jacob Lalezari, presenter of the study at EASL; Dr Lalezari was involved in the studies and acts as a consultant for Assembly.

He predicted that declines in surface antigen should follow. “We still need to drive RNA lower, then what will follow is decay of cccDNA, and then we will see those surface antigens disappear,” he said.

Describing the data as early but encouraging, he believes that the project is moving in the right direction. However, many investors were hoping to see much clearer evidence of ABI-H0731’s activity on HBsAG. Presentation of the full data, probably at AASLD later this year, is now a huge event for the company.

Spring Bank, meanwhile, is focusing on a different mechanism with inarigivir, an immune system booster that works by activating Rig-1. The company was at EASL presenting full results from the phase II Achieve study, which included a first proper look at the highest 200mg dose.

Although this higher dose promoted much stronger reductions in HBV DNA than lower doses, on other measures such as HBV RNA the dose response was less clear. HBsAg loss was also detected in more patients given the lower dose, which the company suggested might be explained by varying responses to different hepatitis B genotypes.

This jury is certainly still out on inarigivir, and will probably remain so until two large phase IIb studies testing a higher 400mg dose report, sometime next year. The fact that Gilead is sponsoring a phase II trial in combination with Vemlidy is something of a vote of confidence in the project. That could report later this year, and the fate of inarigivir arguably rests in any decision the big biotech makes after it sees the data. 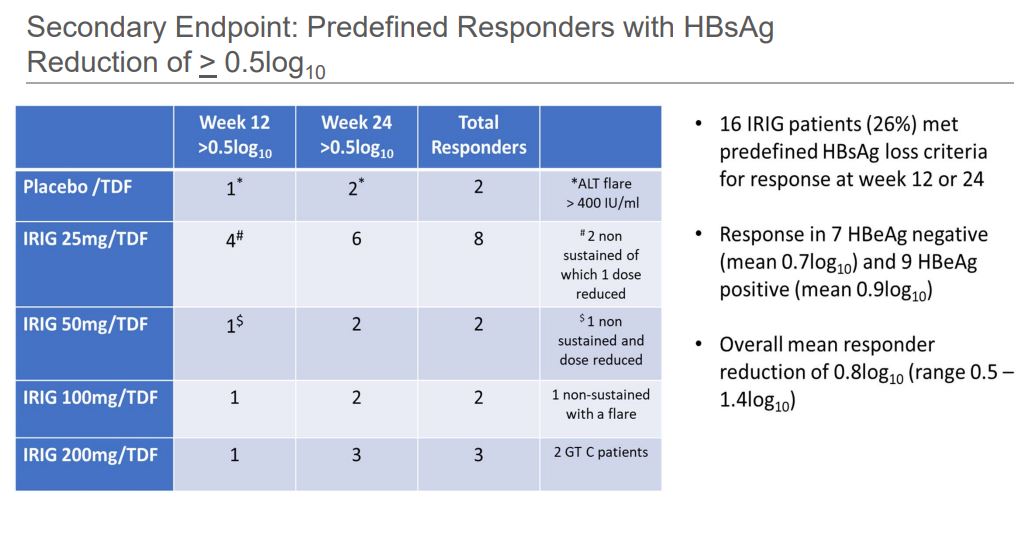 Finally, Myr Pharma showed highly encouraging data in co-infected patients; a prior infection with hep B is necessary to contract hep D, which rarely responds to antiviral treatment. As well as leaving 40% of patients with undetectable hep D virus at 72 weeks, 27% of patients had undetectable HBsAg, suggesting the combination is acting on both viruses, a very unexpected and encouraging finding.

Red flags include the fact that the trial was conducted in Russia, and an apparent lack of dose response, with the lowest dose apparently having a disproportionate effect. However the data impressed doctors at the conference.

“[Interferon] is not something we are trying to increasingly incorporate in our treatment regimens, but if it turns out to be a necessary component, there are worse things to have,” Professor Markus Peck-Radosavljevic, a hepatologist at Klinikum Klagenfurt in Austria, told Vantage. “And it’s still a big advance over not having anything [for hepatitis D].”

Dr Heiner Wedemeyer, who presented the Myrcludex data at EASL, suggested that the therapy could also be curative for hepatitis B alone, and said that Myr intends to investigate this. However, in this setting any need for an interferon backbone could make this a non-starter, given progress elsewhere, though this project has at least shown it is worth following.

Other mechanisms like RNAi were also on show at EASL. An update on previously presented data from Johnson & Johnson/Arrowhead’s JNJ-3989 showed very deep HBsAg reductions in a big proportion of patients, although the presence of rebounds when therapy was withdrawn highlights that much work needs to be done to find optimum regimens.

“The more you learn about hep B, the harder it looks,” Anuj Gaggar, vice-president of Gilead’s liver disease therapeutic area, told Vantage. “We have a lot of important data sets coming in the next year, internally and externally, and they will determine what happens next. Our hope is in the next five years we can get something out there [to start to offer a cure].”

Investors hoping to ride the next hepatitis wave will be hoping for success stories much sooner. However, the data at EASL suggest that progress in hep B will look more like a gently rising tide.

Looking for new mechanisms to cure hepatitis B

EASL 2020 – Assembly finds a partner as hepatitis B inches forward