A key update confirms ARQ 531 as the leading contender to treat patients who relapse on Imbruvica or Calquence.

Arqule’s C-suite should be fielding some pretty important phonecalls today. The group’s updated results from an early trial of the BTK inhibitor ARQ 531 show that its earlier success in just one subject was no fluke, and put it squarely in the takeover frame.

Given that the data show the clearest evidence yet of activity in patients who relapse on first-generation BTK inhibitors like Imbruvica or Calquence, Abbvie, Johnson & Johnson and Astrazeneca must be seen as the most obvious potential buyers. Of course, there are other players in this nascent follow-on BTK inhibitor field, one of which, Sunesis, is set to present a key update of its own tomorrow.

Arqule’s data, revealed today at the European Hematology Association meeting, mark a remarkable turnaround for Arqule, whose stock had been mired in a slump for years, but which opened up 40%. The results were especially unexpected as the group’s EHA abstract had revealed nothing beyond what was already known.

In the event Arqule was able to boast partial responses in five of 15 chronic lymphoblastic leukaemia/lymphoma subjects dosed at 65mg daily. But the crux of the update was the result in six patients at this dose who harboured the C481S resistance mutation: a highly impressive 67% partial remission rate.

This is an important advance on the single partial response seen in the first C481S subject in March, which might have been down to luck (Imbruvica resistance provides early but fertile development ground, March 14, 2019).

The EHA data confirm that the effect is real, and back the rationale behind ARQ 531, a non-covalent and reversible BTK inhibitor, specifically in patients who relapse on Imbruvica or Calquence with the C481S mutation.

And, while the initial thinking was that ARQ 531 would be used in patients who progress on such first-generation covalent BTK inhibitors, the expectation is that in time all patients will be started on a non-covalent drug like Arqule’s, said the study’s lead author, Dr Jennifer Woyach, of Ohio State University.

If this is the case then Abbvie should pay particularly close attention to these data. In 2015 Abbvie had paid $21bn for Pharmacyclics to get its hands on 50% of the interest in Imbruvica. If Imbruvica’s position might in future be challenged the company will want to stay ahead of the curve.

While Arqule’s $1bn valuation makes it an affordable acquisition target for big biopharma it is not the only non-covalent BTK inhibitor game in town. Sunesis is developing vecabrutinib, for instance, and while it has yet to report any clinical responses it will present an update at EHA tomorrow.

The next stage for Arqule will be to determine the optimal ARQ 531 dose, and to investigate the project’s potential beyond C481S mutants. In the EHA study there was a one response in a patient without a confirmed C481S mutation who had Richter’s transformation, a very aggressive lymphoma.

The most common serious adverse events were decreased neutrophil count and anaemia, and one subject discontinued after developing a sudden treatment-related rash. However, all six remissions were ongoing at the May 10 data cut-off, and Dr Woyach said she was pleasantly surprised by ARQ 531’s safety profile. 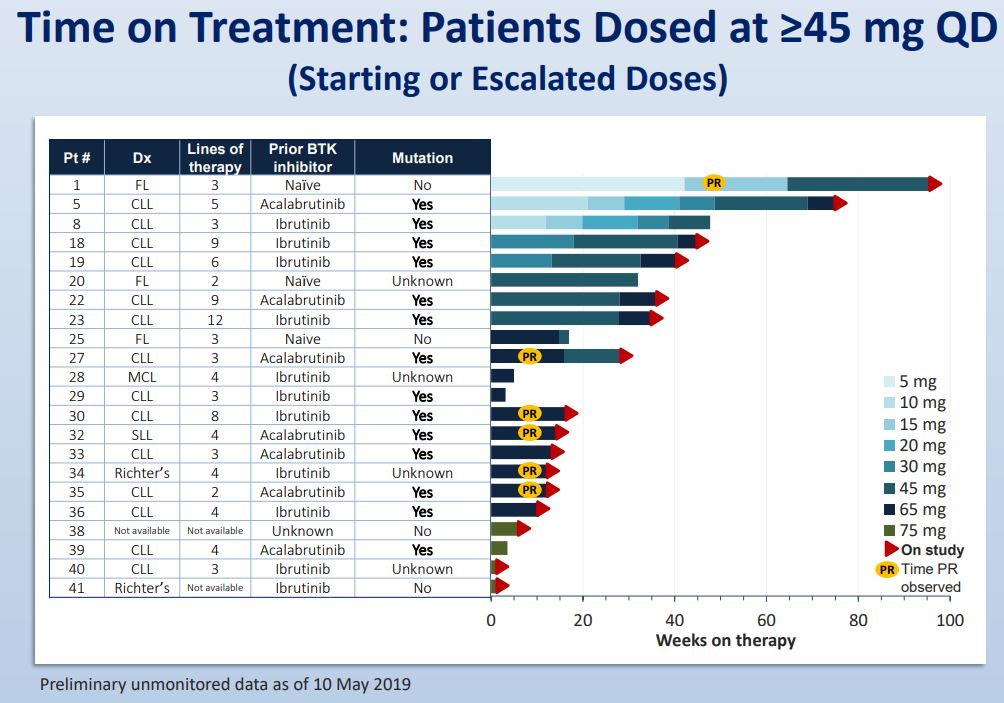