Updated data with exa-cel in sickle cell disease and beta-thalassaemia could put the fear into competitors.

Crispr Therapeutics’ allogeneic Car-T projects might still be disappointing investors, but at least its sickle cell and beta-thalassaemia asset exa-cel keeps delivering the goods. The latest data on the Vertex-partnered ex-vivo gene-edited therapy, presented at the EHA meeting over the weekend, continue to suggest that it could represent a functional cure.

The companies previously said they would file exa-cel with regulators in late 2022 and, assuming the therapy is endorsed by the FDA and payers, it could be bad news for Crispr and Vertex’s many rivals. The gene-edited sickle cell space looks particularly crowded, especially for a disorder that is relatively rare.

Like other ex-vivo projects, exa-cel, previously known as CTX001, has drawbacks, including the need for harsh pre-conditioning regimens. This leaves room for oral competitors, such as Global Blood’s GBT021601, incremental data on which also featured at EHA.

However, another oral player had a stumble: Fulcrum Therapeutics’ stock dropped 39% on Friday after its EHA update comprised just three of six patients treated with FTX-6058. The group said the other three patients were not evaluable because of non-adherence or protocol deviation.

The march of exa-cel might also put a dampener on Bluebird Bio, whose beti-cel (Lentiglobin) looks to be heading for FDA approval in beta-thalassaemia following its unanimously positive adcom vote on Friday.

Exa-cel looks slightly better on efficacy than beti-cel; the FDA has also raised concerns about a risk of cancer with Bluebird’s project, an issue that Crispr and Vertex’s contender has so far avoided.

Bluebird is also behind in sickle cell disease. A filing of lovo-cel, as the project is known in this indication, is not expected until early 2023 – a timeline that the company has stuck to despite various clinical holds.

In beta-thalassaemia, 42 out of 44 patients are now transfusion free, with follow-up ranging from 1.2 to 37.2 months. This gives an efficacy of 95%, slightly ahead of the 89% seen with Bluebird’s beti-cel.

In sickle cell, all 31 patients treated with exa-cel are free of vaso-occlusive crises, with follow-up of 2.0-32.3 months. Patients also showed a mean increase in haemoglobin levels, boosted by an increase in foetal haemoglobin. 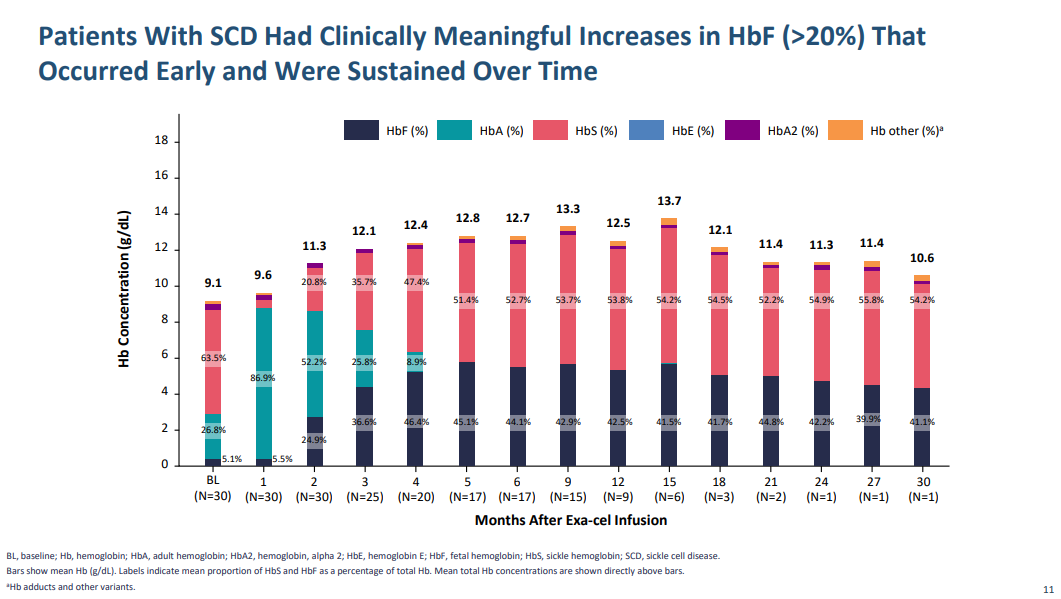 The theory is that foetal haemoglobin could compensate for the defective haemoglobin found in both beta-thalassaemia and sickle cell disease. Exa-cel is designed to increase foetal haemoglobin by reducing the expression of BCL11A, a transcription factor that normally suppresses its production.

Still, Crispr and Vertex will need to show that the effect of exa-cel is durable, and here there are reasons for caution. The sickle cell patient with the longest follow-up had haemoglobin levels at 10.6g/dl at the last count, down from 12.0g at last year’s EHA, Stifel analysts noted.

They added that this could just represent within-patient variability, but durability will be worth keeping an eye on as more long-term data emerge.

Despite this unknown, as well as the need for preconditioning and outstanding questions around pricing and reimbursement, Evaluate Pharma sellside consensus puts 2028 exa-cel sales at $1.6bn, including $1.2bn for sickle cell and the rest in beta-thalassaemia.

Still, 60% of profits on exa-cel are promised to Vertex. Evaluate Omnium's NPV analyser gives the project a $5.7bn net present value, so the Vertex deal means that Crispr's share of that, plus a $200m approval milestone, is just $2.5bn.

In this light, and with its Car-T assets once more on shaky ground, Crispr’s market cap of $4.4bn looks a little rich. So perhaps it is not surprising that the group’s stock fell 13% this morning, albeit on another day of biotech market carnage.