An increased risk of bleeding outweighs Brilinta’s benefits in a primary prevention population, but there might be a way forward in a patient subgroup.

After numerous setbacks with Astrazeneca's blood thinner Brilinta, the company finally claimed victory earlier this year in the Themis trial. But any hopes that the result could spur uptake in diabetics with coronary artery disease were dashed with the full dataset, presented today at the European Society of Cardiology meeting in Paris.

This is because Brilinta’s benefit in preventing cardiovascular events was more than offset by an increased risk of major bleeding. Dr Dheepak Bhatt of Brigham and Women's Hospital, Boston, cautioned against using the drug in this primary prevention population during an ESC press conference today.

Still, there is a glimmer of hope for Astra. A prespecified subgroup analysis, published in The Lancet, found a net benefit in patients who had previously undergone a percutaneous coronary intervention (PCI), who accounted for 58% of the trial’s population.

The 19,000-patient Themis trial tested Brilinta plus aspirin versus aspirin alone in patients with stable coronary artery disease and diabetes who had not previously had a heart attack or stroke. Its primary endpoint was a composite of cardiovascular death, myocardial infarction or stroke.

On this measure, at least, Themis was a success. There was a 10% reduction in the risk of an event in the Brilinta arm, which hit statistical significance with a p value of 0.04.

However, there was no difference in the risk of cardiovascular death: the result was driven by lower incidences of myocardial infarction and stroke in the Brilinta cohort. The full data were also published today in the NEJM.

More worryingly, the benefit came with a significantly higher risk of major bleeding, the primary safety outcome. The incidence of intracranial haemorrhage was also increased with Brilinta. And, although there was no significant difference in rates of fatal bleeding, the number of these events was higher in the Brilinta group.

However, Brilinta should be considered in patients who have previously undergone PCI, Dr Bhatt concluded. Essentially, focusing on these patients selected for those with a lower bleeding risk as they had previously been able to tolerate dual antiplatelet therapy comprising aspirin and P2Y12 inhibitor like Brilinta, he explained.

PCI patients not only showed a benefit on the primary endpoint, but also a net clinical benefit once bleeding was taken into account. 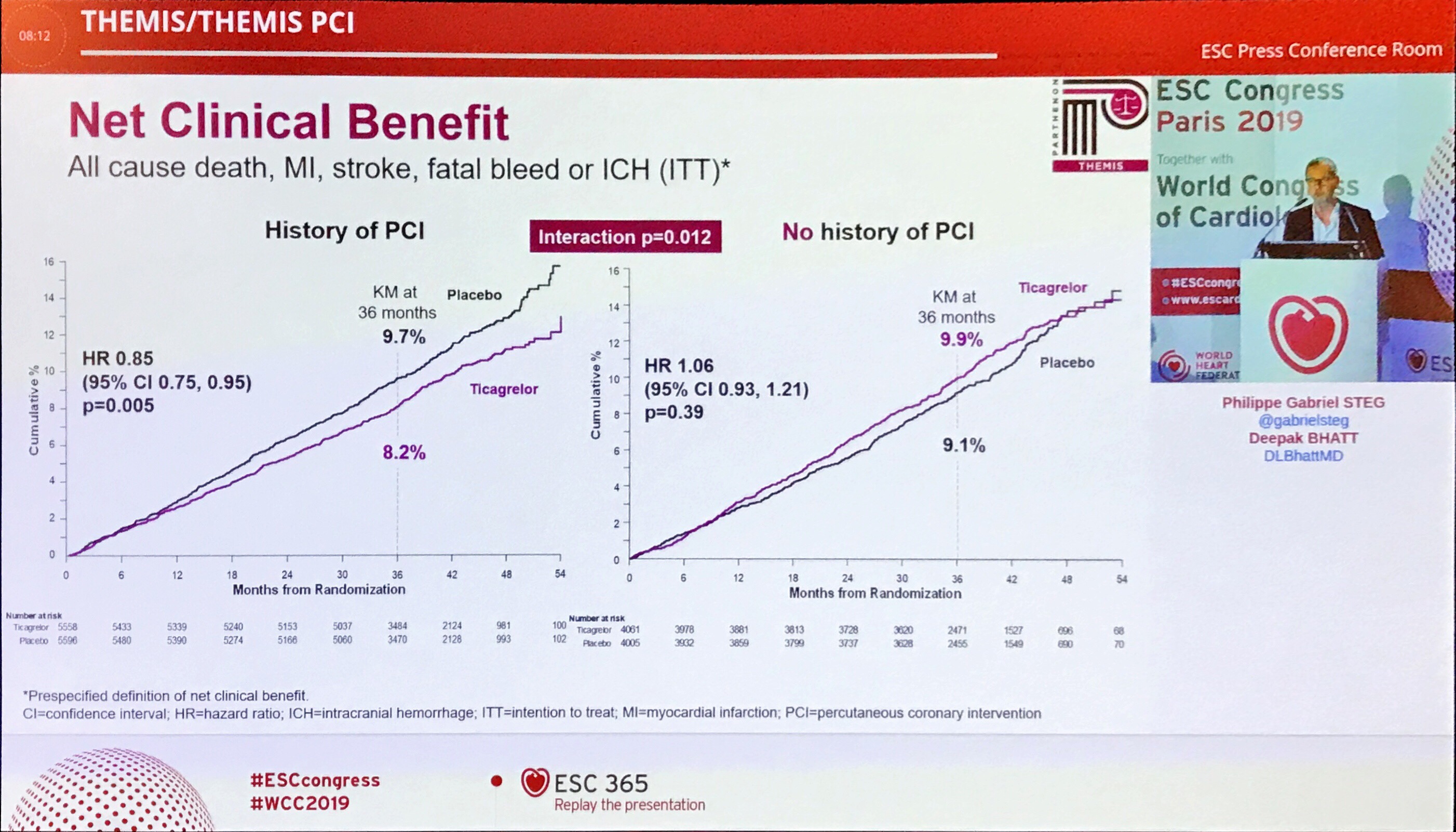 PCI patients account for a large proportion of those with diabetes and coronary artery disease, but whether this will be enough to justify Astra’s investment in Brilinta is another matter. Themis was the penultimate instalment in the company’s Parthenon programme, which encompassed 80,000 patients, but the studies have now mostly fallen short.

The remaining trial, Thales, which is evaluating Brilinta in stroke prevention, is set to read out in the first half of next year.

Astra had once had high hopes for Brilinta. When the UK group was fending off Pfizer’s advances five years ago it suggested peak sales of $3.5bn for the drug. This number now looks like pie in the sky: EvaluatePharma consensus forecasts that Brilinta revenues will hit $2.2bn in 2023 before falling away. And the Themis data look unlikely to stop this slide.

This story has been updated to include details on the Thales trial.