With strong data in hand Astrazeneca now needs to get cardiologists on board, and stay ahead of Lilly and Boehringer.

Getting cardiologists to change their practices can be an uphill battle. At least Astrazeneca now has an effective weapon in this fight in the shape of strong results from the DAPA-HF study of its SGLT2 inhbitor Farxiga in heart failure with reduced ejection fraction (HFrEF).

The trial evaluated both patients with and without diabetes, so should move the drug squarely into the cardiology realm. Importantly, full data presented at the European Society of Cardiology meeting today found similar outcomes in diabetics and non-diabetics, assuaging any concerns that the benefit might have been driven by the former.

Overall, patients receiving Farxiga plus standard of care had a 26% reduction in the primary endpoint – cardiovascular death, hospitalisation for heart failure, or an urgent heart failure visit – versus those receiving standard of care alone. The difference was highly statistically significant, with a p value of less than 0.0001.

Farxiga also performed well on all components of the composite endpoint, as well as on patient symptoms. 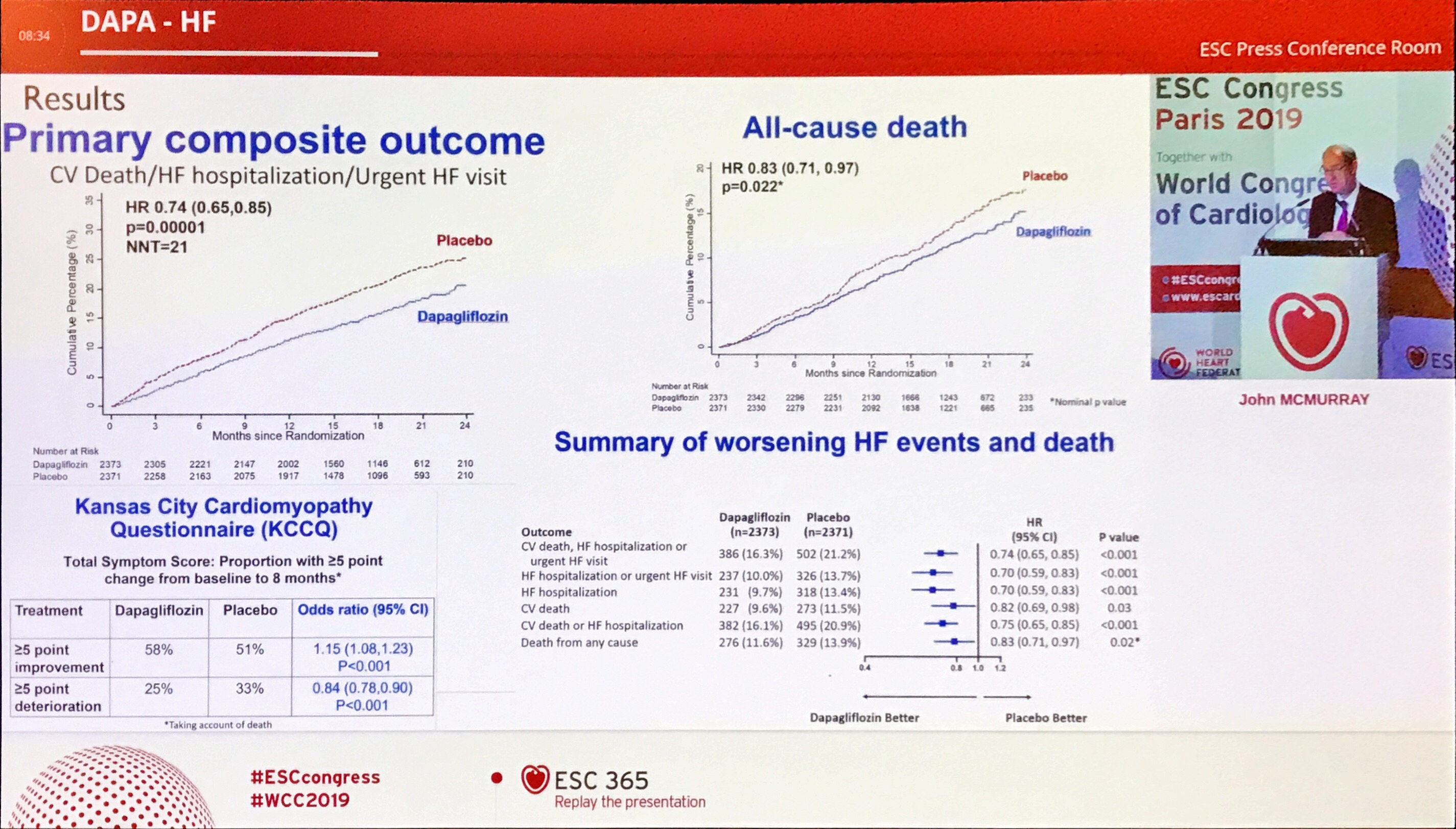 As for the results in diabetics versus non-diabetics, these were “identical” with respective hazard ratios of 0.75 and 0.73, the study’s lead investigator, Dr John McMurray of the University of Glasgow, told an ESC press conference today.

Around 42% of patients in DAPA-HF had type 2 diabetes, which is representative of the HFrEF population.

Dr McMurray said Farxiga’s mechanism in non-diabetic patients was still not fully explained, but added that there were several theories, including that the drug might have a protective effect on the kidneys or alter cardiometabolism.

Farxiga’s effect looks similar to, if not better than, that seen with Novartis’s Entresto in HFrEF; the latter decreased cardiovascular death and hospitalisations by 20% in the Paradigm-HF trial.

Rather than being rivals, however, Farxiga and Entresto could be used together because of their different mechanisms, Dr McMurray contended. He added that around 11% of patients in DAPA-HF had also received Entresto, and had seen a similar benefit with Farxiga as those not on the Novartis drug.

Farxiga might soon have competition, though, in the shape of the other SGLT2 inhibitors. Lilly and Boehringer’s Jardiance is the biggest threat, and is already in several studies in heart failure patients both with and without diabetes (Astra’s Farxiga gets the jump on Jardiance, August 20, 2019).

Jardiance is set to be the biggest in the class in 2024, according to EvaluatePharma sellside consensus, with forecast sales that year of $3.2bn versus Farxiga’s $2.6bn. Neither of these estimates includes heart failure, so presumably there could be huge upside if the drugs can make a mark here.

The first cardiovascular outcomes trials with Jardiance are not due until next year, so Astra now has a chance to get a head start. Its first mission: convincing conservative cardiologists.