With decent efficacy and clean safety in the Orion-11 trial, questions now turn to pricing and whether The Medicines Company will be taken out.

Attendees at the European Society of Cardiology meeting already knew that the first pivotal trial of The Medicines Company’s long-acting PCSK9 inhibitor inclisiran was a hit. But they were keen to see just how much the project lowered cholesterol – and, perhaps more importantly, whether it could do so safely.

Full data unveiled today, from the Orion-11 trial, provided good news on both fronts. Safety looks clean, so far, and similar LDL-lowering as that seen with current anti-PSCK9 MAbs should allow inclisiran to compete. Notwithstanding hypothetical questions over long-term safety, the results will add to speculation that The Medicines Company could soon be acquired.

Merck & Co has been mentioned as a potential buyer, perhaps partly fuelled by the fact that The Medicines Company’s chief executive, Mark Timney, used to work for the pharma giant.

“It’s not unreasonable, when you get a product this exciting, that there’s going to be interest,” Mr Timney told Vantage during ESC. He would not comment on any specific takeout speculation, and said his group was preparing to commercialise inclisiran itself, but said he would act in the best interest of shareholders if an offer did come in.

Whichever company ends up commercialising inclisiran, it will look to press home the project’s convenience advantage: the small interfering RNA is given via twice-yearly subcutaneous injection, while the PSCK9-lowering MAbs, Amgen’s Repatha and Sanofi/Regeneron’s Praluent, are subcutaneously injected every two weeks or monthly. This should also lead to better adherence to inclisiran and, potentially, better outcomes.

Pricing will be another big factor in how the market shakes out. The disappointing commercial performance of the PCSK9 MAbs has been partly blamed on their initial prices being too high.

Again, Mr Timney was cagey here, saying it was too early to talk about inclisiran’s price tag. But he did say that The Medicines Company would first focus on what is a reasonable out-of-pocket cost for patients. “Based on that, we’ll work backwards with the payer on what population they want treated. And then we’ll work out the price.”

Inclisiran still needs to get approved before all this comes into play. The Medicines Company plans to file the project in the US by the end of 2019, and in Europe in early 2020, based on the Orion-11 data as well as results from the upcoming Orion-9 and Orion-10 trials (Medicines Company goes on the hunt for heartening Orion data, July 10, 2019).

The initial submission will be for LDL lowering in the three patient populations enrolled in these trials: atherosclerotic cardiovascular disease (ASCVD), patients at high risk of ASCVD, and those with familial hypercholesterolaemia.

The Orion-11 details presented today bode well for inclisiran’s chances. The 1,600-patient study enrolled mostly patients with ASCVD, while a small proportion, around 13%, were high-risk primary prevention patients. Its primary endpoints measured LDL cholesterol lowering, both at day 510, and the average over day 90 to 540. 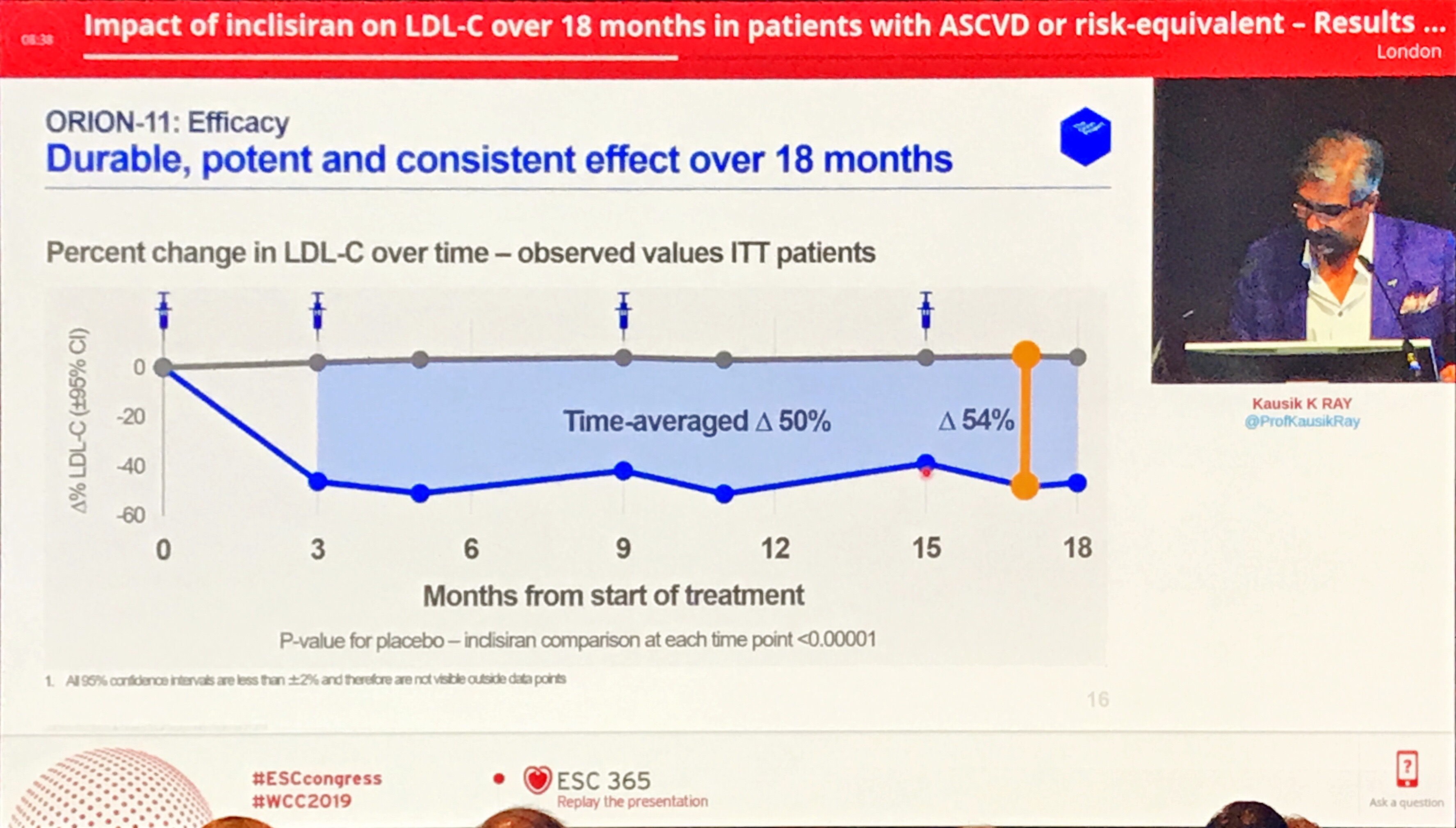 Notwithstanding these, the data put inclisiran in line with Repatha and Praluent, which showed placebo-adjusted LDL lowering of 55-58% in their long-term outcomes trials.

A result in this ballpark was probably expected given inclisiran’s mechanism, so safety was the main focus going into the Orion-11 readout, especially given kidney and liver toxicity worries with Alnylam’s givosiran, which shares the same Galnac platform. In the event, inclisiran’s safety looked good and, notably, there was no evidence of liver toxicity. 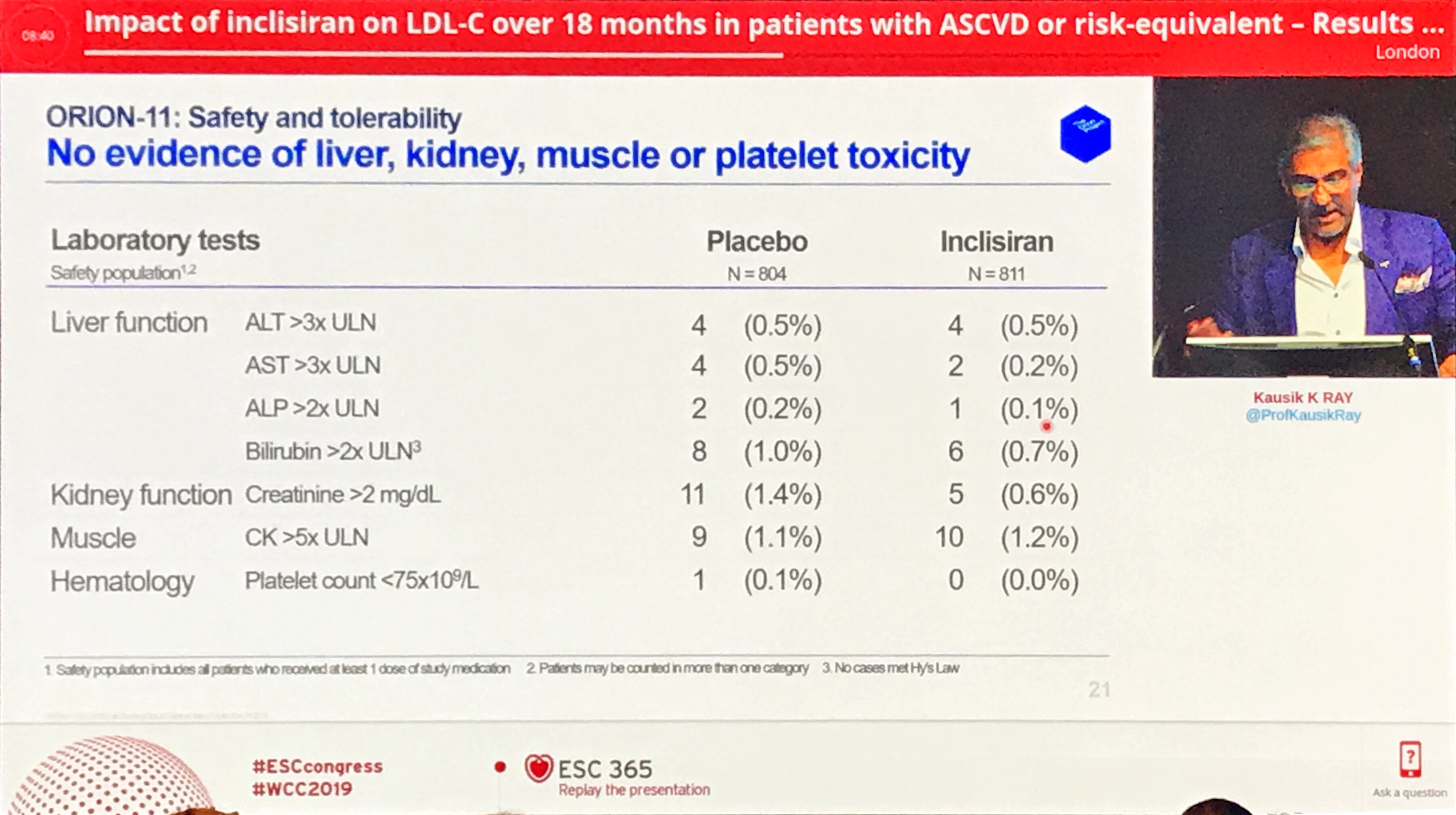 Still, not everyone is completely convinced, yet, on the safety question. Professor François Schiele of the CHRU Besancon, an ESC spokesperson, said during a press conference yesterday that he was “quite impressed” with the Orion-11 data, and admitted that so far there had been no toxicity signal. But he added that the 18-month study had not been long enough to prove definitively that there were no issues with inclisiran.

“For such a drug with such a long duration of action, we don’t want to inject it without being absolutely sure there’s nothing you can regret,” he concluded.

Mr Timney said he had been surprised by these comments, but conceded they were understandable given inclisiran’s novelty. But investors will no doubt be closely watching safety as the next Orion trials read out, possibly at the American Heart Association meeting in November.

Another question will be whether inclisiran, like the other PCSK9s, lowers the risk of cardiovascular events. Here, there were promising data at ESC, with the caveat that these came in a small number of patients from an exploratory analysis. 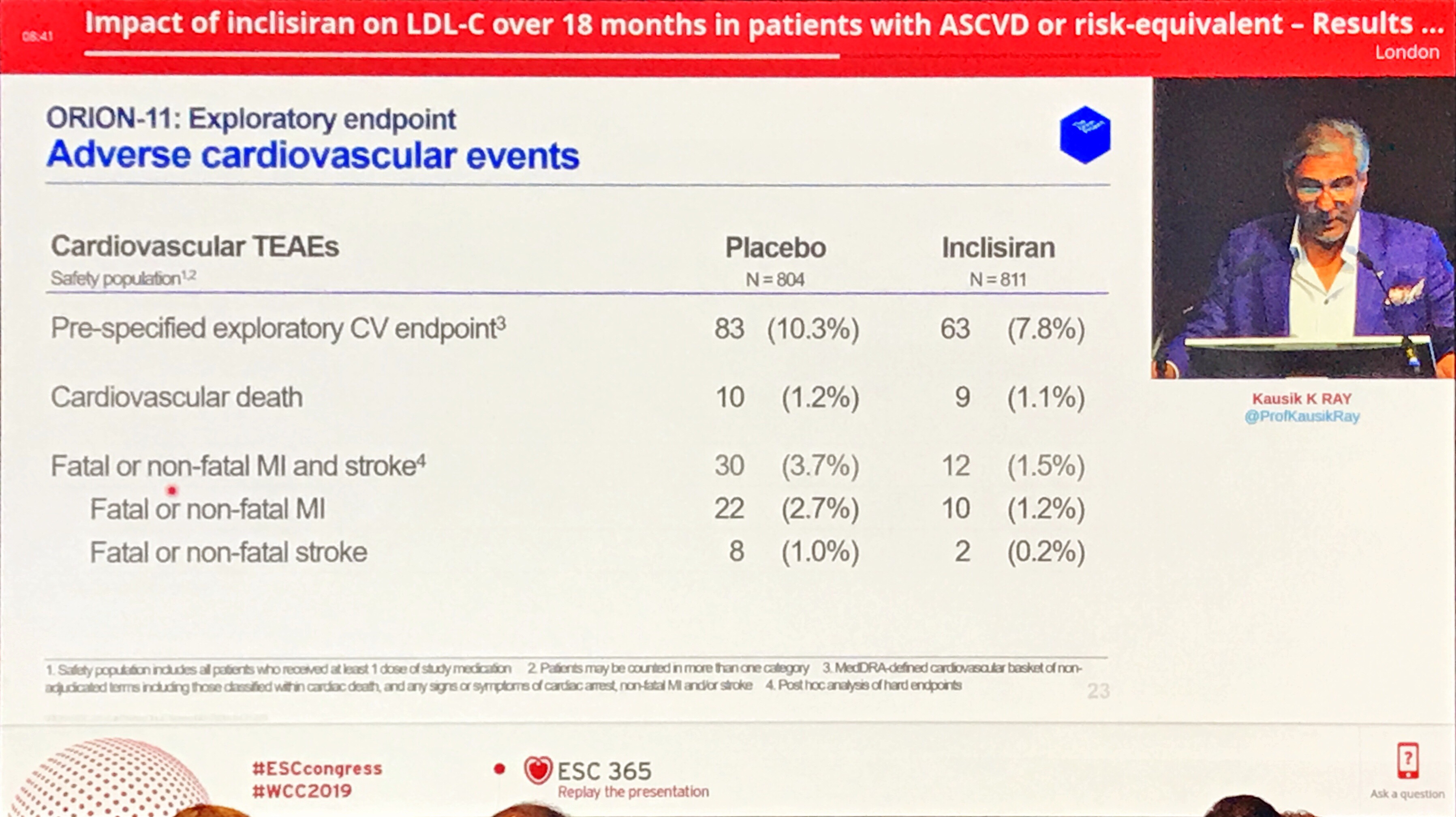 Evercore ISI’s Umer Raffat calculated that this translated to a 24% cardiovascular benefit, mainly driven by a reduction in myocardial infarction and stroke.

However, this will need to be replicated in inclisiran’s ongoing 15,000-patient cardiovascular outcomes trial, Orion-4, which is enrolling and should yield data in 2024.

Perhaps, by then, inclisiran will be in a bigger company’s hands. But for now, the Orion-11 data should provide a boost to The Medicines Company.

No reason for partners to jump into Esperion just yet

Pfizer says no go for boco