Before today’s trial readout no one was sure how remote ischaemic conditioning worked; now the investigators are pretty certain that it doesn’t.

Cellaegis Devices had high hopes for the Condi-2/Eric-PPCI study. The data, presented today at the meeting of the European Society of Cardiology, were supposed to enable US approval of its AutoRIC device next year, a guideline change spurring greater uptake of the product, and a funding round for the private group.

Instead the investigator-initiated trial failed, with investigator Professor Hans Erik Bøtker of Aarhus University stating: “Our trial provides definitive evidence that remote ischaemic conditioning offers no benefit on clinical outcome.” It is unclear where Cellaegis can go from here.

Remote ischaemic conditioning is a technique whereby blood supply to a limb is repeatedly temporarily cut off, using a device like a blood pressure cuff. The AutoRIC machine automatically performs four cycles of five minutes’ occlusion followed by five minutes’ reperfusion. CE marked in 2012, it is the only such device on the market or in development.

The theory is, it seems, wrong. The trial, an amalgamation of what were originally two independent trials in a total of 5,401 patients, showed that 239 patients treated with Cellaegis’s device (9.4%) suffered cardiac death and hospitalisation for heart failure at one year. Among the control group, who underwent a sham treatment with AutoRIC, the figure was 220 (8.6%), giving a p value of 0.32.

Not only was there no statistical difference between the groups, the treatment group was numerically worse. 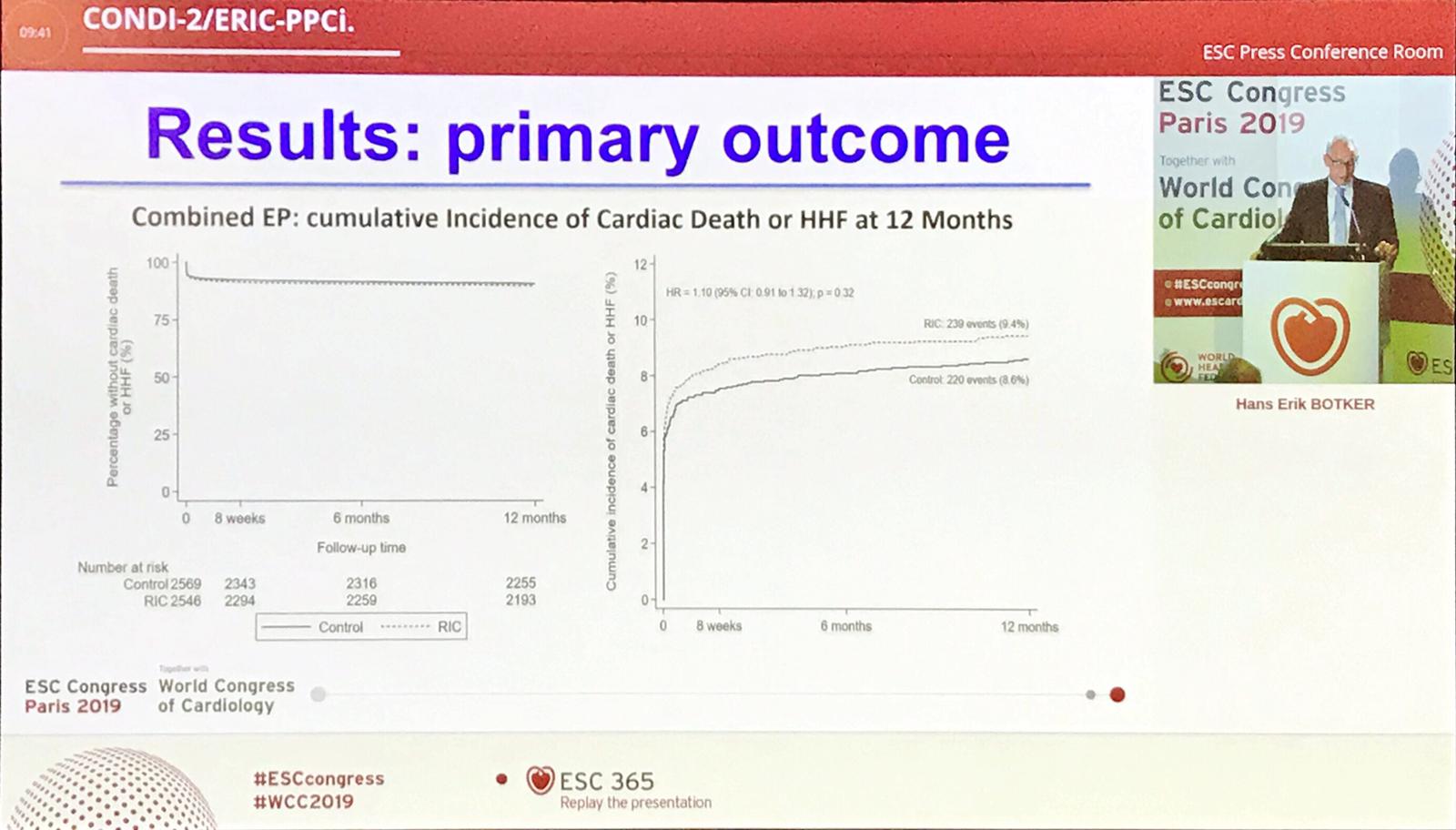 So now what? The usual go-to when a trial fails, data-mining among subgroups, was scotched by Professor Bøtker at a press conference this morning. He said that none of the prespecified subgroups, which stratified patients by age, diabetes status and time to treatment among other things, showed a benefit for remote ischaemic conditioning.

Perhaps another trial, then, this time in the US. Cellaegis’s aim of getting US approval based on a European trial was always a bit dicey – though not impossible, had the trial hit – and a US-based trial, perhaps with a different endpoint, might get the job done.

The trouble is that US approval was predicated on guideline changes. Speaking to Vantage last week, Rocky Ganske, Cellaegis’s chief executive, laid out the company's plan: Condi-2/Eric-PPCI hits, the European Society of Cardiology recommends use of the AutoRIC in its guidelines, US cardiology groups follow suit, US doctors start clamouring for the product, and the FDA succumbs to the pressure and awards approval.

“What nobody wants is for something to move into the US guidelines without an approval in place,” Mr Ganske said.

The trial failure will probably have dismal effects on Cellaegis’s sales in the territories in which it is already approved – Europe and Canada. The company has sold about 700 AutoRICs over the years.

The system sells for $3,500 when bought outright, but many of Cellaegis’s customers lease the machines. It seems likely that the Condi-2/Eric-PPCI data might lead to at least some of these leases being terminated. Demand for the single-use cuffs that go with the product, which sell for around $200 apiece, might also dwindle.

Lastly, the company’s intention to raise money on the back of the data is now probably done for. The company last closed a venture round in 2017, with Mr Gaske saying that it was “waiting for the data to drive an improved outlook for the company”, and enable it to complete a VC round early next year.

One of the group’s backers is Asahi Kasei’s cardiology-focused subsidiary Zoll Medical. Asked last week if Zoll was a potential acquirer, Mr Ganske said, “I would say they wouldn’t be an investor if they weren’t.” A trade sale is presumably also now less likely. One way and another, Cellaegis’s future looks murky.