Esmo 2019 – Clovis is running out of waves to catch

In prostate cancer Clovis could be adopting a more realistic regulatory stance with its Parp than Astrazeneca and Merck & Co. In the long run will it matter much?

Amid much fanfare around successful pivotal trials of Lynparza and Zejula at this year’s Esmo Congress, Clovis Oncology struggled to get much attention for its own Parp inhibitor, Rubraca, despite also presenting registrational data. The situation echoes the larger reality here: as a small fish in this particular pond, Clovis is struggling to compete.

The small biotech’s main reveal at Esmo was the full Triton2 dataset, on which Rubraca will be filed for accelerated approval in a third-line prostate cancer setting. A look at the developing results from Parp inhibitors in this tumour type suggests that Rubraca is just as effective as its rivals – caveats notwithstanding – while Clovis’s focus on patients with BRCA mutations seems an arguably more realistic regulatory strategy than Astrazenca's (Esmo 2019 – A place for Parps in prostate cancer, September 30, 2019).

The potential presence of Lynparza on the market in an earlier setting than Rubraca is ultimately the more important point here – Astra's Profound trial was conducted in a second-line setting – and there is little evidence to support retreating patients with a Parp inhibitor. But, should Astra and Merck’s determination to seek approval in a broader patient group slow Lynparza’s progress with regulators, Clovis might achieve a few more months alone on the market.

A look at the data on Parp inhibitors in prostate cancer shows that these agents have generated roughly similar response rates, in patients with BRCA1 and 2 mutations. This gene is associated with the strongest responses to Parp inhibition, although other mutations related to homologous recombination repair (HRR) mechanisms are thought to confer sensitivity – a hypothesis that was most definitively confirmed in ovarian cancer over the weekend.

In prostate cancer, however, the role of other genes is far less clear. This is why Astrazeneca’s assertion that it will seek approval in all patients with HRR associated genes is controversial; on an investor call yesterday executives left little doubt that this was in fact their intention.

“We designed Profound specifically with the intention that, if both cohorts were positive, we would be seeking a label in the HRRm population,” said Dave Fredrickson, head of oncology for Astrazeneca. 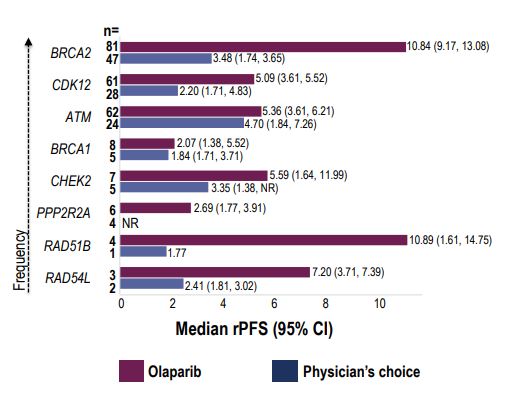 Very little breakdown of response by gene mutation type was given at Esmo – Astra said this analysis is still being undertaken – although it is clear that regulators will think hard about a broad label. The ATM cohort is important because these patients were combined with BRCA1/2 patients for the primary analysis of Profound; while these patients seem to respond to Lynparza, very similar responses were seen in the control group, which was either Zytiga or Xtandi.

Clovis also enrolled these patients in Triton2, but Pat Mahaffy, its chief executive, made it clear that the company had no expectation of approval in this subset.

“It’s a little early to speculate on the label, but it will be limited to BRCA mutants,” he told investors on a call over the weekend.

Given that Clovis desperately needs to get Rubraca to market before Lynparza, not stretching the data too far here is probably wise. Particularly as the company’s chances to catch up are fairly distant: pivotal, second-line prostate cancer data are unlikely to emerge before 2022.

In ovarian cancer the company is also lagging: a phase III study testing Rubraca in combination with Opdivo, in a front-line maintenance setting, are slated for 2024.

Sellside forecasts from EvaluatePharma show the Parp market growing strongly, and it is estimated to be worth $5.7bn by 2024. But Rubraca numbers have been falling, along with Clovis’s valuation; its market cap now sits at a mere $215m, after plunging 87% in the last 12 months. A long-rumoured takeout of the company is looking ever more unlikely, particularly since any buyer could presumably pay considerably less in another 12 months.

Esmo preview – Immuno-oncology and beyond