The Prima trial delivers a convincing win for Glaxosmithkline’s Parp inhibitor Zejula, which looks to have a good chance of winning a broader label in ovarian cancer.

To help justify the $5.1bn Tesaro price tag Glaxosmithkline really needed the Prima study to show that Zejula could benefit a much broader set of front-line ovarian cancer patients. Data presented today at Esmo seem to do just that.

The Prima study, one of three front-line ovarian cancer trials unveiled at a presidential session in Barcelona today, was the purest test of Parp inhibition in this setting. It evaluated Zejula versus placebo as maintenance in patients who responded to front-line platinum chemotherapy, a setting in which Lynparza set a new standard of care at last year’s conference.

The Astrazeneca/Merck & Co drug is only approved in BRCA-positive patients, however. Prima, like the Paola-1 and Velia studies also presented today, recruited all comers. All three trials analysed the data using various prespecified subgroups, based on patients’ mutation status, and all confirmed a benefit in those with other types of damaged DNA repair pathways.

Developers hope that these studies will convince regulators to approve Parp inhibitors for all patients front line, as they are in the relapsed setting. In the Prima study, across all patients, Zejula reduced the risk of disease progression by 38% versus placebo, a result that gives Glaxo a good chance of achieving that goal. 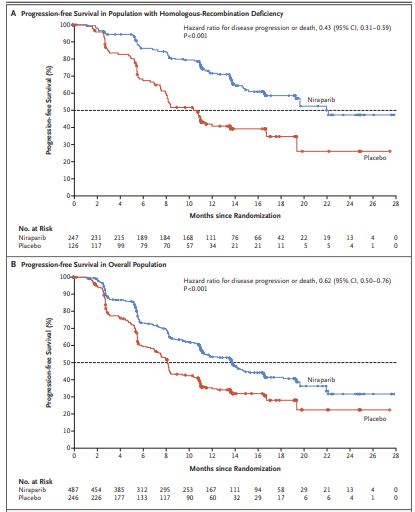 The result was driven by BRCA-positives and patients with other forms of homologous recombination deficiency (HRD), although notably the company managed to achieve a 32% reduction in the risk of progression in a group described as "HRD-proficient", essentially negative.

This is only an exploratory analysis, but Dr Susana Banerjee of the UK’s Royal Marsden Hospital, who was invited by Esmo to review the three studies, described this finding as “very interesting”.

“This suggests we should give a Parp inhibitor to all comers. But we need to understand this data in more detail, because the next question is: are we ready to deliver HRD testing in practice?”

The lack of a widely available and reliable test of patient’s HRD status will probably help the case for a broad label here. Glaxo could also benefit from being the only company with a successful single-agent maintenance study: in the Paola-1 trial Lynparza was given on top of Roche’s Avastin (Esmo 2019 – Lynparza pushes Parps forward again, September 28, 2019).

Substantial differences in design make it very hard to stack these studies up against each other, though a look at the various hazard ratios makes for an interesting comparison, all the usual caveats notwithstanding.

The difference in hazard ratios between Zejula’s HRD-proficient patients, from which the 32% risk reduction is derived, and HRD-negative finding in Paola-1, stands out here.

“We’re pretty sure this is a drug effect" rather than being down to differences in trial design, Axel Hoos, head of oncology for Glaxo, told reporters this morning. “It could be a secondary mechanism: Zejula has three to four times higher tissue penetration, so we are getting more into the tumour. Obviously this is just a hypothesis but there are some preclinical data to support that.”

Dr Banerjee commented that in the recurrent setting Parps were considered largely equal, so Glaxo will have to work hard to convince oncologists on this point. But it is clear that Prima has given the company’s prospects in this space a huge boost.